Economic development - is it possible to grow faster, smarter, better?

Economic development in the Balkans: Is it possible to grow faster, smarter, better?
By Milica Uvalic

Economic development is usually understood as a process which provides a general improvement of economic, political and social well-being to a country’s citizens. In the Western Balkans the record of economic development over the last quarter of a century has been rather disappointing. According to recent calculations by Branko Milanovic, two countries in the region - Bosnia and Herzegovina and Serbia - are in the group of transition economies that are worst off, since as of 2013 they have still not reached real GDP per capita achieved back in 1990.The poor development record of the Western Balkans can partly be explained by the unfortunate events in the 1990s – the break-up of the political and economic union, multiple military conflicts, international sanctions and other adverse external shocks – which are also largely responsible for high economic instability, slow progress in transition-related economic reforms and delayed integration with the European Union (EU). After the troublesome 1990s, the new millennium seemed to promise improved prospects of catching up of the Western Balkans with the more developed parts of Europe. During 2001-08, the countries in the region experienced fast economic growth, gradual macroeconomic stabilization, major inflows of foreign direct investment (FDI) and implemented many important economic and institutional reforms. The fresh start in economic development was sustained by a new strategy of the EU which facilitated economic integration of the Western Balkans through increasing trade, FDI, banking and financial integration.

These positive trends were interrupted by the global economic crisis which severely hit the Western Balkans in late 2008. Thereafter, the Western Balkan countries have registered negative or much lower real GDP growth rates in comparison to the pre-crisis period (see Figure 1). Except for Croatia (already an EU member state), the gap in economic development with respect to the EU remains substantial: GDP per head (in Purchasing Power Standards) in 2013 ranged from 22 per cent in Kosovo to 42 per cent in Montenegro of the EU-28 average. 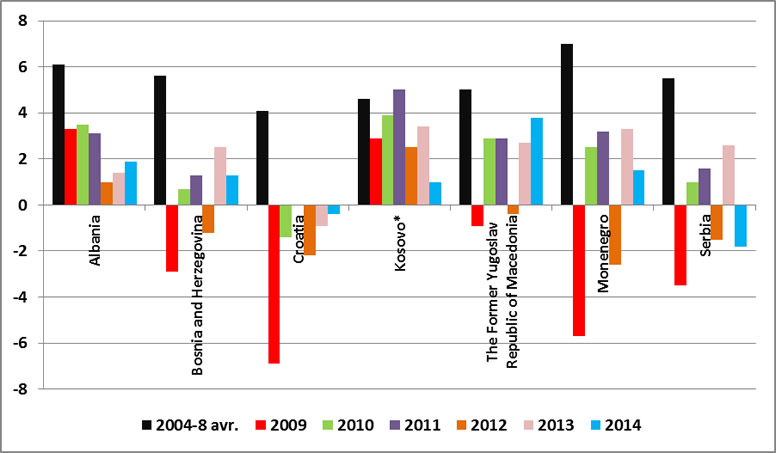 The ongoing economic crisis brought to the surface many structural problems of the Western Balkans that have been accumulating during the past two decades. The Western Balkan countries have had large external imbalances that have led to increasing trade and current account deficits and rising external debt. Their labour markets have been characterised by “jobless growth” that has brought exceptionally high unemployment and low employment rates. A further problem regards structural changes: the Western Balkans have become prevalently service economies after a prolonged process of deindustrialization. Although some deindustrialization was inevitable in all former socialist countries at the beginning of the transition since they had an oversized industrial sector, in the Western Balkans the process continued also in the 2000s. This contributed to a decline of the share of tradable goods, dominated by manufactures, thus impeding faster export growth. By 2013, the share of manufacturing value added in the seven Western Balkan countries was, on average, only 12 per cent of GDP, therefore lower than in many EU countries, particularly the new member states (see Figure 2). The structure of foreign investment has greatly contributed to such patterns of structural change, since around two thirds of FDI has gone into non-tradable services - banking, telecommunications, retail trade, real estate. 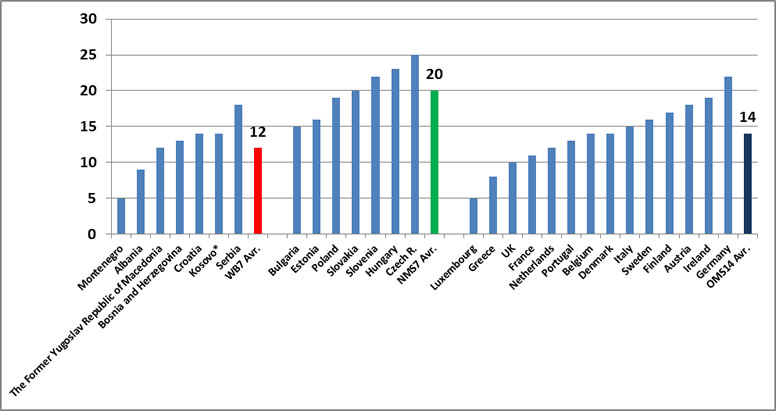 Source: Compiled on the basis of World Bank’s World Development Indicators; the countries not included are those for which data for 2013 were not available.

How can we ensure faster economic development of the Western Balkan countries? Given the high degree of integration of the Western Balkans with the EU economy, the immediate growth prospects are in part beyond the direct control of their respective governments, as economic recovery will to a large extent depend on future growth in the European Union. At the same time, FDI is unlikely to return in larger amounts soon, since in most Western Balkan countries privatization opportunities have been mostly exhausted, while FDI at the global level has not yet fully recovered – in early 2015 global FDI flows were still only 66 per cent of their peak in 2007. Since short-term prospects for growth in the EU are for the moment uncertain while major FDI inflows are unlikely in the medium term, the Western Balkans will need to rely much more on their own forces, both regarding investment finance and economic restructuring policies. From today’s perspective it may be possible to grow faster, smarter and better, but the Western Balkans will need to radically change their economic development strategy at both the regional and national level.

The South East Europe 2020 Strategy contains many important elements of the new development model that could indeed deliver faster economic growth. The Strategy seeks to stimulate the key long-term drivers of growth through a set of interlinked development pillars which include specific sectoral dimensions of regional cooperation. The “changed gear” can indeed come from more regional cooperation in trade, investment, employment, energy, transport, R&D, innovation, social development and governance. Smallness and fragmentation are serious handicaps of the Western Balkans that cannot be easily overcome, unless they engage in more intensive forms of regional cooperation. The RCC’s Balkan Barometer based on a broad public opinion survey of the population in the SEE region in 2015 offers some important messages in this regard: as much as 76 per cent of the population in the region thinks that regional cooperation can contribute to an improvement of the political, economic and security situation in their place of living.

However, the key instruments for achieving the objectives of the SEE 2020 Strategy and for resolving the crucial economic problems in the Western Balkans are in the hands of the national governments, that need to devise their own development strategies in line with specific priorities. In view of the extreme deindustrialization that has taken place in the region, the new growth model has to ensure one common objective: the strengthening of the real sector of the Western Balkan economies, as this is a crucial element for improving export performance and increasing competitiveness on global markets. This will require a more targeted industrial policy that would strengthen key manufacturing industries, stimulate diversification and upgrading of the industrial  base and facilitate reindustrialization.

In many countries worldwide, governments have played a key role in inducing structural change, sectoral upgrading and economic diversification in order to promote growth, employment and an increase in productivity. How to define a sensible industrial policy is a major policy challenge, but should be worked out in line with comparative advantages of each country. The reindustrialization of the Western Balkans would be in line with recent EU objectives that aim at increasing the share of manufacturing value added from the current 15 per cent to 20 per cent of GDP by 2020. If reindustrialization is a key element for strengthening EU competitiveness, so much the more it needs to be an explicit objective of the Western Balkans. A regional industrial policy that would facilitate the creation of trans-national networks and supply chains would also be welcome: multinational companies created by enterprises from several Western Balkan countries are bound to be more competitive on EU markets than small national firms. As stressed in various recent papers by Joe Stiglitz, you need industrial policy to allow countries to catch-up. This seems particularly relevant for the Western Balkans.

Milica Uvalić is Professor of Economics at the University of Perugia, Italy (since 1992). Formerly she was member of the UN Committee for Development Policy (2008-12), Public Policy Scholar at the Woodrow Wilson Centre in Washington DC (2009) and Assistant Minister in the Federal government of FR Yugoslavia (2001). She has published extensively on various topics related to the transition in Eastern Europe, including “FDI into transition economies: Are the Balkans different?” (with S. Estrin, 2014); The Social Consequences of the Global Economic Crisis in South East Europe (edited with W. Bartlett, 2013); Serbia’s Transition – Towards a Better Future (2010); and Western Balkans’ Accession to the European Union (edited with B. Cerovic, 2010).

Winner of the Round 2, Voice of the Region Competition

Today I spent yet another day in Bosnia and Herzegovina, a country with obviously no clear vision of how to break the chains of a heavy burden of unemployment and the perpetual gap between the monthly costs and minimum wage. The story of economic development is started off by endless and boring introduction about the low income and lack of jobs - it is not difficult to tell where I live. 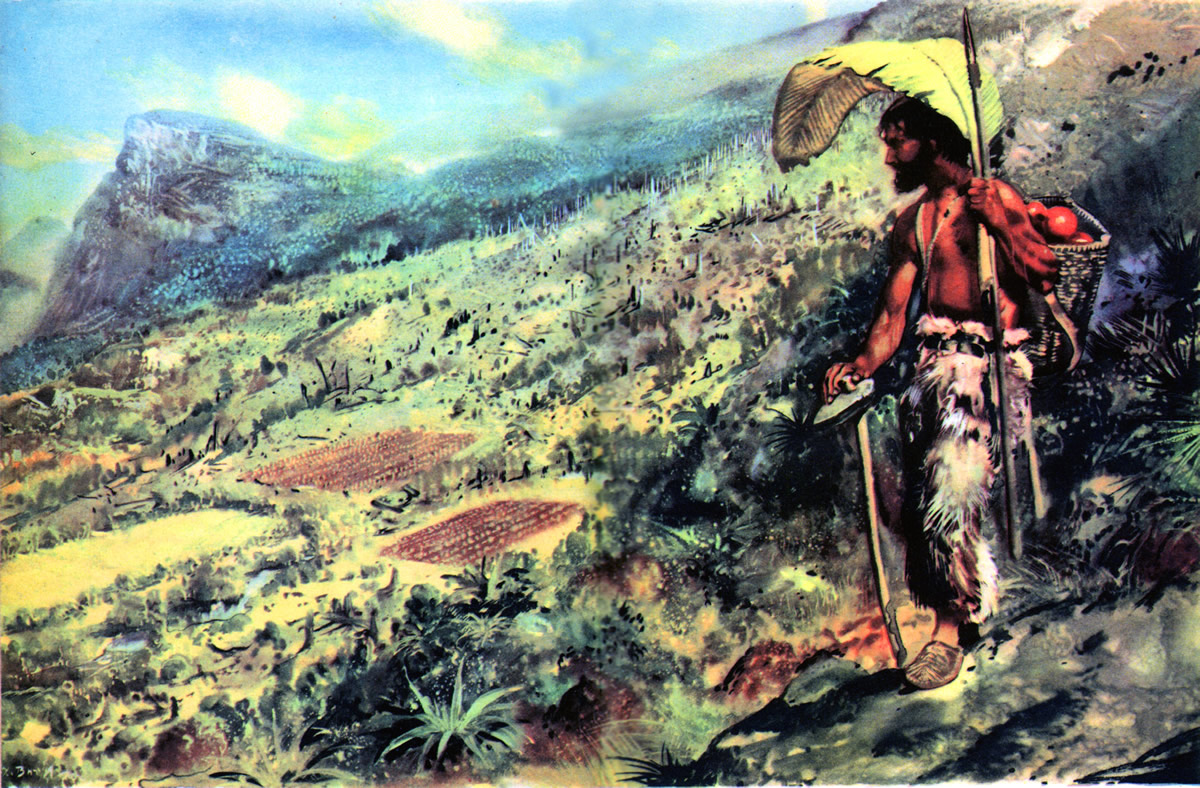 The social moment is mine, and our common economic prison. The entrepreneurial spirit is castrated in the environment with no shortage of scepticism, and a lack of support to start-ups and small businesses. The bottom of economic depression is slowly coming into our sight and we often hear it screaming: find a job in public administration!

In the gutter of the crisis there are those trying to build islands of economic hope. Today, I made a visit to such an island - a close friend of mine who two years ago decided not to opt for steady income in one of the many institutions in BiH as a life support but to start her own business producing handmade glass items. Her decision brought her a lot of uncertainty and fear but also joy of earning her first real money, and love for what she does. Our friendship faced the challenge of a shortage of time.

Today’s meeting was a brief one and the conversation constantly interrupted by her client’s phone calls. I felt a bit angry over the fact that the space for friendship was narrowing but also happy to see her personal and economic development which could be a good example for us all. The brisk exchange of words and thoughts threatened to break the boxes with glass products - it has been a while since we saw each other. The friendship could be seen as a small business – fragile and beautiful, enchanting piece of glass one should carefully handle until it gets stronger.

Looking at her now and then I am getting more and more convinced that we need more courage and support to start something on our own. I am sure that it is only by ourselves alone that we can grow economically. I believe that it will be possible to see the future on the horizon again only by linking our own individual islands.