Corruption – cancer of each society?

Corruption – cancer of each society?
By Tilman Hoppe

The RCC has asked me to offer some reflections on the question: “Corruption – a cancer of each society?” My answer is: No, corruption is not a cancer of each society. Of course, there are political finance scandals in the so-called “Western countries”, such as France, Germany, and the United Kingdom. And corporations from even “corruption-free” countries such as Finland or Sweden are entangled in foreign bribery investigations. However, only cynical politicians would present corruption as a problem that is of a similar scale in all countries.

For most people in South-Eastern European countries, having to pay bribes to receive anything at all from the state is a dire reality—a passport; education; medical services; police protection; or justice. Statistics are able to capture this reality in numbers. Yet, statistics cannot capture the human costs of each such incident, of every parasite posing as a “public official”. Having to bribe undermines human dignity. It breaks human beings.

Can we break the corrupt public officials instead, even though corruption is often described as an unbreakable pattern?

The European Union; the United Nations; the World Bank; and other international organisations and donors have spent hundreds of millions of Euros on anti-corruption reforms all over the world. These reforms included changing some laws; doing ethics workshops; training prosecutors on international cooperation; etc. etc. But what did we get in return for this huge financial investment? Well, the legislation became better; the public officials who already believed in ethics believe it even more; prosecutors are better trained. But did it break corruption? The answer is: a little, at best. Why? Because corrupt public officials are laughing when they hear about these reforms. They do not care much about law amendments; ethics workshops; or whether prosecutors are trained or not.

But: corruption could quickly die down if public officials reported each time they are offered a bribe. However, “despite the widespread existence of requirements for officials to report corruption, GRECO has rarely found that these have helped change the culture of silence that corruption can breed”.[1] So it may come as a surprise that on 14 August 2014, the Republic of Moldova broke this culture of silence. The number of public officials reporting bribe offers soared strikingly within days: 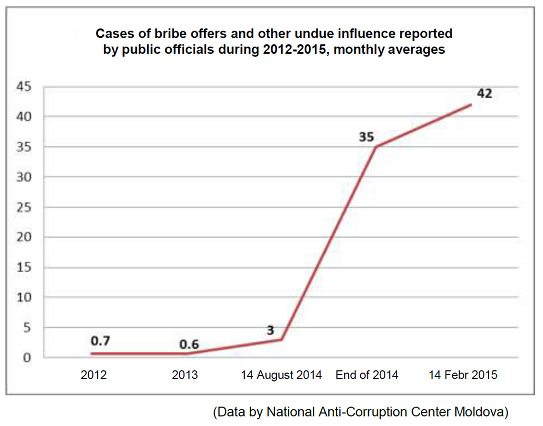 What had happened? The Moldovan National Anti-Corruption Center had installed a simple tool: Undercover testers, pretending to be ordinary citizens, went around the country and applied for public services. All public officials were warned in advance about this new tool. The National Anti-Corruption Center also conducted 472 trainings for public officials on how to properly respond to bribe offers.[2] The tests were only administrative as they could only lead to disciplinary consequences, but not to criminal trials. Nonetheless, the tests had the following immediate effect: Public officials became hesitant to ask for bribes, because any citizen in front of them was a potential integrity tester. Public officials started reporting bribe offers by citizens, because they suspected these offers to be integrity tests and they wanted to demonstrate good behaviour. Citizens stopped offering bribes, because public officials started reporting them. And for the first time in the history of Moldova, judges reported bribe offers, although these reports soon died down again when judges found out that the law on integrity tests did not apply to them. And one can only imagine how judges responded to bribe offers before integrity testing had started.

Integrity tests are nothing new. For a long time, international organisations including the OECD,[3] OSCE,[4] UNODC,[5] and the World Bank,[6] as well as NGOs, such as Transparency International,[7] have recommended integrity tests because of their extraordinary effectiveness. Integrity tests have been part of the success story of Georgia. Long-standing rule of law democracies such as Australia; the United Kingdom; and the United States apply it in their police forces.[8]

So, given the effectiveness of this tool, why do not many more countries apply it? The answer is simple: because itis so effective. Applied properly, integrity testing has the potential of drying out the stream of revenue from bribery. It is stepping on many feet. Integrity testing is also a political risk. Shortly after Moldova introduced the tests in August 2014, the government realised the strong effect it had. Parliamentary elections were due in November 2014, and the probability was high that the tests could expose members of the governing political parties, and that no campaign billboard would be able to undo the harm caused to their images.

Of course, there are also constitutional law questions regarding this tool. Do tests violate the privacy of public officials because testers secretly record them, even if this does not happen at home, but at their workplace? To what extent can testers tempt the public official to reveal his/her willingness to ask for a bribe? The European Court of Human Rights has implicitly approved of random integrity testing in one case against Romania, reaffirming existing limits on provocation regarding criminal cases.[9] One can only hope that the Court will soon have a chance to further underpin administrative integrity testing with legal certainty. In the meantime, those who profit from the corrupt status quo will continue to trample on the human rights of countless desperate citizens.

It is not corruption that is the cancer of mankind, but the lie that nothing can be done against it.

* Note: the article has undergone minor changes upon the author’s request on 6 July 2016.

Dr.Tilman Hoppe worked as a judge in civil and criminal matters. For six years, he reorganized a corrupt state-owned bank at the Ministry of Finance and at a private financial firm in Berlin. From 2007 to 2011, he worked for three inquiry committees of the German Parliament. Mr. Hoppe served as expert for the Council of Europe, the European Commission, the UNDP, the World Bank, and other international organisations. He is author of about 60 law review articles and book chapters, and has been teaching law at the Berlin School of Law and Economics.

[2] See for a complete overview: National Anti-Corruption Center, Report on the implementation of Law no.325/23.12.2013 as of 14 February 2015 and on activities to test professional integrity carried out from 14 August 2014 to 30 January 2015, 92 pages, cna.md/sites/default/files/prevenirea_coruptiei/report_en.doc.

[8] Council of Europe, Opinion on the Draft Law “On Professional Integrity Testing” of the Republic of Moldova, 2013, http://www.coe.md/images/stories/Articles/Expertises_and_reports/2013.01_eccu-bo-2_2012-moldova-th.pdf.

Winner of the Round 6, Voice of the Region Competition