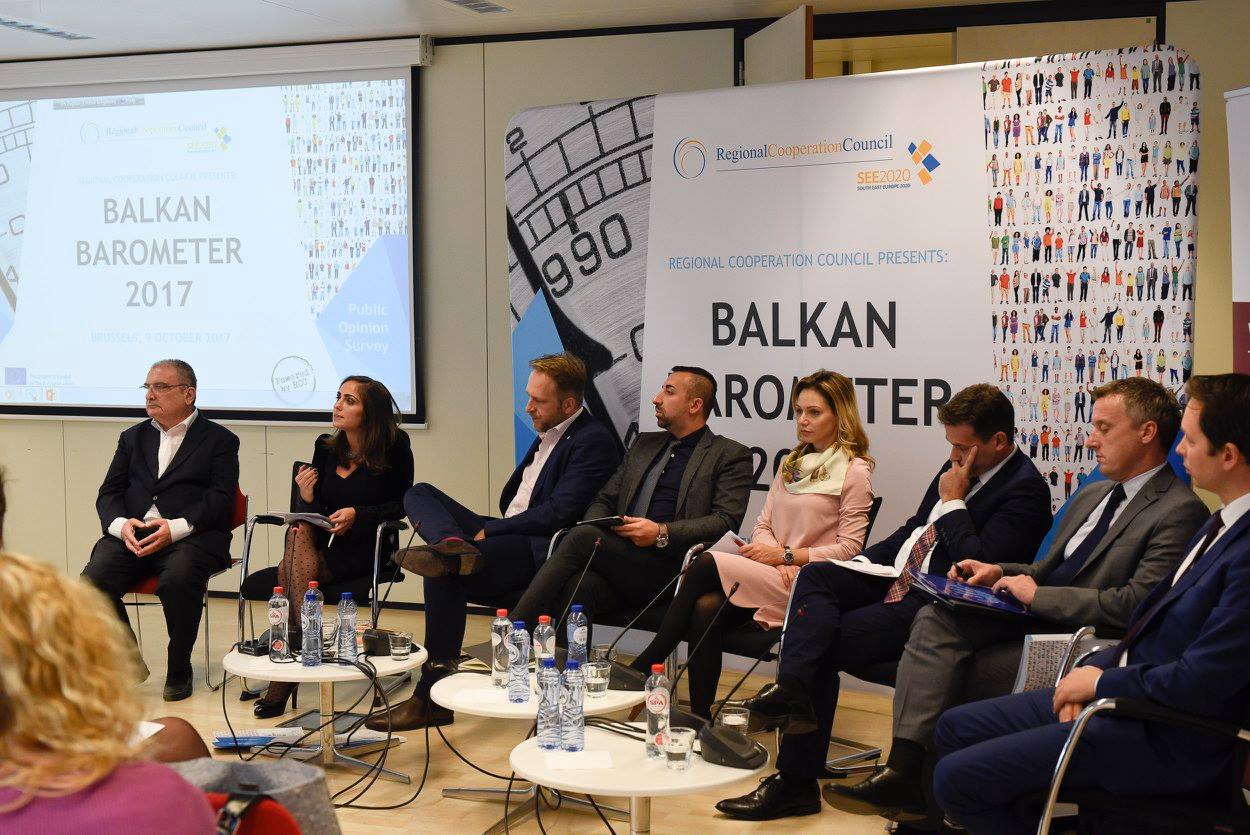 Brussels – The Regional Cooperation Council’s (RCC) presented in Brussels today the 2017 edition of the Balkan Barometer (BB), an annual survey of citizens and business communities’ opinion on the situation in the region.

“While there is further evidence of economic recovery across a number of the region’s larger economies, unemployment remains the chief concern. Worryingly, the Barometer highlights ever growing anxiety over corruption; in BB 2015, 15% rated corruption as one of the key problems for the region. The number was up to 27% in 2016 and is now at 32%,” said RCC Secretary General, Goran Svilanovic.

“An upturn in economic performance by the region’s economies has brought about an increasingly optimistic outlook for the future that needs to be solidified through decisive government action.  While it’s hardly news that the region has much work to do, our hope is that the Barometer’s findings will help set the agenda that will ultimately spur further growth in the region, especially having in mind the implementation of the RCC-prepared Regional Economic Area Multiannual Action Plan which region’s leaders endorsed in Trieste this summer” added Svilanovic.

Despite notional support for European integration there continues to be widespread scepticism about the region’s short to medium term accession prospects, with 28% of respondents saying they believe EU membership will never happen, the Barometer shows.

“It is always good to touch-base with the mind of citizens and business community in the region. Now we see that positive developments provided environment for optimism. The Trieste Summit was another booster as it enabled the joint work of the EU and the region and it resulted in the Regional Economic Area, Transport Treaty etc.”

Presenting the key findings of attitudes, experiences, aspirations, perceptions and expectations across the Western Balkan economies, Vladimir Gligorov, GfK Expert Consultant and Researcher at the Vienna Institute for International Economic Studies, stressed that business people continue to struggle with what they see as complex taxation and an unfriendly business environment with an unpredictable legal system.

“62% of business people in the region perceive very hard or hard to start a private business in their place of living. More than half of them (51%) believe that upgrading roads would have the most positive effect on their business. While 56% of respondents agree that the government takes note of their needs, but only to a limited extent, it is positive to record the decline in the number of respondents who feel ignored by the authorities (down to 30% from 38% in 2015),” said Gligorov.

Usein focused on the Balkan Barometer data relevant for the Roma in the enlargement region. "Based on the findings of the BB Business Opinion, some 16% of SEE business leaders would not hire a Roma person regardless of the job qualifications while another 19% are unsure either way. There does not appear to be an aversion towards employing foreigners, while, regrettably, there is overt discrimination towards hiring Roma and women... Almost 55 per cent of the employers think that employing Roma would have negative influence on selling goods and services and on the working atmosphere in the company. Such views and attitudes among the employers need to be challenged.", Usein said. He added that the Roma Integration 2020 project that promotes regional standards in formulating, budgeting and monitoring Roma integration policies across the region, and gradually builds the institutional capacities of the economies to properly apply those standards and implement particular programmes to integrate Roma in education, employment, health, housing and civil registration, has the potential to contribute to the integration of Roma and thus positively influence the general economic development efforts.

Balkan Barometer (BB) is an annual opinion survey commissioned by the RCC and conducted by GfK, collecting and analysing data from region's citizens and businesses across a variety of thematic areas such as employment, trade, investments, corruption, etc. Its 3rd edition included 8000 citizens and 1600 companies.