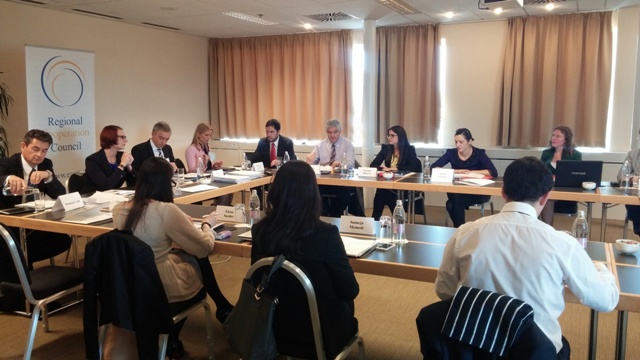 Regional Action Plan for South East Europe (SEE) in the area of justice has been unanimously approved at the first meeting of the Working Group on Justice, held under the guidance of the RCC Secretariat, in Ljubljana, Slovenia, 23 May 2014 (Photo: RCC/Vanja Vekic)

Regional Action Plan for South East Europe (SEE) in the area of justice has been unanimously approved by all members at the first meeting of the Working Group on Justice, held under the guidance of the Regional Cooperation Council (RCC) Secretariat, in Ljubljana, Slovenia, today.

The Plan refers to the following three areas: efficiency of courts, quality of justice and competence of judges and prosecutors; cross-border judicial cooperation in business related legal and judicial areas; and alternative dispute resolution.

Suzana Ivanovic, RCC Secretariat’s Senior Expert and Head of Justice and Home Affairs Unit, said that the Plan foresees comparative overview of best practices for court backlogs reduction program and for quality measuring system for the judiciary, which could be later followed-up with more concrete actions if needed. Regional Action Pan also envisages the establishment of Regional Judicial and Prosecutorial Training Network (RJPTN) and of regional cooperation through network of judicial and prosecutorial councils, and also increasing competences of presidents of courts and court administrators.

“Justice in an important area with the RCC’s SEE 2020 Strategy, as a part of the Good Governance pillar, that focuses its activities on achieving a significant improvement in the functioning of the judicial system in SEE, as an independent, efficient and accountable judiciary is a sine qua non precondition for the rule of law, democracy and human rights development,“ said Ivanović.

This Regional Action Plan covers the period until 2016, and also includes introduction of e-procedure in bankruptcy matters, make comparative overview on legislative approaches on mediation in bankruptcy proceedings and developing a network of bankruptcy trustees’ chambers or bankruptcy agencies.

The alternative dispute resolution dimension foresees the implementation of the pilot court-annexed mediation model as well as organisation of training courses for judges.

The Plan is to be implemented by six SEE 2020 Strategy participating countries. Its activities are closely linked to the criteria in the European Union (EU) Enlargement Chapter 23 – Judiciary and fundamental rights – and present a supplement to the endeavours aimed at meeting that criteria.

The meeting was organized by the RCC Secretariat and it gathered members of the working Group on Justice for South East Europe, European Center for Dispute Resolutions (ECDR) consultants and RCC Secretariat.

Justice and Home affairsRule of Law and Good Governance