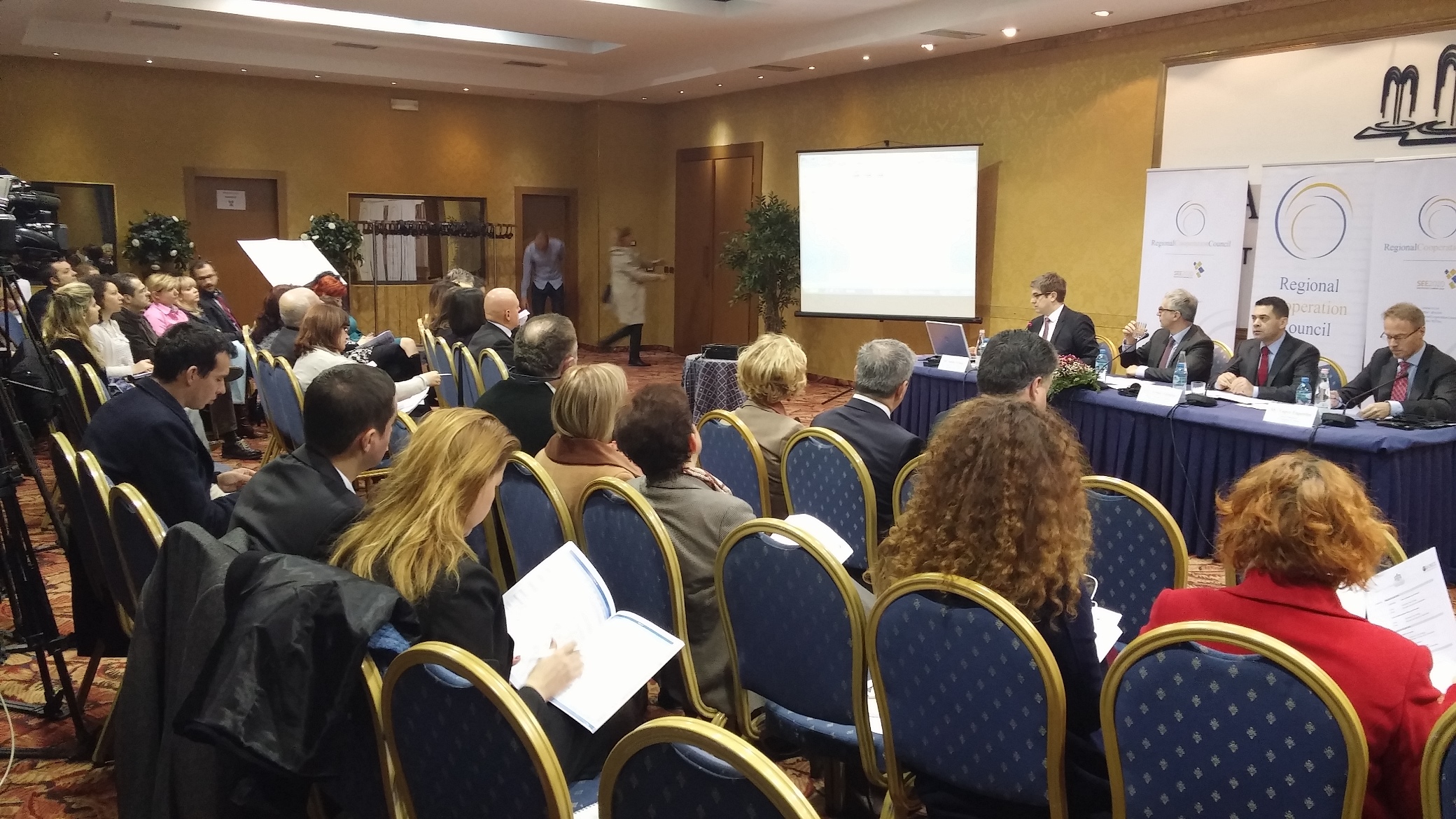 Conference dedicated to the monitoring and implementation of RCC’s SEE 2020 strategy, held in Tirana, Albania, on 9 February 2015. (Photo RCC/Selma Ahatovic-Lihic)

“It’s a great pleasure to be with you here in Tirana to discuss the South East Europe (SEE) 2020 strategy and the main developments in the past year” said Goran Svilanovic, Secretary General of the Regional Cooperation Council (RCC), at the conference dedicated to the monitoring and implementation of RCC’s development strategy for SEE.

Svilanovic said that Albania was one of the countries that prepared and adopted a detailed National Action Plan for SEE 2020, adding that the SEE 2020 process directly supports the accession efforts of the enlargement countries.

Presenting the initial results of the Balkan Barometer(1) research Svilanovic said they are stark and sobering and a clear message to all of us that a lot more needs to be done. “It is evident that the people’s expectations are more optimistic than their assessment of the current state of affairs, but for the absolute majority of people in the region, the number one problem is unemployment followed closely by the economic situation. What’s striking here is that there are really almost no differences between the economies in terms of citizen perception on unemployment and economic problems.”

Arben Ahmetaj, the Albanian Minister of Economic Development, Trade and Entrepreneurship, said that the SEE2020 is in full harmony with his country’s plan for economic reforms. He spoke of energy theft in Albania, emphasizing it is a huge problem and saying that Albanian is losing some 150 million US dollars every year because of it. On the other hand he mentioned a recent great success – Albania has moved up 40 places in the recent World Bank’s “Doing Business Report”. Minister Ahmetaj concluded that Foreign Direct Investments are necessary in order to improve the Albanian economy.

Yngve Engström, Head of Operations at the EU Delegation to Albania said they are pleased that the Albanian Government is so committed to the implementation of the SEE 2020 strategy. He emphasized that there are three ways of getting EU support: regional programmes, such as EDIF then national and finally the EU programmes. He added that the EC has linked national development plans and national reform programmes with the RCC’s SEE2020 strategy.

The event,organised by the RCC Secretariat in cooperation with the Ministry of Economic Development, Trade and Entrepreneurship of Albania, and the Organisation for Economic Co-operation and Development, gathered more than 50 representatives of Albanian administration, international organisations, the business community, academia and civil society organisations.

(1) Balkan Barometer is a comprehensive public opinion and business sentiment survey, commissioned by the RCC towards the end of 2014, asking more than 14,000 citizens and 1,400 companies in 7 Western Balkans economies to share their views on main political, social and economic developments.