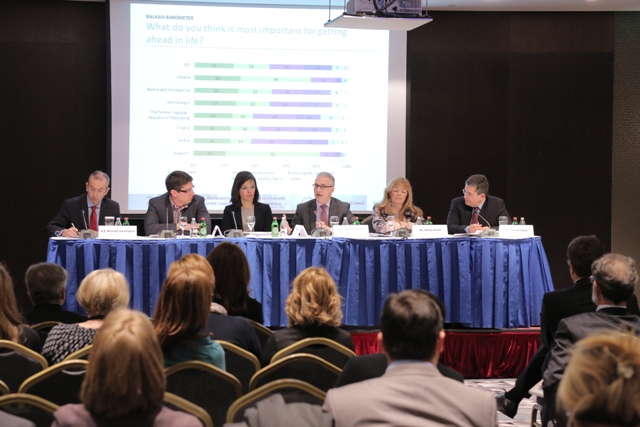 Panelists at the meeting devoted to stocktaking and evaluation of the RCC’s SEE 2020 development Strategy implementation, Belgrade, 23 March 2015 (Photo RCC/Miros)

“We have gathered here to assess what has been done in the implementation of Regional Cooperation Council’ (RCC) SEE 2020 Strategy, adopted by all the regional governments in November 2013”, said RCC Secretary General, Goran Svilanovic. He stressed that the preliminary results of RCC’s Balkan Barometer[1] survey show that the people’s sentiment about the current economic situation is more pessimistic than their opinion of the future.

Unemployment and making ends meet are seen as the main problems throughout the entire region. “We will focus all our efforts to be useful to the regional Governments which are implementers of the SEE 2020 Strategy”, said Svilanovic.

He announced the presentation of the full Balkan Barometer report in Brussels on the 6th of May. The EU Commissioner for European Neighbourhood Policy and Enlargement Negotiations, Johannes Hahn, as well as regional ministers will also take part in a whole day event dedicated to regional cooperation.

Head of the EU Delegation to Serbia, Michael Davenport, said that regional cooperation is the absolute key for economic development, especially in South East Europe. He added that the EU is keen to support all countries in the region in pursuing reforms that make sense, i.e. those that reflect the real needs of each individual country.

Director of the Public Policy Office of Serbia, Jasna Atanasijevic, gave an overview of Serbia’s activities in implementing the SEE 2020 Strategy and the harmonisation of the country’s national and regional plans.

Advisor to the Minister responsible for European Integration of Serbia, Vladimir Ateljevic, said that the SEE2020 Strategy focuses on regional cooperation, especially the ratio between regional initiatives and actual projects. He added that the RCC has a crucial role in streamlining projects at the regional level so they can be most beneficial for everyone in the Western Balkans.

Economics Professor at the University of Perugia, Milica Uvalic, wrapped-up the discussion with a broader overview of the economic situation and problems in the region. She said that the Western Balkans is facing a deep economic crisis for the sixth year in a row and with perspectives that are not promising. Uvalic noted that the countries of the region are much more de-industrialized than the EU Member States, and recommended an urgent re-industrialisation of the region.

The meeting, which is part of a series of similar events throughout the region, was organised by the RCC Secretariat in cooperation with the Office of the Deputy Prime Minister of Serbia, Kori Udovicki. It gathered representatives of the Serbian administration, EU, international organisations, business community, academia and civil society organisations.

[1]  Balkan Barometer is a comprehensive public opinion and business sentiment survey, commissioned by the RCC towards the end of 2014, asking more than 14,000 citizens and 1,400 companies in 7 Western Balkans economies to share their views on the main political, social and economic developments.