RCC’ Balkan Barometer survey: Albanians among the most optimistic about their expectations from the European integration 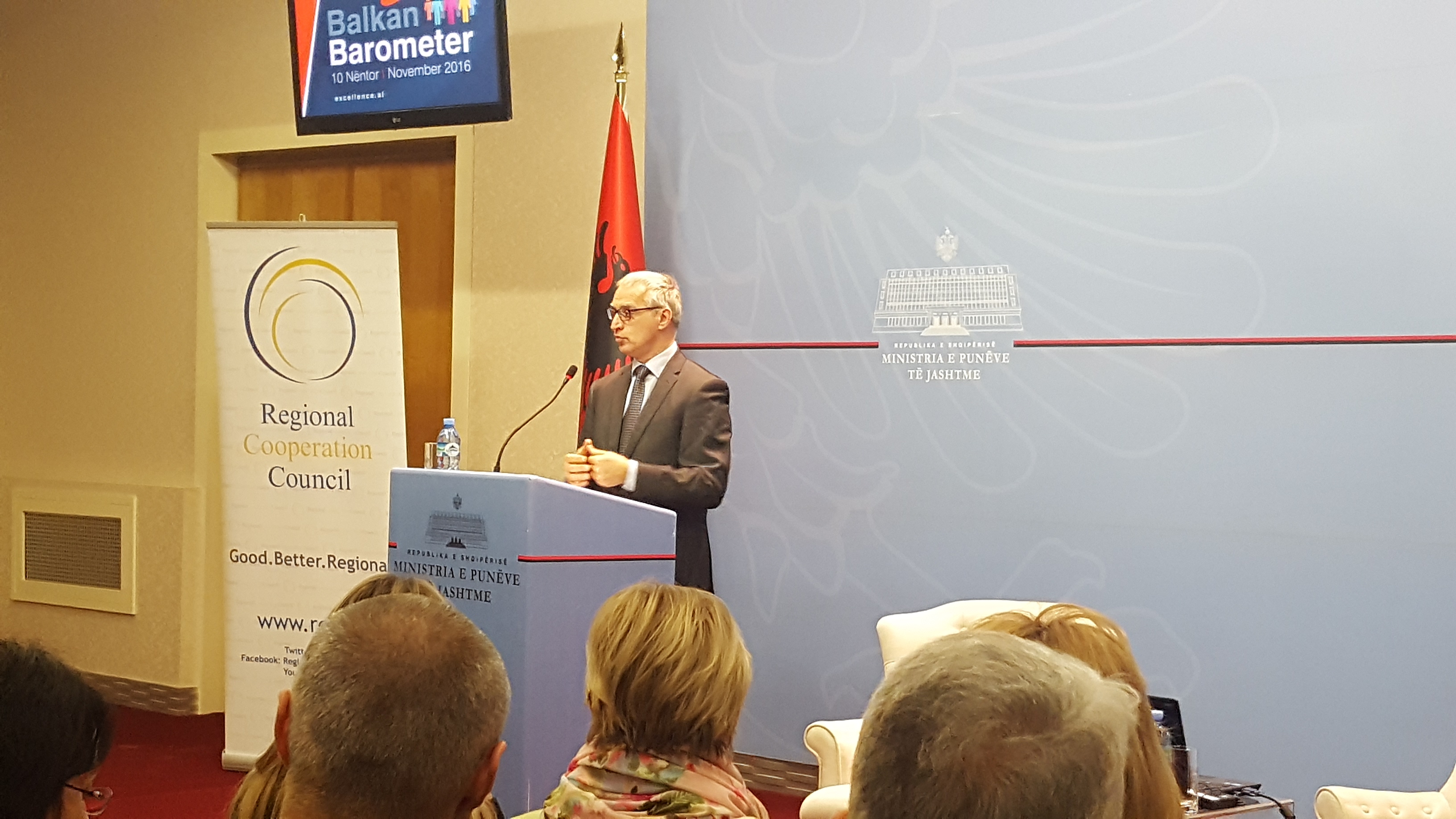 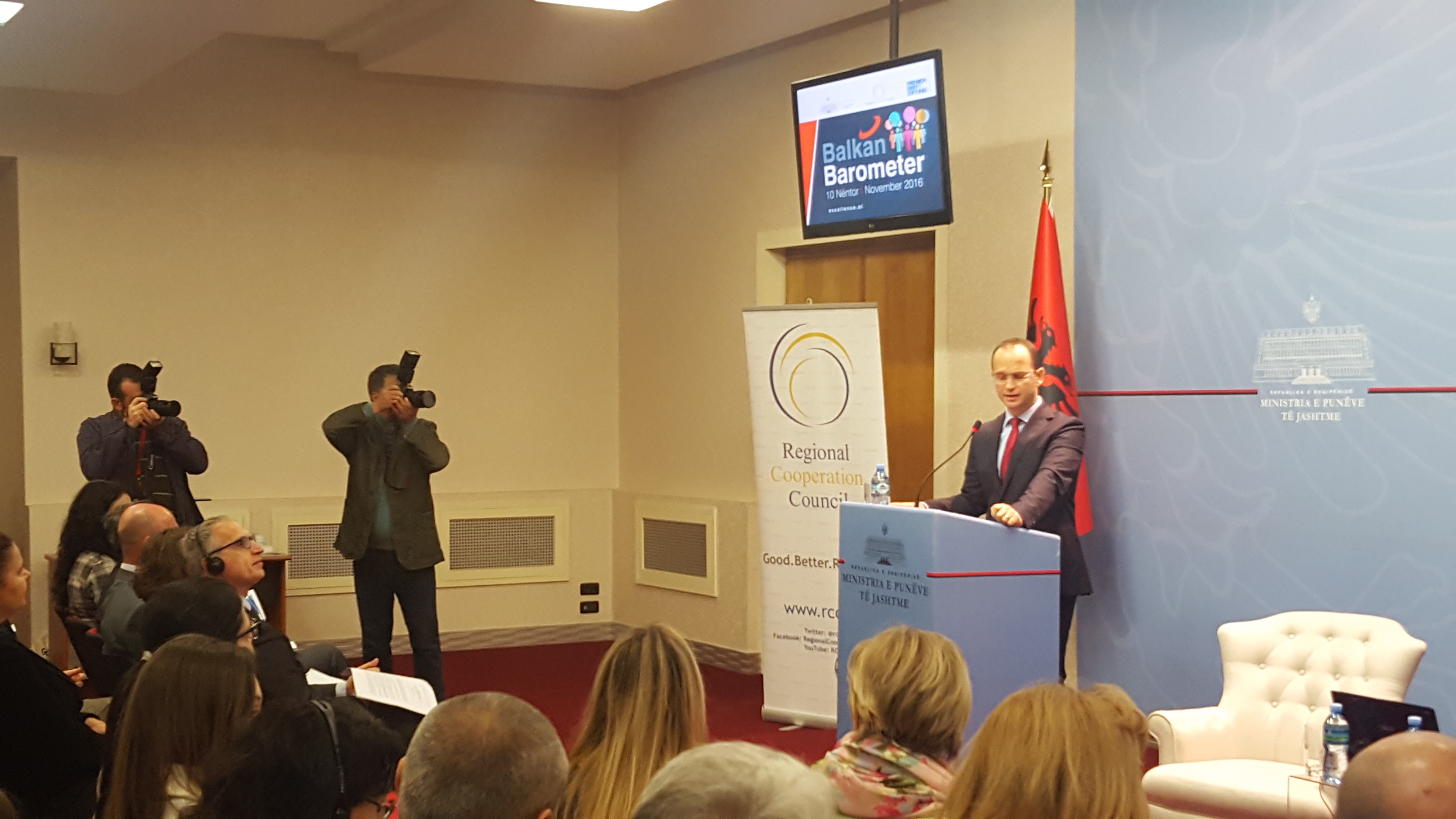 Sarajevo/Tirana - The Albanians are among the most optimistic/hopeful people in the region about their expectations from the European integration process and the benefits deriving from EU membership - 81% of the Albanian respondents believe that EU membership is a good thing, against the South East Europe (SEE) average of 39%, was heard at the presentation of the Regional Cooperation Council (RCC)’s Balkan Barometer 2016 survey, at the Ministry of Foreign Affairs of Albania, in Tirana today.
“The European Commission just recently recommended to open accession talks with the European Union, therefore I am very satisfied Albanians ranked as the main supporters of the EU integration process,” said Minister of Foreign Affairs of Albania, Ditmir Bushati, while opening the event. He commended the RCC for the activities undertaken in defining the region’s path towards the EU.
“Corruption is the one issue that has grown in importance for SEE; at the regional level 27% mention corruption as one of the top problems, up from 15% in 2014. Respondents’ answers indicate that they are willing and ready to act to stop corruption, but the majority of them believe that their government is ineffective at fighting corruption,” said the RCC Secretary General, Goran Svilanovic, at today’s presentation.
He added that even though the Balkan Barometer 2016 results show “that the SEE economies started to recover, the messages from it are very clear: the region has still a lot of work to do addressing the many important issues to keep the economies growing.”
The presentation was organized by the Center of excellence of the Minister of Foreign Affairs of Albania, RCC and Fridrich Ebert Stiftung Foundation. The RCC Deputy Secretary General, Gazmend Turdiu gave an in depth overview of the Balkan Barometer survey.
Balkan Barometer 2016 edition as a comprehensive survey commissioned by the RCC on attitudes, experiences and perception of the general and business community in South East Europe on various economic, social, political and cultural issues covered by the RCC’s SEE 20202 Strategy. It is conducted among 8000 citizens and 1800 companies throughout our part of Europe, it is an easy-to-access source of information. The RCC website www.rcc.int permits download of both components of the Balkan Barometer - the Public Opinion Survey and Business Opinion Survey - as well as their datasets which are easily searchable. It is available at: http://www.rcc.int/seeds/results/2/balkan-opinion-barometer and http://www.rcc.int/seeds/results/3/balkan-business-barometer
The Balkan Barometer 2016 findings were presented to the high level representatives of Albanian government and diplomatic core, think tanks, civil society organizations as well as representatives of academia and students. The event precedes the RCC-organized Regional Coordination Conference on Counter-Terrorism and Violent Extremism in South East Europe, and Workshop with national authorities on SEE 2020 Programming Document 2017 -2019, that are to take place in Tirana tomorrow.
SEE 2020