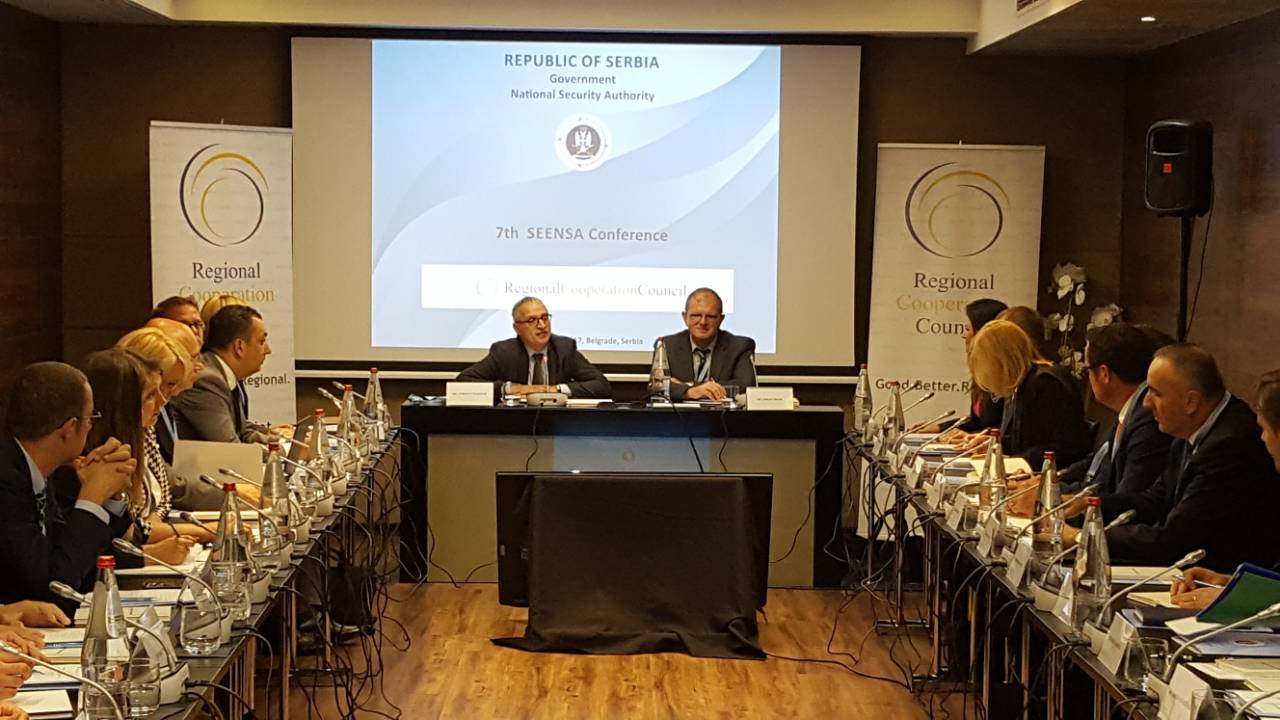 Focus of 2017 SEENSA meeting was on the role of National Security Authorities (NSA) in their respective national cyber security strategies, work of technical working group on Industrial policy and regulatory framework of Critical Infrastructure Protection (CIP).
While opening the meeting, the RCC Secretary General Goran Svilanovic reminded that organized crime and international terrorism were becoming more and more organized and internationalized, which required enhanced and strengthened regional cooperation and coordination, as it is vital for the protection of national security of each and every of  participants.
“Specifically, orderly and protected exchange of personal data aimed at speeding up and facilitation of vetting procedures and issuance of security certificates, as well as education and training are some of the areas in which we can enhance regional cooperation to the benefit of all involved” said Svilanovic adding industrial security as yet another field where SENSA could be helpful in defining and better protecting individual national critical infrastructure, both cybernetic and physical.
Director of Serbian NSA and host of the event, Goran Matić, briefed the participants on current structure of cyber and information security in Serbia, as did other regional NSAs, as well as the representative of the EU Council’s Secretariat General, on their organization’s activities and challenges, with Bulgaria and Croatia putting it in the perspective of their future EU presidencies (Bulgaria – 2018, Croatia – 2020).
The meeting participants also discussed developments in security arena in the region, exchanged information, views and good practices. The meeting concluded with agreement on continuation of regional cooperation as well as to details on the time and place for the SEENSA annual gathering in 2018. It has been concluded that Slovenia will be the host of the next SEENSA meetings, both the Expert working group and the main conference, at the directors’ level.
The SEENSA meeting is to be followed by the „6S“ gathering the next day - initiative of National  Security Authorities (NSAs) from South East Europe with more limited participation at directors' level, also supported by the RCC.
The 7th SEENSA meeting was co-organized and co-chaired by the Regional Cooperation Council (RCC) and the NSA of Serbia.
SEENSA, specialised regional security cooperation format for national security authorities, focused on enhanced cooperation of national security authorities in South East Europe, meets regularly each year from 2011, when they first met in Sofia, Bulgaria under the auspices of the RCC.
Security Cooperation