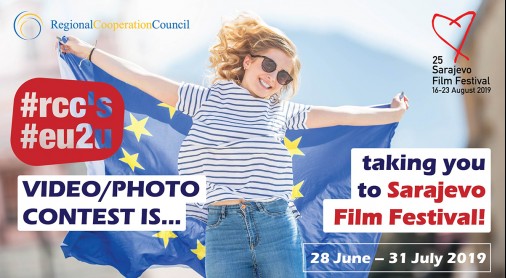 EUrope in my eyes!

After successful photo and video contest where citizens of the South East Europe gave us a glimpse of what this region has to offer, the RCC is now organizing a video/photo contest to check how you feel about our old continent and the Union of many European nations.

This time around, we want to spark your creativity and imagination, to SEE what you like in the EU and how do you SEE it ?

Is it freedom of choice? Culture? Art? Richness in diversity? Opportunities to work, travel or study abroad? Freedom to love who you chose? No roaming charges within the EU? Security? What do we have in common? Major differences? Or something completely different? Show us in video or a photo - NOW is the time!!!

This contest is organized within the RCC’s support to the 2019 edition of Sarajevo Film Festival (SFF). It aims to encourage video/photo creativity of young people to express their desires and aspirations, at the same time promoting the European Union in the region as well as the region in the EU.

The videos featuring individual stories on “EUrope in my eyes” (or “How I SEE EUrope”) need to be up to 60 seconds long. They may include real-life footage, animation or any other creative combination. The photos should clearly show what about the EUrope you like/or the reason why you like it /or how do you see it.

The RCC will take two winners to the biggest and most important film festival in the region – famous 2019 Sarajevo Film Festival (SFF)! Winners will be RCC’s guests for the two final nights of the SFF, enjoying the movies and rich day and night life in the Bosnia and Herzegovina’s capital. The RCC is to cover all costs for the winners’ visit to Sarajevo and SFF!

Selection of the winners:

The Selection of the winners will be straight forward. Once the contestants post their video(s)/photo the RCC will repost/share those on its Facebook or Instagram accounts and open them for voting.

A post that receives the most likes will be the automatic winner. The RCC reserves the right to choose its own top pick and that will be the second winner.

Please note that if the same entry is posted on both Facebook and Instagram, the results would not be added up but the entry that collected more likes on either one would be considered for the final count.

The winners will be announced before the official opening of the Sarajevo Film Festival, the latest, on its website, Instagram, Facebook and Twitter profiles and notified directly, using the e-mail addresses provided at the registration.

NOTE: The RCC reserves the right not to promote contest entries featuring inappropriate or offensive content.