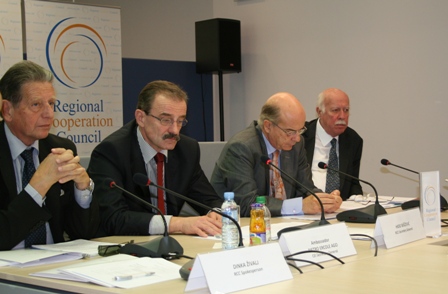 SARAJEVO – The Secretariat of the Regional Cooperation Council (RCC) will host a coordination meeting of the Adriatic-Ionian Initiative (AII), the Permanent International Secretariat of the Organisation of the Black Sea Economic Cooperation (BSEC PERMIS) and the Central European Initiative (CEI), at its premises in Sarajevo, on Monday, 13 October.

This regional meeting will examine the ways of harmonising activities of the RCC Secretariat with those of AII, BSEC PERMIS and CEI by means of exchanging best practices, elaborating joint projects and participating in events on different levels.

Journalists are invited to attend the opening of the meeting on Monday, 13 October 2008, at 9.30 a.m., at the premises of the RCC Secretariat in Sarajevo, Trg BiH 1/V, 71000 Sarajevo, Bosnia and Herzegovina.