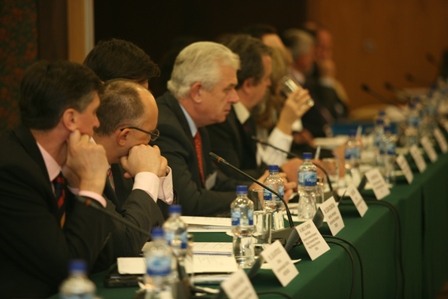 Under the auspices of the Regional Cooperation Council (RCC) and the Regional Environmental Centre for Central and Eastern Europe (REC), the environmental ministers and high officials of Albania, Bosnia and Herzegovina, The Former Yugoslav Republic of Macedonia, Montenegro and Serbia defined the Action Plan activities aimed at reducing risks of floods, adapting to excessive temperature rise, droughts, health risk and other consequences of climate change.

“This comprehensive process creates a unique opportunity to integrate environmental and health concerns into economic and infrastructure projects, thus implementing the concept of sustainable development”, said RCC Secretary General Hido Biscevic, while opening the conference. “The RCC offers the much needed regional framework for these efforts.”

The ministers stressed that addressing the climate change requires urgency, as SEE is already vulnerable to climate variability. Adverse impacts include increased flood and drought magnitude and damages, reductions in crop yields, decreased water availability, and increased number of people exposed to vector and water-borne diseases. The conference participants underlined that adaptation could significantly reduce these effects.

The ministers invited the donor countries and the European Union to financially support implementation of the Framework Action Plan during 2009-2011. They empowered Serbia to present the Plan to the UN Climate Change Conference – the 14th session of the Conference of the Parties, which will be held in Poznań, Poland, in December 2008.

Representatives of the European Commission, donor countries, international organizations, institutions and non-governmental organizations also participated in the conference. The development of the Framework Action Plan was financially supported by the Royal Norwegian Ministry of Foreign Affairs.