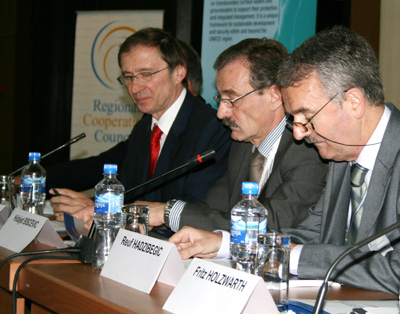 SARAJEVO – A three-day International Workshop on Integrated Transboundary Water Resources Management in South Eastern Europe (SEE) concluded in Sarajevo today that cooperation on shared water resources management is a crucial component of stability and prosperity in SEE. The event was co-organized by the Regional Cooperation Council (RCC) Secretariat and the United Nations Economic Commission for Europe (UNECE), with the strong support of the Global Water Partnership Mediterranean and the International Sava River Basin Commission.

Opening the workshop, the RCC Secretary General, Hido Biscevic, said that “promotion of cooperation on ecologically sound management of transboundary waters and their reasonable and equitable use is the way to avoid conflicts and promote development”.

“As the SEE region is probably the most vulnerable part of Europe in terms of climate change, and the increased frequency and severity of droughts, floods and other extreme weather conditions, the RCC supports intensified regional cooperation on these issues. At the same time, involvement of the EU, relevant UN agencies, the World Bank, non-governmental organizations, as well as donor community, is crucial for filling gaps and supporting regional initiatives, investments and projects.”

Several project ideas were presented at the workshop and discussed with a variety of stakeholders from SEE, with a major focus on the development of the Water and Climate Adaptation Plan for SEE, which is to be elaborated by the World Bank.

The conference participants drafted an accurate picture of all transboundary waters in SEE, highlighting achievements and identifying the most urgent actions to prevent, control and reduce negative transboundary impacts on human health, safety, nature and socio-economic conditions. The aim is to prepare for the second Assessment of transboundary waters under the UNECE Water Convention, which is to take place in November 2009 in Geneva, and for the next Ministerial Conference “Environment for Europe”, to be held in Astana, Kazakhstan in 2011.

Senior Adviser to the UNECE Executive Secretary, Patrice Robineau, recalled the importance of the UNECE Convention on the Protection and Use of Transboundary Watercourses and International Lakes to foster stable and sustainable cooperation.