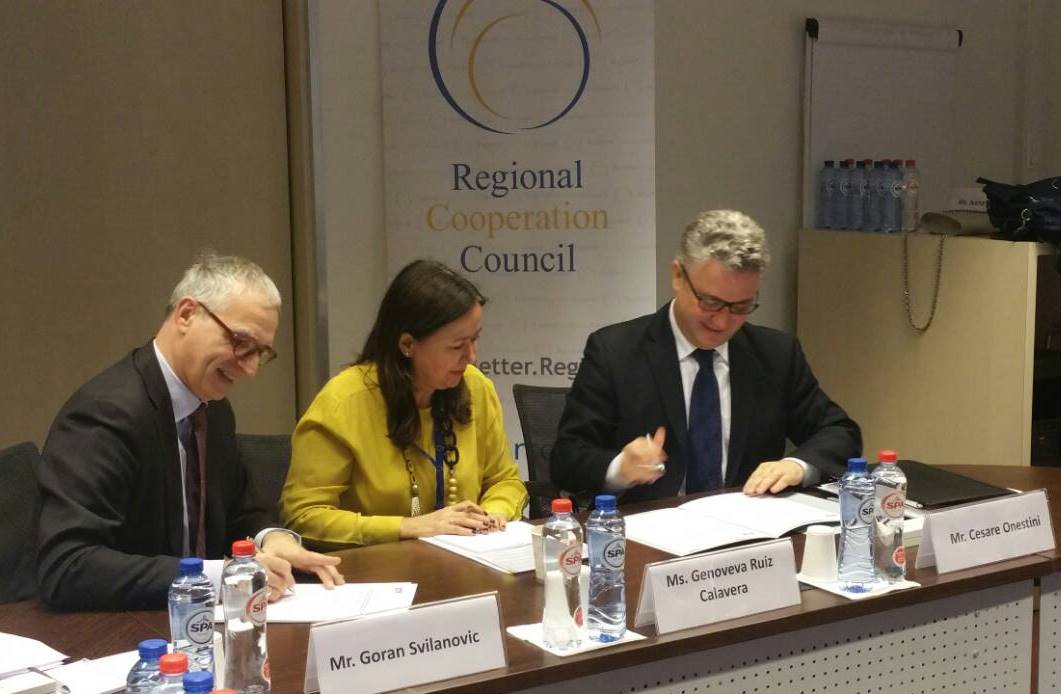 The Regional Cooperation Council’s (RCC) Secretary General Goran Svilanovic (to the left) and newly appointed Director of the European Training Foundation (ETF) Cesare Onestini (to the right) signed an agreement on continuation of cooperation between the two organisations, in Brussels on 22 November 2017 (Photo: RCC/Ivana Petricevic)

Svilanovic expressed satisfaction with earlier cooperation between the two organizations in the areas of skills and vocational education and training (VET), and employment agenda, emphasizing that there was room for improvement and deepening the synergy, especially in the light of the RCC-developed Multi-annual Action Plan (MAP) on a Regional Economic Area (REA) in the Western Balkans, endorsed at this year’s Western Balkans Summit in Trieste.

“Development of a globally competitive skills base and research systems, which foster innovation are key factor for economic recovery and sustained growth in the Western Balkans. The region needs to develop measures to provide better quality education, strengthening the link with the needs of the private sector, and ensuring development of highly skilled labour force throughout the education systems”, said Svilanovic adding that only the digital skills development is an explicit measure in MAP, with clear emphasis on the development of research skills in particular of young researchers in the region.

ETF’s Cesare Onestini reiterated that the EU enlargement process and related policies explicitly and/or implicitly refer to the importance of skills and vocational education and training for economic development, stressing that the region’s efforts on this agenda should be supported by making skills more prominent in the implementation of the investment and trade agenda, including recognition of VET qualifications in the mobility agenda, and enhancing  the digital skills agenda through ETF products and services.

The cooperation agreement for period 2018-2020 envisages widening of the cooperation to include monitoring and data collection of education indicators, quality of education, RCC’s Employments and Social Affairs Platform (ESAP), and support to MAP agenda in Recognition of qualifications and skills development in the region.

The European Training Foundation is a European Union agency that helps transition and developing countries harness the potential of their human capital through the reform of education, training and labour market systems, and in the context of the EU's external relations policy. Based in Turin, Italy, the ETF has been operational since 1994.