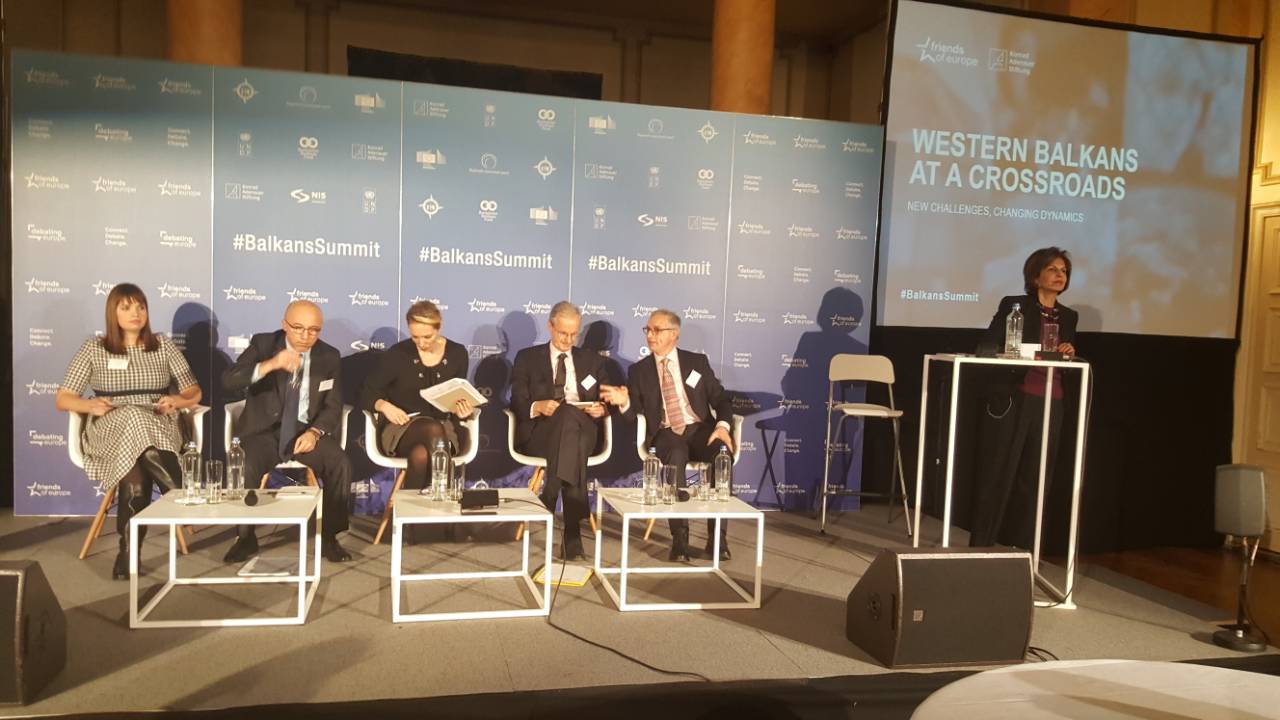 Svilanovic: The region has the action plan and has to remain committed to its implementation

Brussels – The 18th edition of policy summit on the Western Balkans under the title: Western Balkans at a Crossroads: New Challenges, Changing Dynamics, organised by the leading Brussels-based think-tank Friends of Europe (FoE), with the support of the European Commission, Regional Cooperation Council (RCC), Konrad Adenauer Stiftung, United Nations Development Programme (UNDP) and Rockefeller Brothers Fund, took place in Brussels today.
The event tackled topics of peace, democracy and reconciliation in the region as a precondition for economic and social stability but also business outlook and necessary reforms.
Albanian Prime Minister, Edi Rama, opened the event saying that the EU is important driving force for the Balkans as without it the region would not be able to have reforms it is having and that all that is happening is because the Balkans wants to be part of the EU family. “If this hope fades away things could turn wrong. That is why our question is not what will happen among ourselves, but what will happen between us and the EU,” concluded Rama.
The RCC-prepared Multi-annual Action Plan for a Regional Economic Area in the Western Balkans Six (MAP), endorsed by the leaders of Western Balkans Six (WB6) at the Berlin-process summit held on 12 July 2017 in Trieste, was in focus of the discussion, and cited as a step forward towards the region’s common goal, the EU membership.
“We have a plan for the progress of the region and now just have to implement it”, said Secretary General of the Regional Cooperation Council, Goran Svilanovic, speaking at the panel ‘Business Outlook Perks up but Reforms must Continue’.
“The Multi-Annual Action Plan (MAP) for the Regional Economic Area in the Western Balkans Six is a clear roadmap that envisages improvements in trade, on top of what has been done so far to include trade in services and removal of non-tariff barriers but also finding ways to attract investments, making the region competitive. The MAP also includes enabling mobility of professionals, researchers, innovators, students, etc., by removing the existing barriers and finally, but of key importance – digitalisation and digital integration of the region.”
According to the RCC’s SEE2020 Strategy 2017 Annual Report on Implementation the return of employment growth is a success story. The Western Balkans economies have managed to add almost 400,000 jobs on the labour market in the previous five years. Although performance differed from one economy to another, the obvious upward trend is expected to continue into the next year. Still, despite these encouraging results, RCC Balkan Barometer 2017 shows that unemployment remains region’s citizens chief concern, as 67% of them say so.
Christian Danielsson, European Commission Director-General for European Neighbourhood Policy and Enlargement Negotiations, said there is a big commitment among the Western Balkans leaders to move towards the reforms on the EU accession path. “It would be painful for some economies, but would bring desired results. We have seen the change in direction of economic models in the region that are encouraging. The potential of the region lies in regional cooperation. Closely with the RCC, we are working now on Regional Economic Area, as we see it as a powerful engine for growth and job creation in the region that will deliver benefits for people. It is not an alternative to EU enlargement, but a warm-up exercise.”
Read and see more about MAP at RCC website http://www.rcc.int/priority_areas/39/map-rea.
The event gathered more than 200 people, with some of the Balkans’ top politicians and decision-makers in attendance, debating the future of the Western Balkans, with a focus on region’s ‘burning’ problem of unemployment and many pending reforms on its EU accession journey.
More on the event is available at http://www.friendsofeurope.org/event/western-balkans-crossroads?tab=programme