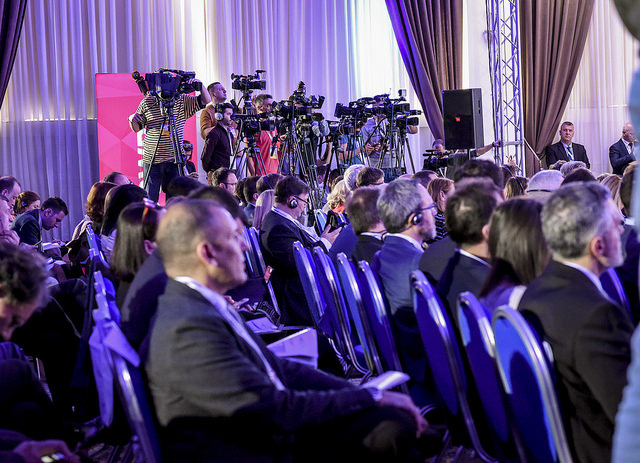 Skopje – The first ever, two-day Western Balkans Digital Summit finished in Skopje today. It brought together close to 800 participants, 50 companies and more than 50 speakers, including Prime Ministers and Ministers responsible for digital agenda from the Western Balkans (WB), EU Berlin Process participants, representatives of European Commission (EC), Regional Cooperation Council (RCC), IT industries and businesses, academia, and youth.
Speaking at the closing press conference, the host Minister of Foreign Affairs, Nikola Dimitrov, thanked the RCC, EC, German Government and Western Balkan partners, for assistance in organisation of the Digital Summit in Skopje, expressing his satisfaction over the fact that Skopje got to be the first to host this very important event for the region. Minister of Information Society and Administration, Damjan Manchevski, added that Skopje summit shall be the example of future annual digital summits in the region. He said that many agreements on the digitalisation of the region have been made during the past two days, especially in the area of lowering roaming charges in the region, something the RCC is supporting as well. “Where there is a political will, anything is possible, and this summit proves it,” concluded Manchevski.
The Digital Summit is one of the Digital Integration components of the RCC-developed Multi-Annual Action Plan on a Regional Economic Area (MAP REA) for the WB6. It is envisaged as an annual event that is to combine existing efforts and develop recommendations for the future cooperation among the region's economies, focusing on the essential topics of building a digital future: digital connectivity, trust and security, digital skills and competences and digitization of society and economy.
RCC Secretary General described the summit as a historic and pioneering event. “It is for the first time that the leaders of the WB economies - the Prime Ministers and Ministers- gather in this format to discuss and share political reflections on the digital transformation of this region and future digitization prospects of WB.”
“Despite tremendous efforts, energy and knowledge we are investing in the process of digitalization of WB, knowing that much more needs to be done; we still have big broadband connectivity gaps - estimates ranging from 1.5-5 billion euros; fragmented regulatory and investment frameworks impeding new investments; still high roaming costs; vulnerable cyberspace; yet not fully developed e-government and online services, etc.”
Svilanovic concluded that embracing digital transformation, ensuring greater availability of digital infrastructure, and enabling better regulatory framework and level playing field can help our region to grow.
The summit included the regional prime ministers’ panel on integrating the WB6 in the pan-European digital market, opened and hosted by the RCC Secretary General, Goran Svilanovic. The summit covered 4 major thematic platforms: 01 Digital skills - a collaborative, coordinated and targeted digital skills capacity building; 02 Trust and security - regional and international partnerships for safe and secure open cyberspace; 03 Digital environment networks and services, connectivity and access – the right framework conditions for digital connectivity in Western Balkans; and  04 Digital economy and society – towards a digitized Western Balkans: Improving region’s digital performance and digital competitiveness.
An integral and important part of the Summit was Digital EXPO, gathering companies in the digital industry from the region and wider, showcasing their innovative products and services to the public, and networking with potential partners from government and business sectors.
The Government in Skopje hosted the Summit, co-organized by the RCC in cooperation with the rest of the Western Balkan Governments, European Commission and German Federal Ministry for Economic Affairs and Energy.
More information on the Summit: https://digitalsummitwb6.com
Conclusions