Svilanovic: Western Balkans should work on preserving its environment and address climate change, regardless of its EU accession process 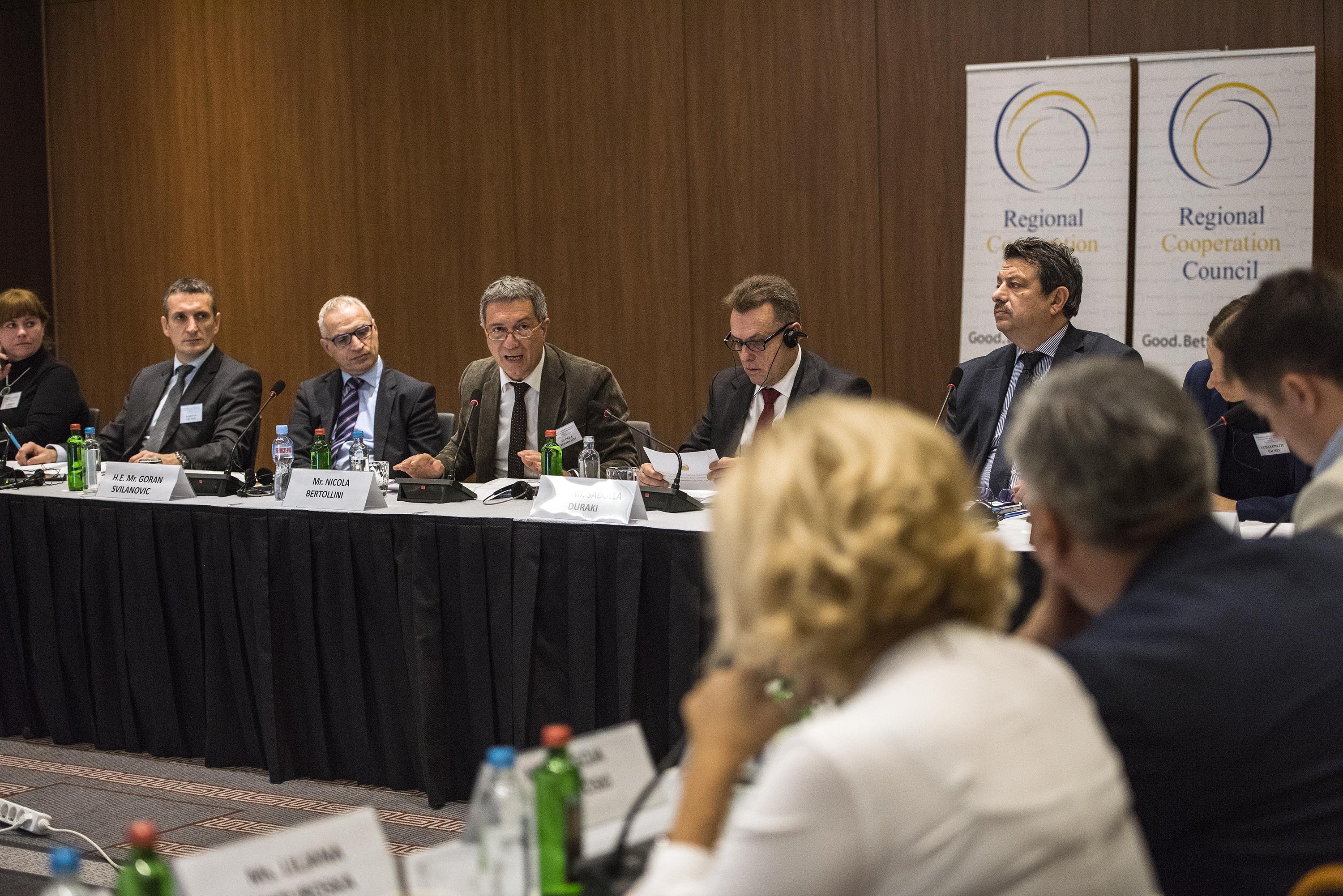 Participants of the 3rd Ministerial Panel on Environment and Climate Action in the Western Balkans, on 21 November 2018 in Skopje (Photo: RCC/Robert Atanasovski)

Skopje – Western Balkans ministers in charge of the environment called for further strengthening of synergies and regional cooperation for the implementation of the environment and climate change priorities in the region, in line with the EU acquis, as well as supported mainstreaming of environment, climate and sustainable development objectives in all policy areas, enhancing cross-sector and inter-Ministerial cooperation, at the ministerial meeting held in Skopje today. The meeting has been organized by the Regional Cooperation Council (RCC) together with the Ministry of Environment and Physical Planning of The Former Yugoslav Republic of Macedonia.

Opening the meeting on behalf of the host, Sadulla Duraki, Minister of Environment and Physical Planning welcomed the participants and expressed satisfaction and his honour to co-host the 3rd in a row high-level meeting on this topic. Minister Duraki also stressed the importance of regional cooperation in the format of the Regional Working Group on Environment (RWG Env), co-chaired in 2018 by The Former Yugoslav Republic of Macedonia and the RCC.

“This regionally-owned working group that supports sustainable development of the region and the implementation of the Environment Dimension of the South East Europe 2020 (SEE 2020) Strategy has been and will continue to explore threats but also ways and possibilities for an adequate regional response to the environmental and climate challenges. We had the honour to co-chair this work during 2018 but we will continue to provide our full support to the work of this Group in the future, in the interest of our citizens. Last, but not the least, we very much appreciate all assistance from the EU in addressing these common challenges  - their guidance, technical, financial and expert support.”

RCC Secretary General Goran Svilanovic underlined that the Western Balkan economies should tackle the environmental and climate change issues despite the noted lack of human and financial resources, scarce experience and, their non EU-member status, stressing that commitment and determination in combating these challenges with all resources available counts just as much.

“The RCC-commissioned Study on climate change in the region shows that mean annual temperature has already raised for 1,2°C, and the growth will continue, while according to the stabilization scenario by the end of this century we can expect additional growth of 1,7°C. The worse scenario being continuation of our irresponsible behaviour, foresees even bigger growth of mean annual temperature, which will reach startling 4°C in the last two decades of the century. This is an alarming call to intensify our efforts towards achieving the commitments under the Paris Agreement on Climate Change, and keep warming well below 2 degrees. The observed changes are not limited to the region’s borders, and therefore, broader and harmonized intervention and cooperation gets full justification. Hence, regional cooperation is a good alternative and method to ensure better response.”

Nicola Bertolini, Head of Cooperation at the Delegation of the European Union in Skopje underlined importance of transposition of the EU aquis into the national policies and legislation in the WB economies, adding that environmental and climate change issues are common to us all.

The Minsters also discussed the joint Declaration that among other issues expresses support to the involvement of civil society on decision-making, strategic planning and implementation, and results' monitoring of environmental policy, programmes and plans, in line with the Aarhus convention, and cooperation in the implementation of the Paris Agreement on Climate Change and commitments to meet the set long-term goals. The Declaration is to undergo comments and feedback of all participating economies, prior to its final endorsement.

Furthermore, the participants were addressed by Janez Kopac, Director of the Energy Community Secretariat, and Gabriele Janezic, Deputy Head of Mission and Consul at the Austrian Embassy in Skopje, who presented priorities of the Austrian Presidency of the Council of the European Union.

The Ministerial meeting was concluded by handing over the Co-Chairmanship to Albanians the next Co-Chair of the Regional Working Group on Environment and in a mutual agreement for a follow up ministerial meeting at the end of 2019.