RoamLike@Home in the Western Balkans: People see it as important as free movement; businesses believe it will spur trade 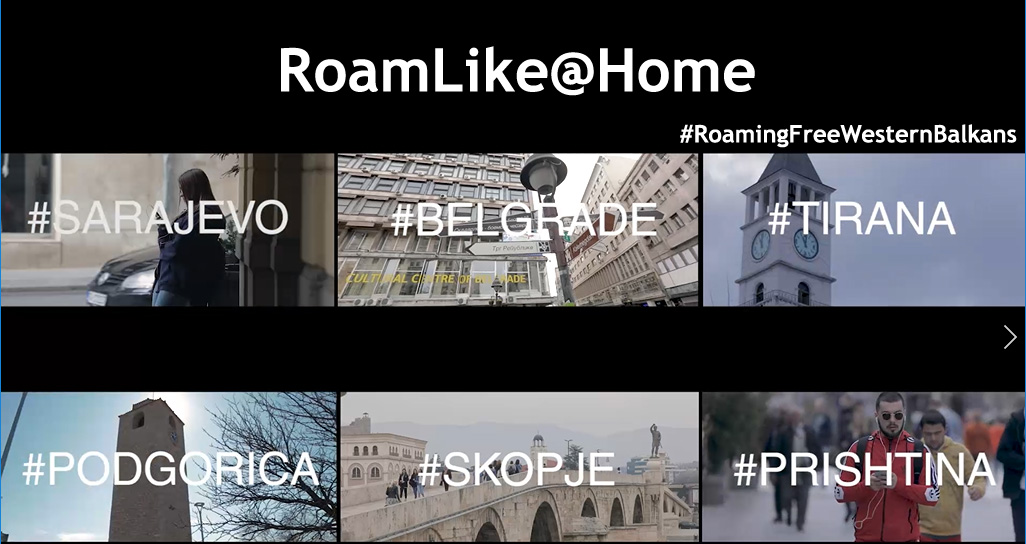 RoamLike@Home in the Western Balkans. RCC asked all 6 region’s capitals what does #RoamingFreeWesternBalkans mean for them (Photo: RCC)

Sarajevo – The people of the Western Balkans (WB), businessman/woman, travellers, students, youngsters, everybody, are in unison when it comes to bringing down the roaming charges in the region – they are looking forward to it and see it as a great benefit to them personally and their businesses. The Regional Cooperation Council (RCC) has asked people in all 6 region’s capitals what does #RoamingFreeWesternBalkans mean for them. Have a look at the video showing what people in Sarajevo, Belgrade, Tirana, Podgorica, Skopje and Pristina had to say.

For business people, math is simple. For example, for businessman with BiH SIM card, a GB in Albania would cost more than 9,500 EUR. That’s why majority of them, 70%1  believe removal of roaming charges in WB would have positive impact on their businesses and spur the trade.

Everyone agrees that roaming charges are a hurdle when traveling anywhere abroad. People shared with us their stories on high phone bills when traveling due to roaming prices, increasing and surpassing their entire travel budget, claiming they will not use it again and hope the prices will go down.

Some told us that it would be great not to think whether mobile data transfer is on or off when passing the border within the region, adding that lower prices of roaming with the EU would also be a benefit. They told us they are looking forward to roaming elimination in the entire Western Balkans and see it as important as free movement. The conclusion was that people of the Western Balkans want to have better connectivity among each other and enjoy free roaming.

The RCC has been carefully listening to what our citizens have to say, and acting upon their needs and concerns. Therefore, the governments of the Western Balkans, with us, the RCC as facilitator, and European Commission assisting in the process, have worked tirelessly for the past year on the new Regional Roaming Agreement, that is to include all WB6, further reduce roaming charges in the first phase and finally eliminate them, paving the way to the reduction of roaming charges with the EU as well.

Once the region’s ministers sign the agreement, it will be a clear message that the region is committed to the European values, just the same as the EU values should be present in the Western Balkans as well. Our citizens would be able to speak, SMS or surf more, wherever in the region they find themselves in, and pay much less, just the same as their fellow EU citizens.

The new Regional Roaming Agreement is part of the deliverables in the area of Connectivity of the WB Multi-annual Action Plan for the Regional Economic Area (MAP REA) that the region’s leaders committed to at the WB Summit in Trieste in July 2017 and the priority agenda endorsed at the 2018 EU-Western Balkans Summit in Sofia. It is also in this context that the Second Western Balkans (WB) Digital Summit is to take place on 4-5 April 2019 in Belgrade, Serbia, bringing together participants from governments, international institutions, businesses, community organisations, academia as well as individuals from the region and Europe, to discuss and propose innovative policy approaches, showcase cutting-edge technologies, exchange ideas and discover latest digital trends and take WB digital cooperation to the next level.

The Summit, hosted by the Serbian government and organized through a collaboration of the Office of Prime Minister Ana Brnabic, Office for IT and eGovernment, General Secretariat, Ministry of Trade, Tourism, and Telecommunications and Chamber of Commerce and Industry of Serbia, is supported by the Regional Cooperation Council. More information is available at the website https://digitalsummitwb6.com/about-the-digital-summit/.

RCC Secretary General, Majlinda Bregu, is to open the Summit together with Serbian Prime Minister, Ana Brnabic, and European Commissioner in charge of Digital Economy and Society, Mariya Gabriel. Ms Bregu will also host the WB Ministerial panel that is taking place on 4 April from 11.30 to 12.30.