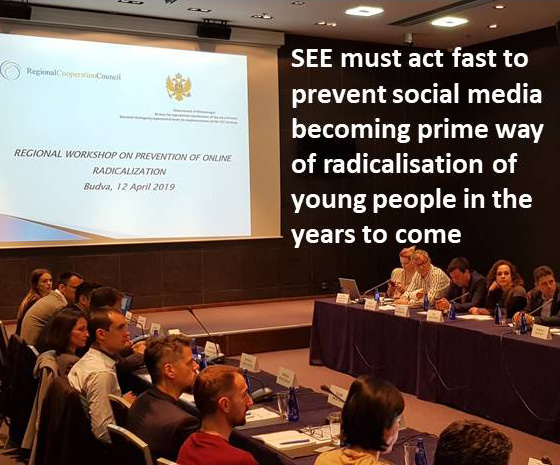 The Workshop was opened by Dragan Pejanović, State Secretary from Ministry of Interior of Montenegro and Zoran Popov, Senior Security Advisor at the Regional Cooperation Council (RCC), who agreed that radicalization leading to violent extremism and terrorism is a complex phenomenon and its prevention requires long-term, sustainable efforts that would involve all relevant actors, different policy areas and actions at local, national, regional and global level.

“European Union (EU) has placed a strong focus on tackling online radicalisation, as the internet is one of the main tools contemporary terrorist and violent extremist organizations use to identify, recruit and train new members, to communicate, use available data and transfer money. Unfortunately, the SEE region does not lag behind the EU in this regard - more than 76% of the citizens are internet users, while 40% of them use all social media. Out of those using social media, the majority are young people”, said Popov, stressing that online radicalization is widespread in some economies, especially among youth, with estimations suggesting that it will become a prime way of radicalization in the years to come. “The region has to act upon this, and make additional efforts, and fast, to prevent it,” added Popov.

State Secretary Pejanović said “that the need to regulate online content remains one of the key challenges, adding the importance of the development of a counter-narrative strategy for internet users, especially youth who are the most vulnerable group, to make them resilient to radicalisation contents. Montenegro has developed some measures to introduce critical thinking, especially focusing on youth. These measures involve engagement training, workshops, sports, etc., which are aimed at raising scepticism and critical approach to extremists' contents“, adding that their implementation required the participation of all groups in society, starting from family, local community, civil society, religious communities, academia and media.”

Despite the efforts to prevent and fight online radicalization, counter-narrative portals online did not manage to gain traction. The workshop participants, including experts from the SEE and the EU, at length discuss ways to address national and regional level recommendations from the Study that RCC commissioned to analyse the state of play of online radicalisation in the region.

The participants are addressing how the internet is used for radicalization, attempting to define responses on various aspects of online radicalization but also to take stock of the current state of play at EU level, including best practices in responses to online radicalization. Finally, they will work on defining regional action, especially in the Western Balkans as the most vulnerable spot, which would bring the best EU practices to the region and set the tone for enhanced cooperation between EU member states from the SEE region and WB.

These responses to various aspects of online radicalization, as defined by the experts at the Workshop, would be mirrored into recommendations for action of the relevant national authorities in the region. The implementation of the agreed actions in the Western Balkans that would follow would be done through Integrative Internal Security Governance (IISG), enabling coordinated, aligned and sustainable efforts.

The Workshop was organised by the RCC and Bureau for operational coordination of Security Services of Montenegro.