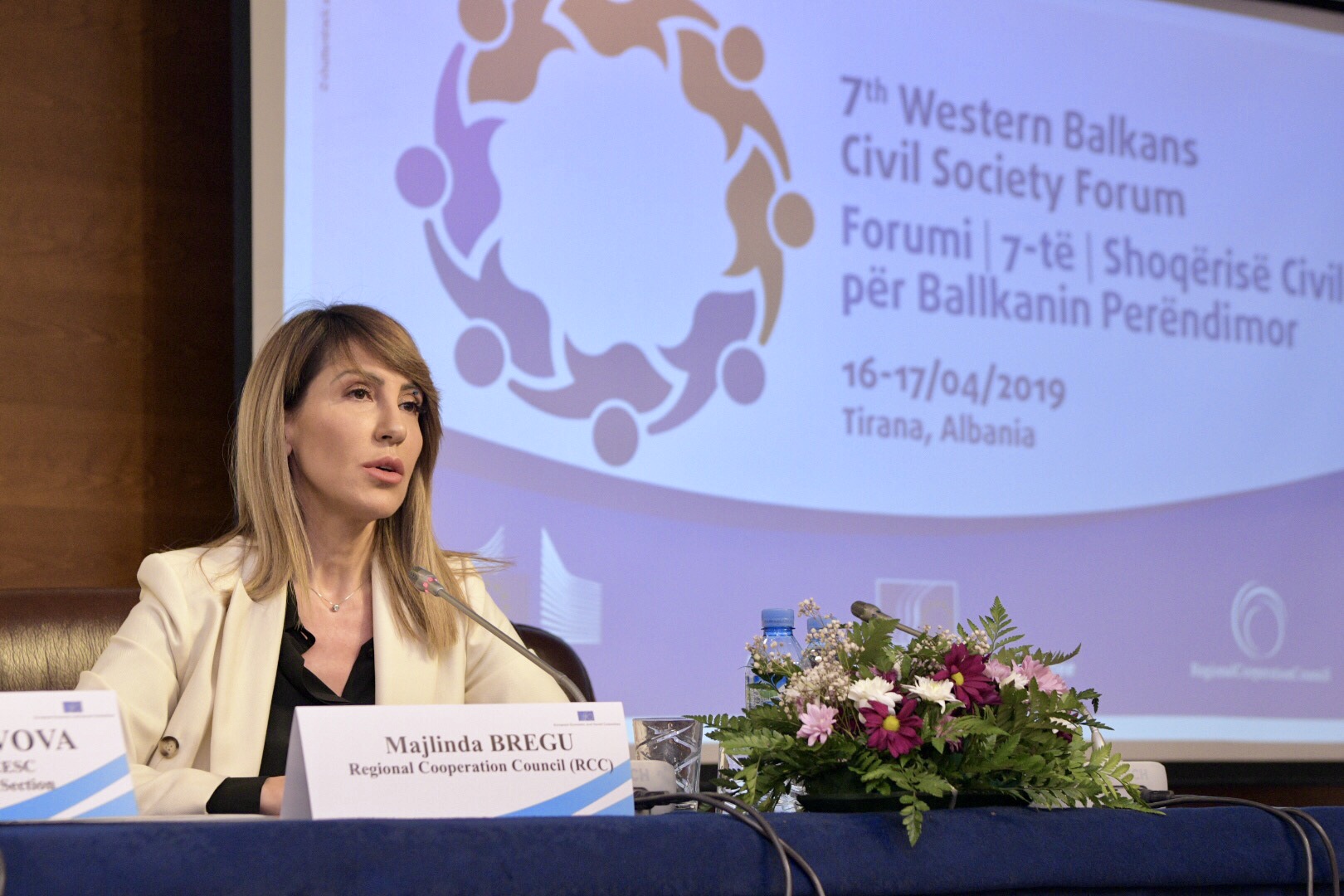 Tirana – „The level of civic trust in governments and politics in general in the Western Balkans (WB) is alarming, as 60% of citizens do not trust neither the governments, parliaments nor the judicial systems, according to findings of new edition of the Balkan Barometer, based on the data from 2018”, said  Majlinda Bregu, Secretary General of the Regional Cooperation Council (RCC), addressing the participants of the 7th Western Balkans Civil Society forum at the inaugural session, in Tirana today.

“According to the same findings, citizens of the WB believe that civil society is the most functional body that can hold the governments accountable – every other citizen believes that civil society can play a critical role to the actions of governments, better than the media or parliaments. So, as the trust of citizens is placed with civil society organisations, expecting them to exert pressure on the governments and to have a critical approach, they need to focus on four key elements: rule the law; strengthening of the institutions; exercise the culture of civil pressure, not allowing the first two to be violated; and finally, to avoid becoming hostages of governments’ funds that actually buy the critical space. The civil society does not need to convince anyone about their irreplaceable role, especially in our region. They need to act on the power they have.” Bregu invited CSOs to work with the RCC and the region in developing the new South East Europe 2030 strategy.

Luca Jahier, the President of the European Economic and Social Committee (EESC), organiser of the event, Sokol Dedja, Deputy Minister for Europe and Foreign Affairs of Albania, and Angelina Eichhorst, Director for Western Europe, Western Balkans and Turkey at the European External Action Service (EEAS) took part in the Forums' inaugural session together with RCC Secretary General Bregu, expressing their views on engagement of the civil society in the WB.

EESC’s Luca Jahier stressed the importance of the role of civil society in promoting reconciliation in the region, underlining his support to the European Union (EU) enlargement process as being ‘in the interest of both our partners from the WB and of the EU and should remain one of the EU's priorities”.

Albanian Deputy Minister Sokol Dedja said that legitimacy of democracy is ensured only through participation of civil society, adding that they are committed to “a genuine involvement of CSOs to ensure popular support to reforms and make sure these reforms are sustainable”.

EEAS's Angelina Eichhorst expressed her full support to civil society organisations, reiterating that they “are the key to fostering stronger commitment towards a change in political culture”.

The Western Balkans Civil Society Forum that started in Tirana today will last for two days, tackling many challenging topics: the role of civil society organisations in promoting regional cooperation (trade and investment, connectivity and people to people relations), the state of social dialogue, as well as enabling civic space in the region. The Forum is expected to issue a final declaration with recommendations from civil society organisations at the end of the event.

The Forum brings together approximately 150 participants, including a broad range of civil society representatives from the EU and the Western Balkans, as well as representatives of EU institutions, international organisations and governments of the region.

Like in previous years, the RCC provided support to the 7th Western Balkans Civil Society Forum, organised by the EESC, taking place in Tirana on 16-17 April 2019.