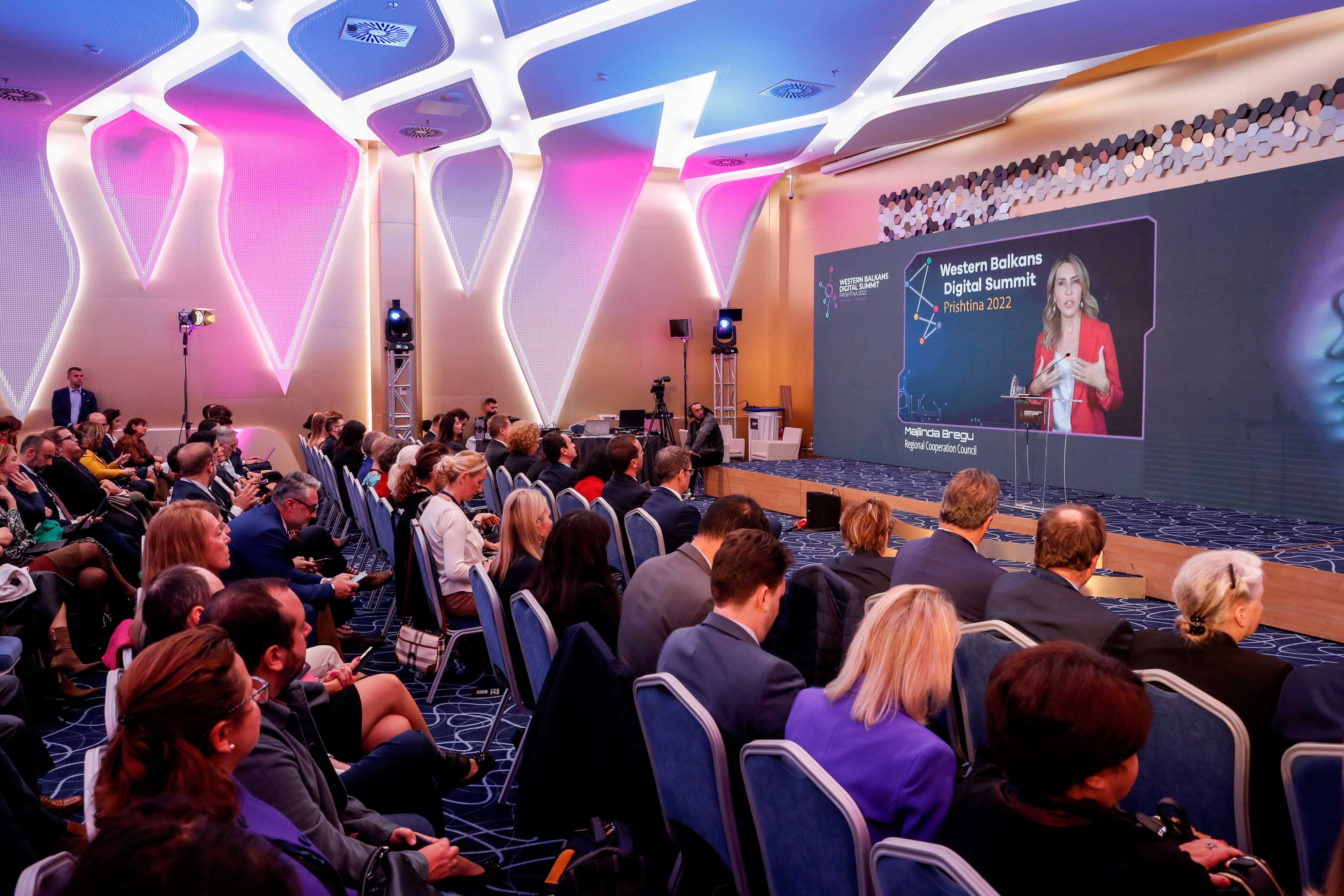 RCC, supporting WBDS for the 5th time in a row, to host a panel on digital social inclusion and education

Pristina – “Today is a great day for Pristina.  It is the centre of gravity of one of the greatest Berlin Process initiatives – the Western Balkans Digital Summit. Pristina today bursts and radiates with the dynamism of so many start-ups, companies, experts and policy makers – all united in their drive to harness the potentials of digitisation for our region’s growth. It is the same vibrant spirit and energy we were privileged to see in flesh just two weeks ago when we organised the dynamic, youth driven event - Balkathon 3.0. Youth’s drive and vigour is such a force to be reckoned with - inspiring, yet at the same time compelling us, policy makers to work much harder, smarter, swifter,” said Majlinda Bregu, Secretary General of the Regional Cooperation Council (RCC) at the opening of the 5th Western Balkans Digital Summit (WBDS) in Pristina today.

“Digitalisation in our region has its two sides of the coin. On one hand there have been great broadband connectivity strides; massive spread and uptake of e-services; ICT is becoming a main exporting service and economic asset for most of our economies,” said Bregu adding that Kosovo*, for example, is the home of a vast number of world-class talents. “The highest rate of internet users in the region - standing at 93%; with a huge number of companies registered in the ICT sector - amounting to 1000; exporting 130 million services regarding ICT products only last year. With over a year now in implementation, we take pride in the major success of the Regional Roaming Agreement with a total of 143 million minutes of outgoing calls by our roaming users in 2021, representing 50% annual growth compared to 2019 and 2020.”

“On the other hand, though, our region is recently struggling with serious cyber-attacks. Our digital literacy is still low (24% to 47% compared to 54% in EU), as is the level of cross-border interoperability. Disinformation and fake news flourish. So, the region needs more cooperation, not less. It is important to separate everyday arguments and viciousness (which is often driven by digital anonymity and the perception of division from being online and not face-to-face) from facts, truth and reality. Digitalisation is one of the great challenges of this century and as such necessitates both a regional and a European approach. It also necessitates an intergenerational approach – keeping our youth’s priorities and well-being at heart. The Common Regional Market agenda our Leaders committed to has an array of measures underpinning the digital transformation of our region. Their full implementation towards a seamless digital market in WB can be a true game changer for our region’s growth trajectory,” added Bregu.

“This Summit comes at a particular juncture for our region. While geopolitical, inflationary, energy, food, climate and other crises loom over, we also try to find some silver linings: the long overdue start of negotiations for Albania and North Macedonia; the encouraging State of Union address of President von Der Leyen on our region’s future in the Union; and the recent positive announcements by Germany, France and Poland on the continuation of the Berlin Process as an additional means to foster regional cooperation and EU integration of WB. At the same time, we can’t but insist that bold, decisive and definite steps for our region’s EU accession are taken without further delays, including the remiss of visa liberalisation for Kosovars and candidate status for Bosnia and Herzegovina,” concluded Bregu.

Later today the RCC and the European Commission will host WBDS panel dubbed Digital and Inclusive Made Compatible. This thematic panel will focus on specific needs of different vulnerable social groups and communities including Roma, women, and youth in digital skills. The panel participants are to present challenges of digitalisation and necessity for improvement of digital skills in the said social groups including modalities of entrepreneurial and digital education and training as well as present success stories from the region on the benefits of digitalisation. The panel will be addressed by Georgi Dimitrov from DG for Education, Youth, Sport and Culture, facilitated by Marius Jitea, and moderated by Pranvera Kastrati, RCC Common Regional Market Coordinator & Senior Expert on Economic and Digital Connectivity. Panellists are Redzep Ali Cupi, Director of Roma Education Fund; Petrica Dulgheru, Roma Entrepreneurship Development Initiative; Marko Serafimovski, Semos Education; and Nikola Ristic, CEO of DP Media. This activity is a part of the EU’s Digital Agenda for the Western Balkans, facilitated by the RCC and financed by the European Union, and contains multitude of regional actions across all Common Regional Market (CRM) Action Plan components.

More info on the summit