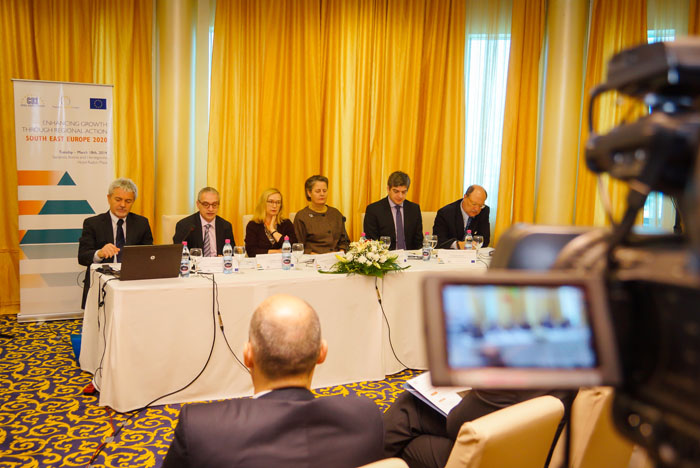 Participants of the conference 'Enhancing Growth through Regional Action – South East Europe 2020', organised by CEI and the RCC Secretariat, on 18 March 2014, in Sarajevo, BiH (Photo: CEI)

SARAJEVO – The successful completion of project Improving Cooperation in South-East Europe by Actions for Strengthening the Regional Cooperation Council (RCC) was marked by a final conference that was held in Sarajevo, Bosnia and Herzegovina, today.

The conference titled Enhancing Growth through Regional Action – South East Europe 2020 highlighted the major results of the Project and further focused on the pending implementation of the RCC's South East Europe (SEE) 2020 strategy.

“This project was one of the examples of the special attention the European Commission (EC) is paying to the regional cooperation in SEE. The very concrete support EC provides to different regional structures actively engaged in promotion and strengthening of the regional cooperation is an important complement to the efforts the countries of the region are investing in their EU accession process,” said RCC Secretary General, Goran Svilanovic.

“The time frame of the Project implementation matched with some very important developments in RCC: production of organisation’s Strategy and Work Programme 2014–2016, and creation and launching of our SEE 2020 Strategy, as its central pillar. The SEE 2020 will help us introduce a new period of regional cooperation, one that has clear objectives and targets, one that’s focused on those areas that offer greatest potential for joint action and result, and one that has mechanisms to follow through on what has been agreed.”

The Project of 0.9 million euros, aimed at supporting regional cohesion in South East Europe, the European Union (EU) enlargement process and strengthen the RCC Secretariat was funded by the EU and co-funded and implemented by the Central European Initiative (CEI) for the past 28 months.

“We believe that economic growth and job-creation in the Western Balkan Countries are essential for citizens’ understanding of and support to the strengthening of common institutions. This is why the CEI in the year of its 25th anniversary is keen to validate its working system, enhancing regional transnational cooperation through a combination of multilateral diplomacy and project implementation,” said Margit Waestfelt, CEI Alternate Secretary General. “CEI mobilisation for cohesion and integration in the region will continue in a fully consistent way, with the strategic framework shaped by the SEE 2020 Strategy”

“The goal of the Austrian Presidency is to fully deploy the potential of the CEI as a clearing house between different regional and international organizations working in a geographic area stretching from the Baltic Sea to the Black Sea and from the Danube to the Adriatic Sea,” added Ambassador Heidemaria Guerer, Austrian Presidency of the CEI.

The CEI-lead Project has had a positive multi-folded impact: it contributed to improving and enhancing of the regional cooperation, both at the level of transnational organizations and by networking of national stakeholders, in several specific areas and sectors in SEE, such as growth of local economies, rural innovation and creative industry, but also stepped up the partnership based cooperation between the RCC and CEI.

It also succeeded in bringing together public broadcasters from 9 countries from the region participating in the European Association of Public Service Media in SEE around a joint production endeavour. This cooperation resulted in a 90-minute documentary film entitled “How do I see my neighbour?”, which was jointly edited and aired in all the countries gathered around the project.

Renzo Daviddi, Deputy Head of the Delegation of the EU to Bosnia and Herzegovina said that countries of the South East Europe must move closer in the same direction, which is joining the European Union.

“This requires thorough economic reforms and the countries that embark on these reforms would benefit from them enormously. The SEE 2020 strategy is in that regard important agenda for achieving this goal for the countries of the region, especially given the EU’s prioritisation of economic governance in the enlargement process.“

The project’s closing conference was organised by CEI and the RCC Secretariat. Beside the RCC and CEI representatives and diplomatic delegations of their participating countries in Sarajevo, the event gathered, partners and stakeholders from the region, representatives of the European Commission and relevant international financial institutions, agencies and private sector.