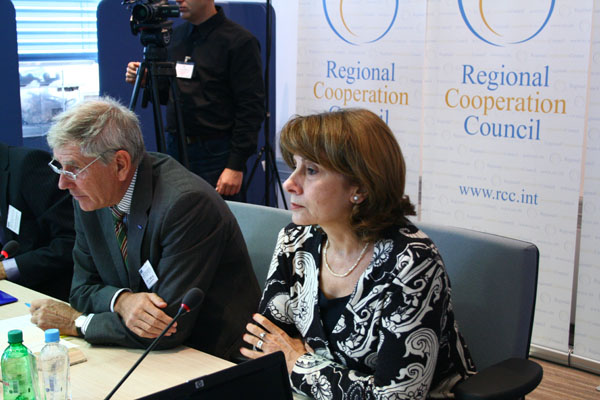 SARAJEVO – A regional workshop on democratic policing organized by the OSCE Strategic Police Matters Unit with the support of the Regional Cooperation Council (RCC) started in Sarajevo today.

The two-day executive-level event, gathered more than 40 senior police officers from OSCE and RCC members from South-Eastern Europe, policy and management experts from the OSCE region and international organizations as well as civil society. Participants will discuss the practical application of best practices in the law enforcement field with a special emphasis on democratic policing, strategic planning and good governance for managing police reform in the region.

“To thoroughly reform a police structure, you need a lot of time," OSCE Senior Police Adviser Knut Dreyer said at the opening of the workshop. "The most important task here is to change the internal police culture, which frequently involves departure from previously-held philosophies of traditional policing. The police leadership must be determined to face the challenge of transformation by undertaking careful strategic planning to manage the structural and cultural changes.”

Jelica Minic, Deputy RCC Secretary General, highlighted the concrete impact this type of activity has had on the efficiency of the police work. “The region has been working on police reform for the past 15 years. Now, we have started seeing the results of such efforts. The police have become more focused on serving the community. Still, a lot of work remains to be done, especially in developing human resource management systems in law enforcement, also in light of EU accession requirements in the area of justice and home affairs.”

The workshop is part of a series of OSCE-facilitated regional events focusing on democratic policing. Previous events were held in Central Asia and in Eastern Europe.

Over the last decade, the OSCE has supported police reform in South-Eastern Europe, the South Caucasus and , including through publications, such as the Guidebook on Democratic Policing, produced by police experts from the OSCE Secretariat and participating States.

The RCC Secretariat sustains an integrated regional approach on police co-operation and reform, through its recently-adopted Strategy and Work Programme 2011-2013. Together with relevant stakeholders, the Secretariat is preparing a Strategic Regional Document which will enhance coordination of regional organizations with the EU and international agencies.