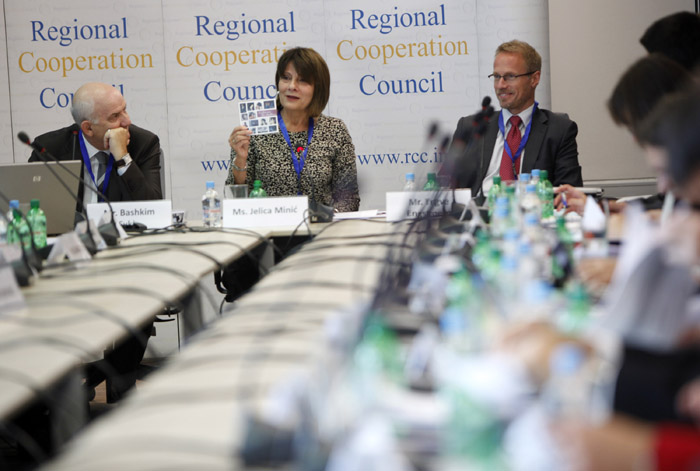 Jelica Minic (centre), Deputy RCC Secretary General, Bashkim Sykja (left), Director of Competitiveness Policy Department at the Ministry of Economy, Trade and Energy of Albania and Yngve Engstroem, Head of Regional Cooperation and Programmes Unit at the EC’s Directorate General for Enlargement, at the opening of the 11th SEEIC meeting, in Sarajevo on 3 October 2012. (Photo: RCC/Dado Ruvic)

SARAJEVO – A set of nine targets for integrated, smart, inclusive and sustainable growth in the region until 2020 was supported by the members of the South East Europe Investment Committee (SEEIC), during a meeting held at the Regional Cooperation Council (RCC) Secretariat in Sarajevo today.

The proposed targets for the South East Europe (SEE) 2020 Strategy include growing the region’s total value of trade in goods and services to more than a quarter trillion USD compared to 2010, reducing the trade deficit, and growing intra-regional trade in goods by over 200%. The Strategy envisages increasing overall foreign direct investment inflows to the region by 150%, increasing GDP per person employed as well as exports per capita, increasing the overall employment rate, and improving government effectiveness by 20%.

In her opening remarks, Jelica Minic, Deputy RCC Secretary General, underlined that the very process of transferring the SEEIC to the RCC proved to be a major catalyst that accelerated development of the SEE 2020 Strategy, to be adopted by the end of 2013.

“The SEE 2020 will open up possibilities for associating more closely regional initiatives with EU actions. It can help provide a framework for intervention for the Multi-Beneficiary Instrument for Pre-accession Assistance (IPA) as well as for other interested donors.”

Bashkim Sykja, Director of Competitiveness Policy Department of the Ministry of Economy, Trade and Energy of the Republic of Albania, as the co-chair of SEEIC, pointed out that the ultimate objective of the targets is to make all SEEIC members more competitive and bring the enlargement countries closer to EU membership.

“The regional headline targets 2020 will be transposed into national actions. They will consider every country’s specificity, which is crucial to their success.”

“The SEEIC has become a central point on the map of the regional cooperation and, with the back-up of the RCC, it has a key role to play in the development of regional strategies to advance the region’s economic development and integration with the European Union”, said Yngve Engstroem, Head of Regional Cooperation and Programmes Unit at the European Commission’s (EC) Directorate General for Enlargement.

“It is important that the IPA assistance takes into account regional priorities and supports them. The Commission will examine the possibility of more targeted use of Stabilisation and Association Agreement meetings to tackle the issue of competitiveness and employment. In 2013, the EC will start a dialogue with the enlargement countries on employment and social reform programmes, pursuing a comprehensive approach to employment and social policy.”

Engstroem added that the EC would promote improved participation in EU programmes, so that the enlargement countries can work with Member States on flagship initiatives of Europe 2020 strategy.

The participants finalized a draft Statement for the SEEIC Ministerial Conference scheduled to take place on 9 November 2012, in Tirana, Albania, that is to integrate the proposed regional targets into a coherent and ambitious document guiding further development and implementation of the SEE 2020 Strategy. They also received updates on the multi-beneficiary IPA Private Sector Development Programming for 2013.

Finally, the participants were presented with a CD Les femmes des Balkans, comprising 14 traditional songs from all of the countries of the region, performed by female artists such as Esma Redzepova, Biljana Krstic, Amira Medunjanin, Tamara Obrovac, etc. The CD is to contribute to a positive branding of South East Europe and support creative industries in the region.