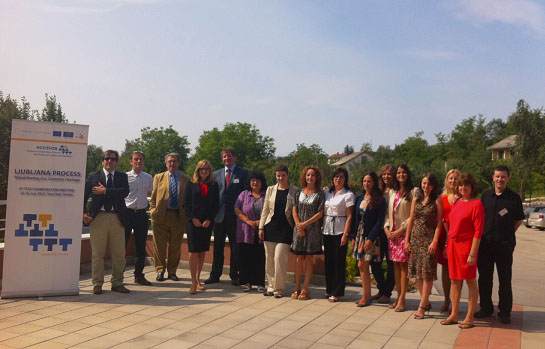 SARAJEVO/NOVI SAD, 15 July 2013 – Three Western Balkans sites have been chosen for a €2.8 million worth EU-funded project to support preservation and restoration of cultural heritage in the region, the European Commission announced today at a meeting of the Regional Cooperation Council (RCC) Task Force on Culture and Society, held in Novi Sad, Serbia.

“European Commission decided on three sites chosen to be financed under the special EU Grant, whose implementation will raise impact and visibility of Ljubljana Process”, said Wenceslas de Lobkowicz, Advisor for Cultural Heritage in the European Commission’s Directorate General for Enlargement.

Projects to be finance are: the Franciscan Monastery of Bac in Serbia, Banja Luka Kastel in Bosnia and Herzegovina, and Apollonia Archaeological Site in Albania.

Borče Nikolovski, Chair of the Task Force, underlined importance of successful realisation of EU funds of 500,000 euro for rehabilitation of monuments in need of urgent interventions, preliminary investigation, project design and creation of management plans.

“Six projects are already ongoing. The total of 25 projects will benefit from this grant through sub-grants or tendering procedure.”

Mladen Dragašević, Head of the Building Human Capital and Cross-Cutting Issues Unit of the RCC Secretariat, emphasized importance of synergy between all current activities within Ljubljana Process and the role of RCC Task Force on Culture and Society, as coordinator of the culture and creative industries dimension of the South East Europe (SEE) 2020 strategy.

“As the main component of the RCC Strategy and Work Programme 2014-2016, SEE 2020 will focus on concrete, tangible results in rehabilitating cultural heritage and its contribution to economic and tourism development of local communities and countries in the region.”

The sixth meeting of the RCC Task Force on Culture and Society also adopted the Interim Narrative Report on the activities of the Task Force and its Secretariat since April 2013. The participants reviewed South East European Heritage Assessment Reports, and the progress in establishing national task forces, developing business planning and fundraising methodologies.

The meeting, organized by the Task Force Secretariat, has gathered high-level officials from RCC participants in South East Europe, representatives of the RCC Secretariat, and the European Commission.