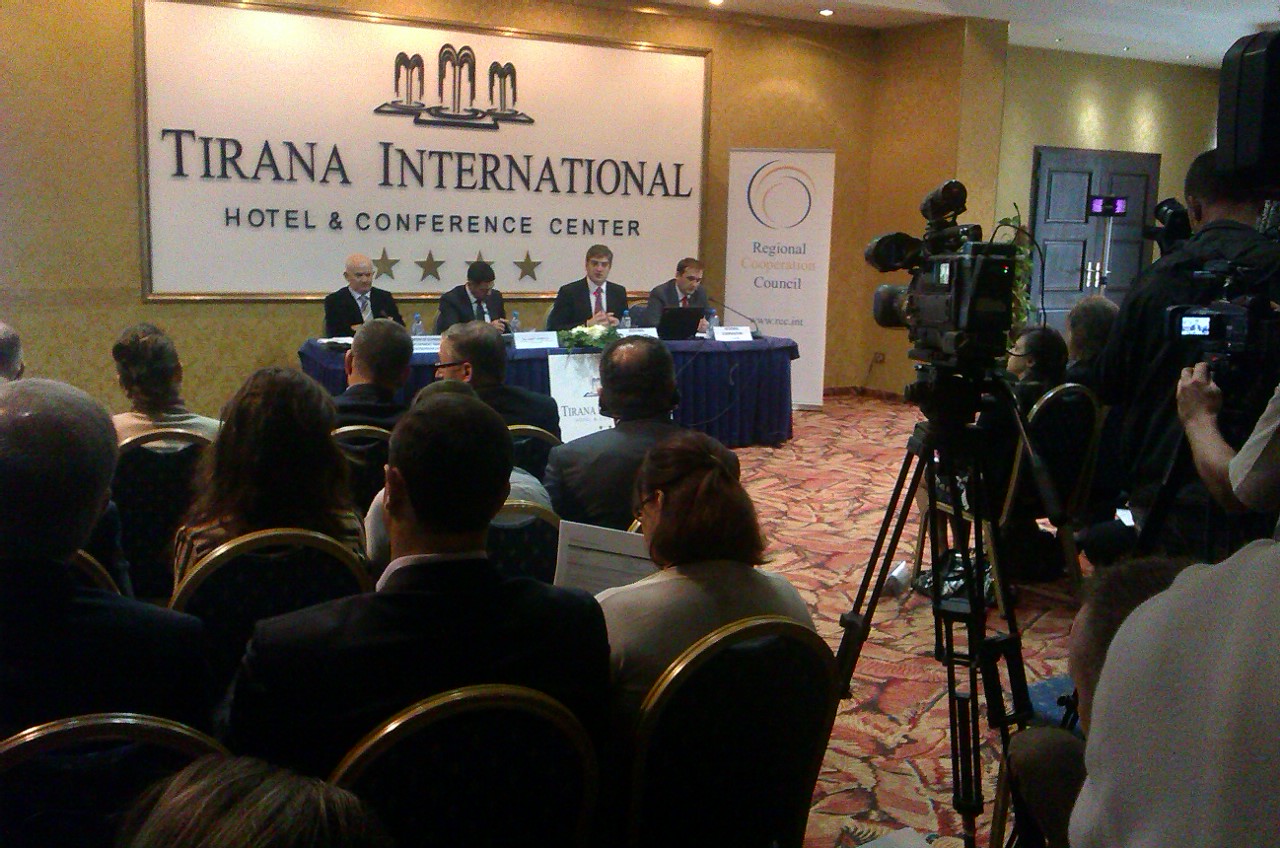 RCC presenting its SEE 2020 strategy, at a workshop in Tirana on 1 October 2013. (Photo RCC∕Dinka Zivalj)

SARAJEVO/TIRANA – Experts of the Regional Cooperation Council (RCC) Secretariat concluded in Tirana today a series of presentations of the first draft of the South East Europe (SEE) 2020 strategy for creating one million new jobs in the region, with participation of Arben Ahmetaj, Minister of Economic Development, Trade and Entrepreneurship of Albania. The document is being prepared by the RCC Secretariat, in close consultation with governments and initiatives from South East Europe.

The event is the last of seven workshops the RCC has organized in the Western Balkan region in the period between 10 September and 1 October 2013 (Skopje, Pristina, Podgorica, Sarajevo, Zagreb, Belgrade and Tirana) gathering around 300 participants as part of the outreach effort on the SEE 2020 strategy.

“The most important goals of the strategy to be reached by 2020 include: employment growth from 39% to 44%, boost of total SEE trade in goods and services from 94 to 210 billion euro, and the rise of the region’s GDP from 36% to 44% of the EU average”, said Sanjin Arifagic, Senior Expert on Economic and Social Development at the RCC Secretariat and SEE 2020 Coordinator.

“We also want to see the increase of overall annual FDI inflows to the region by at least 160% and additional 300,000 highly educated people on the job market, with a realistic perspective to get decent jobs.”

Achieving these targets should contribute to generating 1 million new jobs in South East Europe by 2020. To make this happen, innovation, skills and trade must be upgraded and national governments will need to be far more efficient than they are nowadays.

The main purpose of the in-country workshops, co-hosted by line ministries, was to engage in broader consultations on the first draft of the SEE 2020 strategy and expand the stakeholders’ base to include civil society, private sector, donors and other interested parties.

“The RCC has noted all comments and suggestions for improvement of the document voiced by the workshops’ participants”, said Arifagic. “All received inputs will be incorporated into the next draft of the strategy as appropriate.”

The events were organized by the RCC Secretariat, in cooperation with respective ministries in Albania, Bosnia and Herzegovina, Croatia, The Former Yugoslav Republic of Macedonia, Montenegro, Kosovo* and Serbia.

The document itself draws inspiration from the EU strategy Europe 2020.

The first draft of the SEE 2020 strategy, along with a number of presentations and other relevant documents, is available at http://www.rcc.int/pages/0/60.