The Western Balkans Civil Society Forum at the Vienna Summit 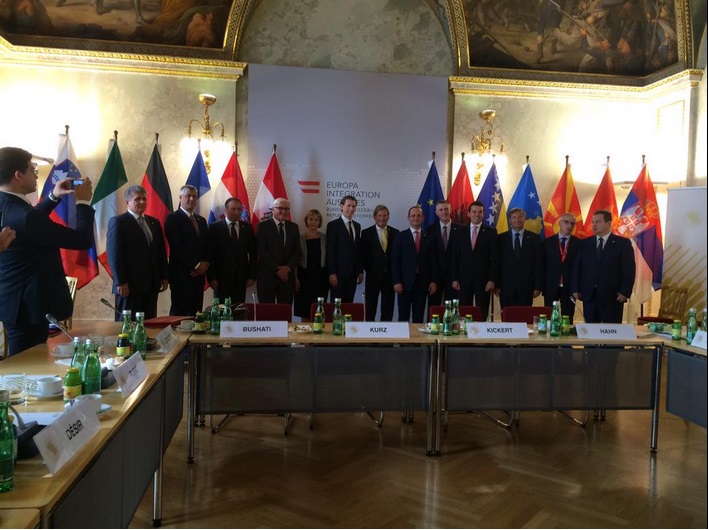 The Regional Cooperation Council (RCC) rounded off its participation at the Vienna Summit yesterday with the Secretary General, Goran Svilanovic, participating in the meeting of the Ministers of Foreign Affairs and the SEE2020 Coordinator, Sanjin Arifagic, attending the meeting of Economics ministers. The Vienna Summit was a continuation of the Berlin Process which is meant to keep on pushing along the Western Balkans EU accession process in the period where we know that there will not be any more new EU members at least until the end of this decade. The Berlin Process continues to carry the enlargement torch and is a major instrument in assisting the economies of the WB6. RCC Secretary General, Goran Svilanovic, described it as “the most important event in the region’s political agenda in 2015”.

But the Vienna summit will not just be remembered for the political and economic agreements, but also because, for the first time ever, it included a Civil Society component and gave a voice to the numerous organisations which have been fighting hard to get the ear of their respective governments and regional and EU institutions. The RCC has played a prominent role together with other organisations involved – The Austrian Ministry for Europe, Integration and Foreign affairs, the ERSTE Stiftung, the Friedrich-Ebert-Stiftung and the European Fund for the Balkans. On Wednesday evening, at a major event in an old bread factory, now a cultural centre, six committed citizens representing the Western Balkans civil society met and spoke with WB political leaders and an EU representative. The debate focused mostly on economic and education issues the region is still struggling with, and the CSOs voiced their thoughts, concerns and fears, in an attempt to share the most pressing issues with the political leaders.

The gathering was introduced by the Austrian Minister of Foreign Affairs, Sebastian Kurz, while Edi Rama, Prime Minister of Albania; Aleksandar Vučić, Prime Minister of Serbia; Igor Lukšić, Deputy Prime Minister and Minister of Foreign Affairs of Montenegro, Igor Crnadak, Foreign Minister of Bosnia and Herzegovina and Johannes Hahn, the EU Commissioner for European Neighbourhood Policy & Enlargement Negotiations were there to try and address the concerns of the Civil Society which was represented by: Ardian Haçkaj, Director of the public policy platform “Shtetiweb” at the Cooperation and Development Institute, Albania; Meliha Bajramović, Coordinator of  “Plenum Zenica”, Bosnia and Herzegovina; Faik Ispahiu, Director and Executive Producer of the Balkan Investigative Reporting Network and Internews, Kosovo*; Dona Kosturnova, Executive Director of the “Youth Educational Forum”, The Former Yugoslav Republic of Macedonia; Dejan Milovac, Director of the “Center for Investigations” and Deputy Director of “MANS”, Montenegro; Aleksandar Simurdić, Secretary General of the “European Movement”, Local Council Novi Sad, Serbia.

The Western Balkans civil society Forum debate heard also the “Unheard voices”; representatives of five CSOs from the region (Women Rights Centre from Montenegro, Balkan Sunflowers from Kosovo*, Plenum Gracanica from BiH, Half Way There from Serbia and Open Gate from The Former Yugoslav Republic of Macedonia), presenting their work and everyday struggles and challenges. It was an emotional presentation moderated by the European Parliament Vice President, Ulrike Lunacek, and Chairwoman of the ERSTE Foundation Advisory Board, Doraja Eberle.

As an overture to the discussions, the choir and orchestra “Superar” held a mini-concert for at the Ankerbrotfabrik, and the musicians were actually children from Austria, Bosnia and Herzegovina, Croatia and Serbia who ended their programme with the European Anthem, the Ode of Joy from Beethoven’s 9th Symphony.

Earlier on Wednesday, the RCC took part in the Western Balkans Civil Society Forum Workshops, where a number of CSOs from the region worked on recommendations on enhancing regional cooperation, securing freedom of expression, and creating jobs and prosperity. The conclusions of these discussions were presented to WB leaders at the summit yesterday, thus kicking off a process of prolonged civil society engagement in the political and economic life of our region. The RCC will continue to assist by including civil society components in its activities in the future.

* This designation is without prejudice to positions on status and in line with UNSCR 1244 and the ICJ Opinion on the Kosovo declaration of independence.
More news