RCC at the SEE Regional Conference: “Working Together Towards EU Accession” 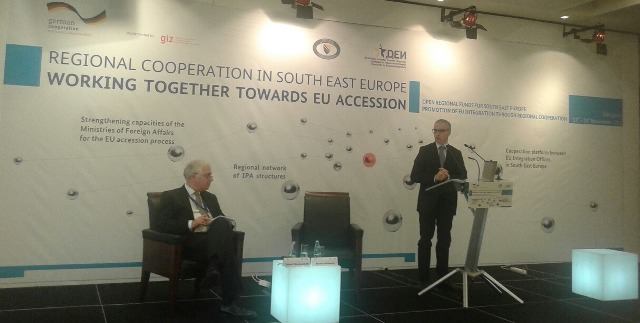 RCC Secretary General, Goran Svilanovic (right), speaking in Sarajevo at the conference on Regional Cooperation in South East Europe - "Working together towards EU accession". Mr. Eckhart Stratenschulte from European Academy, Berlin as a moderator on the left. (Photo: RCC/Nenad Sebek)

The RCC Secretary General spoke about the recent EU Enlargement Strategy and Annual Progress Report and the aspirants’ capacities to meet the political and economic criteria and their ability to assume the obligations of EU membership. Svilanovic said that the progress in the reform agenda needs to be strengthened with a special emphasis on implementation and track record adding that “regional cooperation will make an important contribution, mainly within the connectivity agenda and via good neighbourly relations.”

Svilanovic welcomed the European Commission’s (EC) support for the South-East European Cooperation Process (SEECP) and the RCC as well as the Berlin Process through which “the RCC has been invited to contribute and coordinate activities in two areas of utmost importance for the region – mobility and growth.” He presented the main areas of RCC’s focus: skills and mobility, competitiveness, connectivity and good governance.

The RCC Secretary General also spoke about RCC’s work in the security policy area; especially about the development of the Regional Platform for Countering Radicalisation and Violent Extremism Leading to Terrorism and Foreign Terrorist Fighters in SEE (SEE Regional CVE-FTF Platform).

The conference “Regional Cooperation in SEE: Working together towards EU accession” gathered around 200 experts from regional and international organizations as well as representatives of the academia, civil society, think tanks from the region, European Union and also SEE and German and Austrian Governments and the European Commission. The aim of the conference was to create opportunities for furthering the dialogue and networking of partners and neighbours from SEE and the EU.