Three million euro for boosting jobs in the Western Balkans 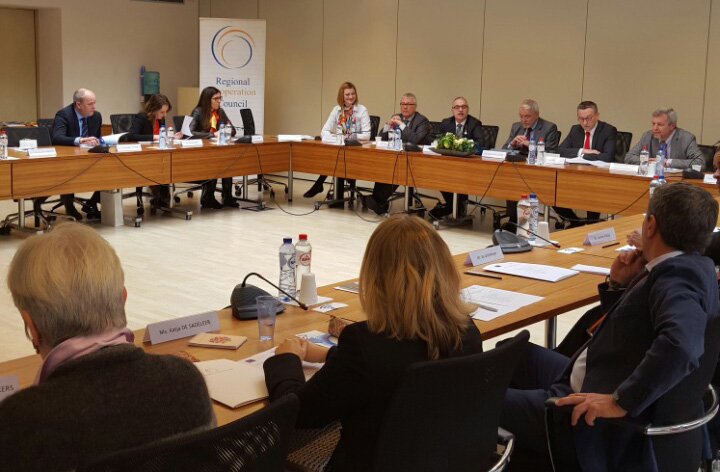 RCC and ILO will jointly create a Western Balkans Platform on Employment and Social Affairs in the framework of a new European Commission funded project signed in Brussels on 1 March 2016. (Photo: RCC/Mimika Loshi)

Brussels - The International Labour Organization (ILO) and the Regional Cooperation Council (RCC) will jointly create a Western Balkans Platform on Employment and Social Affairs in the framework of a new European Commission funded project signed today in Brussels.

The 3 million Euro project, “Economic and Social Affairs Platform” (ESAP), will be jointly implemented by the ILO and the RCC in Albania, Bosnia and Herzegovina, Kosovo*, Montenegro, Serbia and The Former Yugoslav Republic of Macedonia. It will strengthen regional cooperation and institutional capacities of national administrations, employers’ and workers’ organizations enabling them to develop and effectively implement labour market and social policy reforms and thereby advancing their EU pre-accession process.

Signing the agreement today, RCC Secretary General, Goran Svilanovic, said that “by joining forces with DG Employment, Social Affairs and Inclusion, ILO and the Western Balkan governments, the RCC expects to contribute to the strengthened capacities of the public administrations for improved results and monitoring of employment, human capital and social policies”.

Heinz Koller, the ILO Regional Director for Europe and Central Asia, added that “the new ESAP initiative will add a regional dimension to existing cooperation with the EU. This will facilitate and encourage cross-fertilization and networking among labour market institutions in the Western Balkans and between them and EU institutions“.

Vanja Ivosevic, RCC Senior Expert for Smart Growth, reiterated that “RCC will on the one hand, work with public employment services to boost their capacities and prepare them for future participation in EURES and on the other, enhance regional cooperation through a structured regional dialogue on employment and social policies contributing to the implementation of national reforms and the agreed SEE 2020 targets aimed at increasing overall employment in the region”.

The ESAP will last 36 months and its project team will be based in Sarajevo. It will establish structured dialogues on employment and social affairs between Western Balkan governments and social partners. The project will encompass face-to-face and virtual activities, such as sub-regional meetings, bilateral exchanges, and development of new tools and information material. A virtual platform will be set up to follow and complement the in-person activities.