RCC’s Balkan Barometer 2016: The region is moving forward but unemployment, the economic situation and corruption remain the most pressing issues 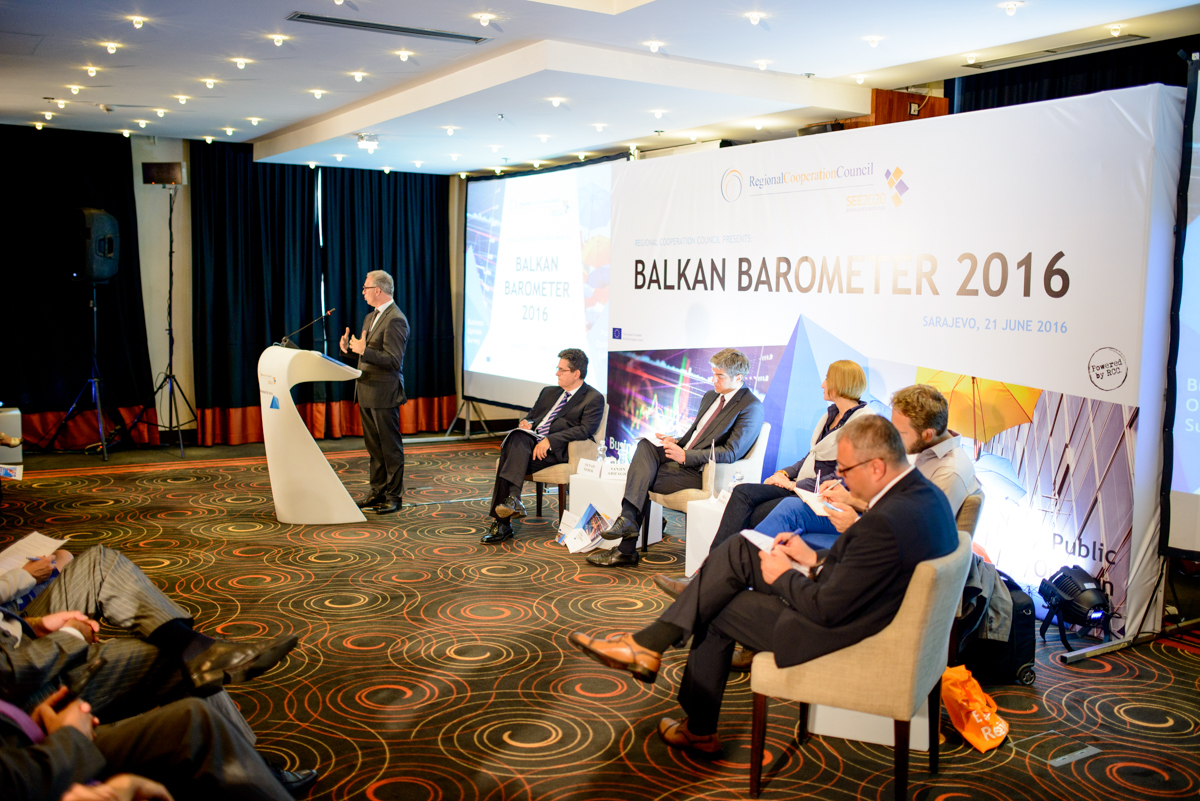 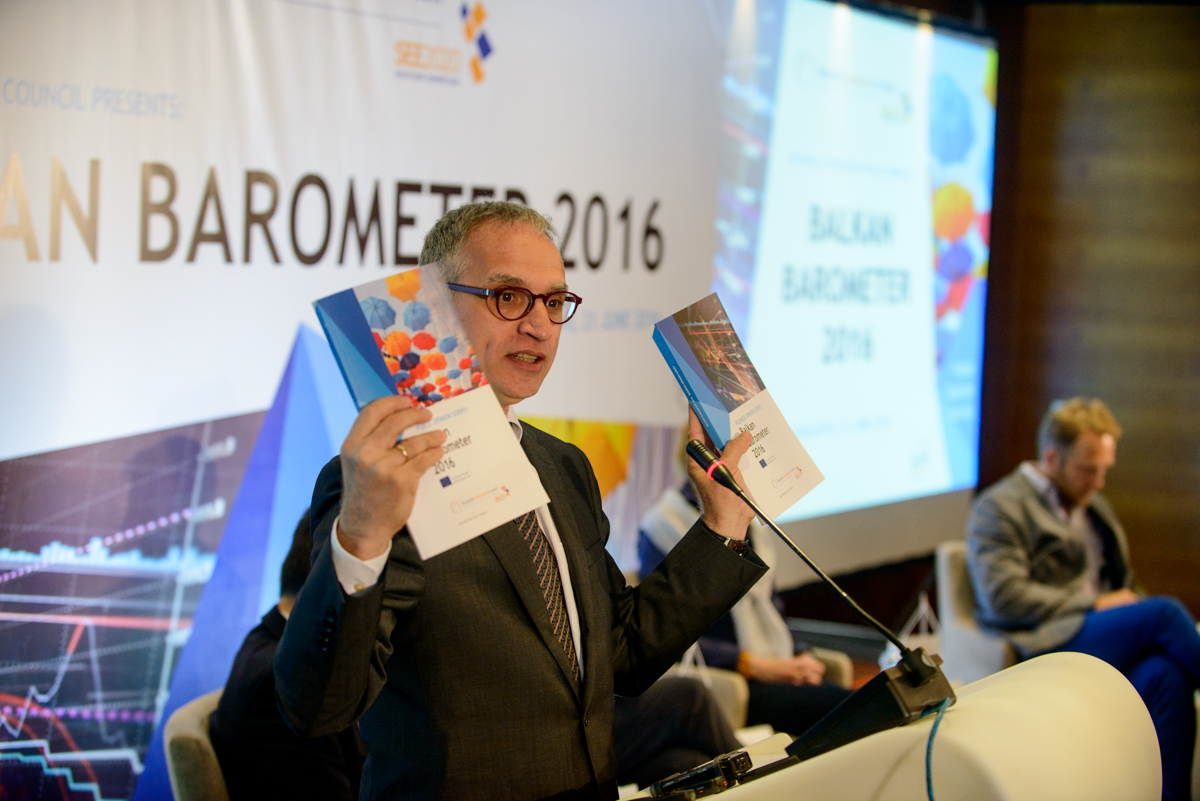 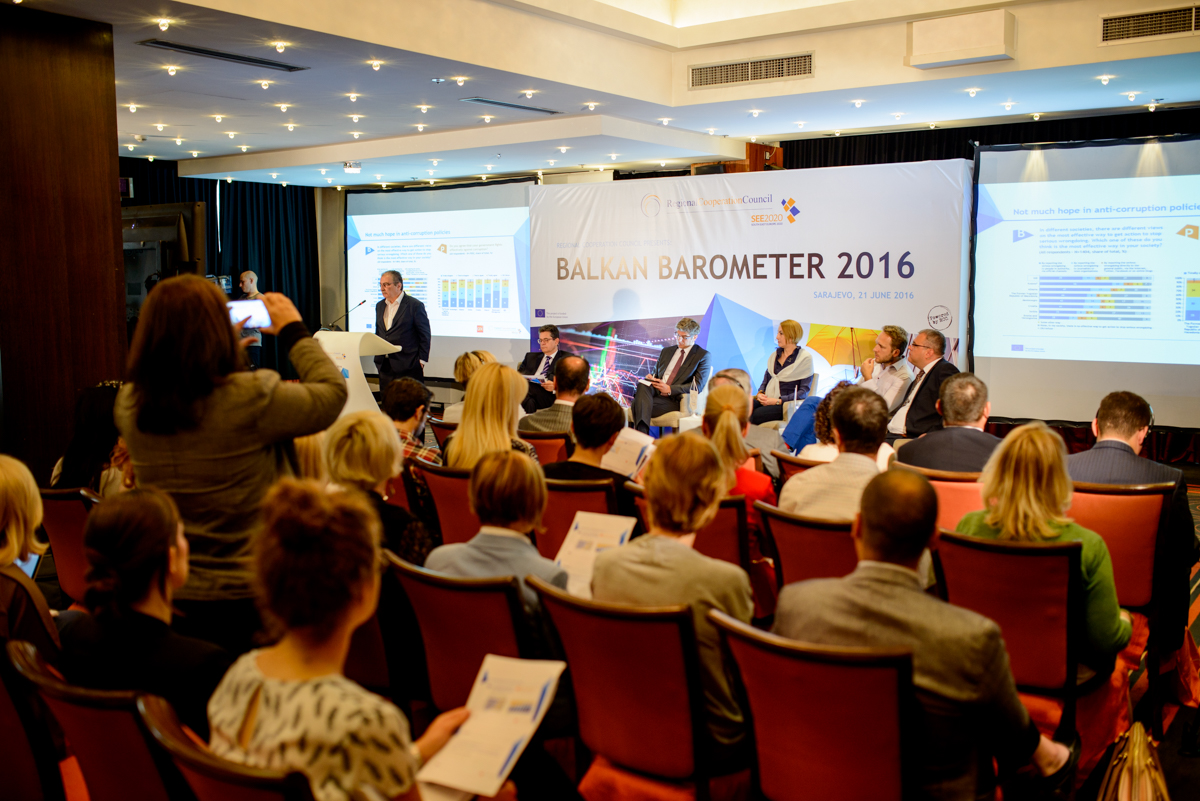 Vladimir Gligorov, GfK’s expert consultant for the Balkan Barometer and researcher at the Vienna Institute for International Economic Studies presented the key finding of the 2016 Balkan Barometer survey, in Sarajevo on 21 JUne 2016. (Photo: RCC/Amer Kapetanovic)

Although the Balkan Barometer 2016 shows the first signs of the region’s economic recovery – at least when it comes to the perceptions of citizens and businesses - the main mes­sage is very clear - there is a lot of work to be done in order to address the many important issues high­lighted by the survey, said the RCC Secretary General, Goran Svilanovic.

While the Balkan Barometer 2016 provides slightly better news when it comes to the sentiments and expectations in our region, it also reaffirms that that the main concerns of the SEE general public are unemployment, a dire economic situation and corruption, which has grown in importance for SEE, since 27% of the interviewees said corruption as one of the top problems.

“The insight which stands out the most for me in this year’s findings is that so many interviewees are willing to leave in search for a better future. Almost every other person surveyed is contemplating leaving their society and look for a job abroad”, said Svilanovic stating that this is prob­ably the worst indicator of the state of affairs in our region.

Vladimir Gligorov, GfK’s expert consultant for the Balkan Barometer and researcher at the Vienna Institute for International Economic Studies presented the key finding of the 2016 survey. He said that there is an improvement in expectations almost everywhere in the region, but also a growing dissatisfaction with politics and policies. Gligorov said that while regional integration is widely supported, there is also pessimism when it comes to EU integration. Gligorov also noted that there is “a visible disconnect between economic and social life and political goings on as and therefore a widespread crisis of legitimacy”.

The Balkan Barometer presentation was followed by a panel discussion about the overall developments and the pace of reform in the Western Balkans as well as the key priorities as seen by the region’s citizens and businesses. The panelists were Mila Kasalica, Economist and Financial Analyst from Podgorica, Vedran Dzihic, Senior Fellow at the Austrian Institute for International Affairs, Sanjin Arifagic, RCC’s SEE 2020 Coordinator and Erhan Turbedar, RCC’s Senior Political Advisor.

The Balkan Barometer is one of the annual monitoring tools used to track progress in the implementation of RCC’s SEE 2020 Strategy when it comes to growth, employment and competitiveness in the region. It is the first comprehensive effort of its kind, developed by the RCC to measure attitudes, experiences and perceptions on a range of issues, sectors and policy areas. It is also an easy-to-access source of information, containing useful statistics on the SEE economies; enabling a direct comparison with the previous year`s survey as well as an insight which can help in analysing the main socio-economic trends in the region, identifying issues and helping shape future policies .

The Balkan Barometer, published for the first time in 2015, surveys 7,000 citizens and 1,400 businesses in Albania, Bosnia and Herzegovina, Croatia, Kosovo*, Montenegro, Serbia and The Former Yugoslav Republic of Macedonia, on a wide range of issues dealing with the political, socio-economic, business and investment climate, infrastructure, rule of law and other developments in the region. This year’s survey also includes select information on Moldova and Slovenia, giving a wider overview of the South East European region. The Balkan Barometer 2016 is published in two volumes: The Public Opinion Survey, detailing the citizens’ attitudes, and the Business Opinion Survey, summarizing the business sentiments. The research and publications have been prepared and developed in cooperation between the RCC and the GfK, one of the world’s largest market research institutes.