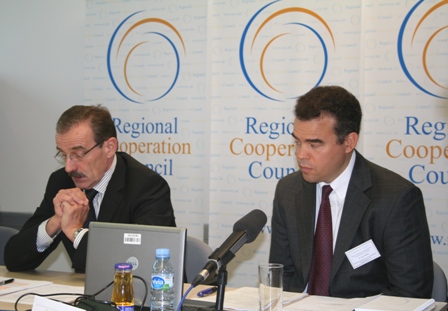 SARAJEVO – The Regional Cooperation Council (RCC) and its partner, the Organization for Economic Cooperation and Development (OECD), will tomorrow hold a kick-off meeting initiating the preparation of the Southeast Europe Investment Reform Index 2009 (IRI 2009), at the RCC offices in Sarajevo.

As a comprehensive tool which measures, on a comparative basis, major policy areas affecting a country’s investment environment, the IRI was first issued in 2006, providing an assessment of each Southeast European (SEE) country’s progress in areas such as anti-corruption, competition, taxation, trade policy, regulatory reform, investment promotion, and human capital development.

The IRI 2009 will conduct a fresh assessment of these policy areas and incorporate new dimensions: infrastructure for investment, the state of financial reporting and accounting, and the role of parliaments in regulatory reform. The IRI 2009 will thus provide a clear measure of progress achieved over the course of the past two years, while helping governments to prioritize reforms in areas crucial for attracting investment.

The RCC Secretary General, Hido Biscevic, and the Head of the OECD’s Private Sector Development Division, Anthony O’Sullivan, will launch the event. OECD and RCC experts will introduce the IRI 2009 toolkit to over 20 high level officials from Albania, Bosnia and Herzegovina, Bulgaria, Croatia, The Former Yugoslav Republic of Macedonia, the Republic of Moldova, Montenegro, Romania, Serbia and UNMIK/Kosovo, thus preparing regional governments for the policy assessments that will form the core of the IRI development process.

The preparation of the IRI 2009 involves extensive collaboration between OECD experts, country economic teams, and representatives of the private sector active in the region, a process to which the RCC Secretariat will lend its full support.

The Investment Reform Index is a flagship publication of the OECD Investment Compact for Southeast Europe – a programme devoted to improving the investment and business climate in SEE – which operates under the umbrella of the Regional Cooperation Council.

Journalists are invited to the kick-off meeting on Tuesday, 16 September 2008, at 10 a.m., at the premises of the RCC Secretariat in Sarajevo, Trg BiH 1/V, 71000 Sarajevo, Bosnia and Herzegovina.