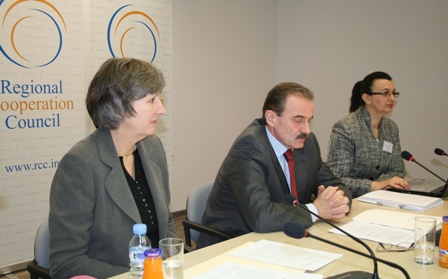 SARAJEVO – The Regional Cooperation Council (RCC) Secretariat will for the first time under its umbrella host a meeting of the Electronic South East Europe (eSEE) Initiative Working Group and the Broadband South East Europe Taskforce (bSEE), at its premises in Sarajevo, on 27 and 28 October.

The aim of the meeting, organized together with the UN Development Programme (UNDP), is to ensure synergy between these mutually reinforcing initiatives and to learn more about the status of implementation of specific components of the eSEE Agenda Plus. The Agenda Plus is the regional action plan for eGovernance and ICT development signed by nine Governments at the Regional eSEE Ministerial Conference in Sarajevo last October.

The event will be opened by the RCC Secretary General, Hido Biscevic, followed by introductory remarks by the UNDP Resident Representative and UN Resident Coordinator for Bosnia and Herzegovina, Christine McNab, and the Croatia-based Chair of the eSEE Initiative, Diana Simic.

The eSEE Agenda Plus is designed to assist the region in its efforts towards achieving the objectives of the European Union’s i2010 programme and becoming a full participant in the global Information Society. The bSEE Taskforce is working to promote regional broadband infrastructure in support of the implementation of eGovernance programmes.

This meeting will be followed by a meeting of the Programme Advisory Committee of the newly established Centre for eGovernance Development (CeGD) and the preparatory meeting of the Regional eGovernance Advisory Taskforce (REGATA) of the UNDP’s eLeadership Programme for the Western Balkans, which will aim to introduce important innovations for Southeast Europe to capitalize on the benefits of ICT use in the governance processes.

The eSEE Initiative membership includes , , , the , the of , , , and UNMIK/Kosovo. In addition to the eSEE members, the bSEE Taskforce also includes Greece.

Journalists are invited to attend the opening of the meeting on Monday, 27 October 2008, at 10 a.m., at the premises of the RCC Secretariat in Sarajevo, Trg BiH 1/V, 71000 Sarajevo, Bosnia and Herzegovina.