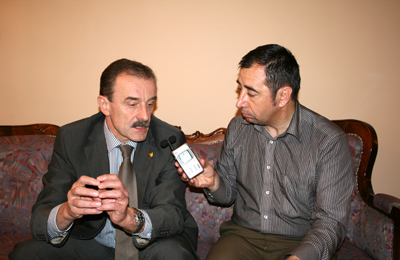 CHISINAU/SARAJEVO – The first Annual Meeting of the Regional Cooperation Council (RCC), held in Chisinau today, endorsed the RCC Secretary General’s Annual Report on regional co-operation in SEE and the 2009-2010 Strategic Work Programme of the organization.

The Meeting, co-hosted by the Moldovan Chairmanship-in-Office (CiO) of the South-East European Cooperation Process (SEECP), discussed regional cooperation in South East Europe (SEE) over the past year, results achieved in the first year of the RCC operation, and challenges ahead, including the ways of addressing the effects of the current global economic crisis in SEE.

“Since its emergence in February 2008, the RCC has focused on fostering economic and social progress in SEE, further promotion of democratic values and reforms, and support to the realization of the European and Euro-Atlantic aspirations of all its members”, said Hido Biscevic, the organization’s Secretary General. “In addition, the RCC has worked on the consolidation of institutional dialogue with EU institutions, promotion of SEE as a reliable partner on the international arena, and consolidation of genuine cooperation in the region.”

“The regional cooperation and ownership efforts by the RCC and its Secretariat gained full support from the highest political levels. At the same time, the RCC profiled itself as a key interlocutor of the EU and the broader international community for matters of regional cooperation in South East Europe.”

The RCC-launched process of networking among the RCC members from South East Europe, the European Commission and international financial institutions resulted in the identification of projects ideas on the part of RCC members from SEE. In May, an RCC Project Portfolio, containing 22 Preliminary Project Ideas, was submitted to the Commission for possible financing under the Multi-beneficiary Instrument for Pre-accession Assistance (IPA) 2010.

Moreover, a conference on the development perspective of the Western Balkans, to be organized by the incoming Swedish Presidency of the EU Council and the European Commission, in Brussels in December 2009, with RCC involvement, will address impacts of the financial crisis on the region, progress of the enlargement process, as well as regional cooperation, with particular emphasis on promoting trans-regional projects in energy, transport and infrastructure sectors.

The RCC Annual Meeting is held back to back with the SEECP Summit. It is co-chaired by the Secretary General and the Foreign Minister of the SEECP CiO, and meets at the level of senior civil servants or above. The Annual Meeting ensures the strategic co-ordination and development of the regional co-operation processes, reviews and endorses the Secretary General’s Annual Report on regional co-operation in SEE as well as the Strategic Work Programme for the following year.