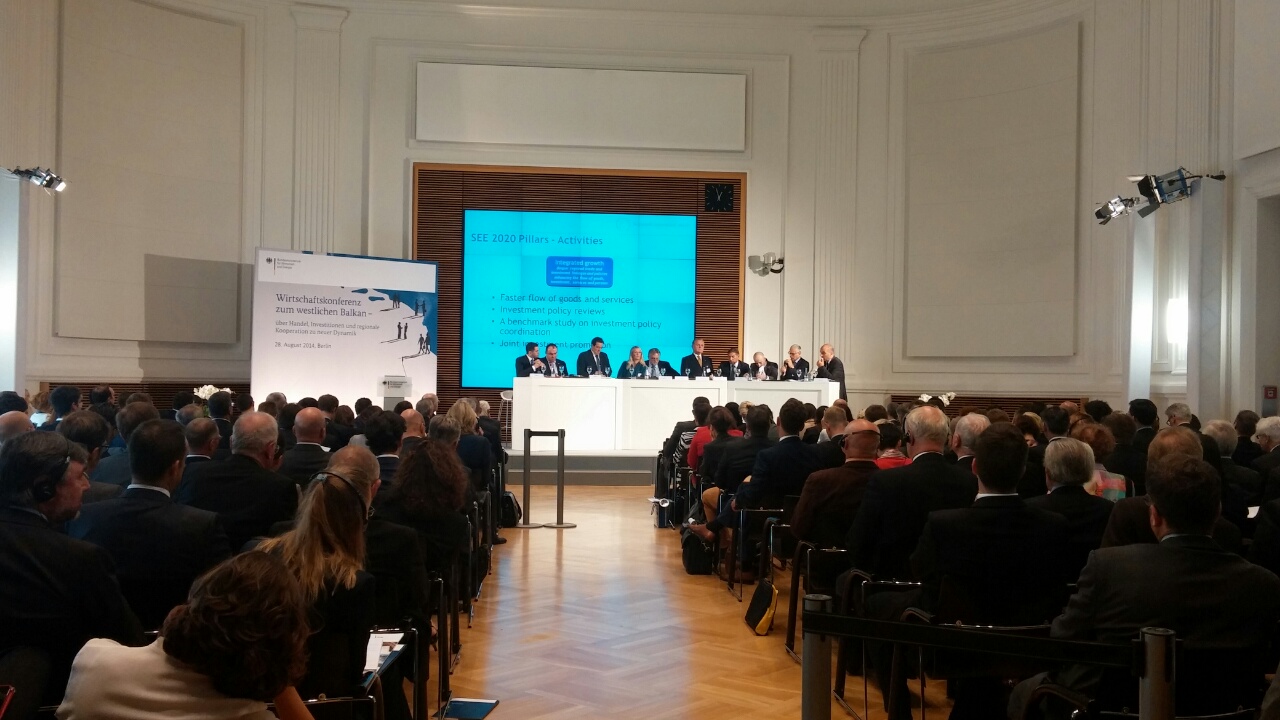 BERLIN – At the initiative of German Chancellor Angela Merkel and hosted by Vice Chancellor and Minister for Economic Affairs and Energy, Sigmar Gabriel,  a discussion on economic potentials and prospects of the Western Balkans kicked off the Western Balkans summit in Berlin. The main motto of this conference was “Through trade, investment and regional cooperation to new dynamics” and it was co-hosted by the Association of German Chambers of Industry and Commerce. The conference brought together ministers of Economy or Finance from Albania, Bosnia and Herzegovina, Montenegro, Croatia, Kosovo*, Former Yugoslav Republic of Macedonia, Slovenia and Serbia.

RCC Secretary General, Goran Svilanovic, took part in the panel session “Promotion of employment, medium-sized businesses and investments” and took the opportunity to emphasise the need of the SEE economies to go beyond national borders and to incorporate the energies of both government and private sector in order to achieve an economic recovery. Mr Svilanovic said that “we urgently need long term socio-economic reforms which could provide a safe and predictable environment for doing business”. He presented the common vision of the region’s Ministers – the increase of economic competitiveness and job creation – which is the cornerstone of the common SEE 2020 Strategy – Jobs and Prosperity in European Perspective adopted in November 2013 and now in its implementation phase. Svilanovic told the Berlin conference about the main goals and mechanisms of the Strategy which plans to boost the GDP, to increase mutual trade and foreign direct investment as well as create more jobs.

Referring to the Strategy’s five development pillars, Mr. Svilanovic focused on the economy, job creation and good economic governance emphasizing that these economies need to remove trade barriers, jointly promote the region to foreign investors, fund shared research programs, develop common energy and transport infrastructure, enable the mobility of workers across the Balkans and improve services and create a stable environment for doing business. He concluded by saying it is of crucial importance to enhance coordination, cooperation and communication among regional governments, organizations and the private sector. “The region has a great deal to offer to the foreign investment community and better cooperation among all of the involved stakeholders, will benefit everyone”, Svilanovic said.

* This designation is without prejudice to position or status and is in line with UNSCR 1244 and the ICJ Opinion on the Kosovo declaration of independence.