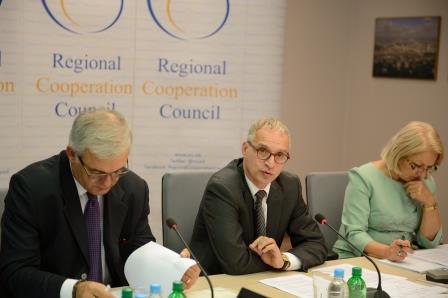 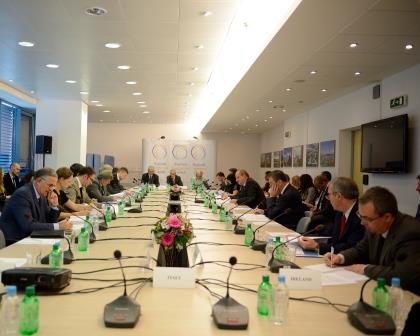 Sarajevo – At the third meeting of the RCC Board this year the RCC Secretary General, Goran Svilanovic, presented a number of activities of the RCC Secretariat in the period April – September 2014 and informed the Board on the most important future activities, especially those related to the implementation of the RCC Strategy and Work Programme 2014-16 and its central pillar: the SEE 2020 Strategy.

Mr. Svilanovic highlighted the synergy between the RCC and the Albanian Southeast European Cooperation Process Chairmanship-in-Office (SEECP C-i-O) that has an indispensable role in coordinating regional activities in SEE, saying “we explored the areas where joint action can be undertaken and in which ways can the RCC effectively support the C-i-O.”

Today’s meeting was also an opportunity to present the conclusions of numerous conferences that took place in the reporting period, especially the RCC participation at the high-level Conference on Western Balkans on 28 August in Berlin where the Final Declaration underlined the crucial role of the RCC in intensifying regional cooperation as an essential basis for stability in the region.

The Secretary General also referred to specific efforts undertaken by the Western Balkans economies to enhance mutual cooperation in the EU accession process and seize the opportunities offered by the existing EU policies and financial instruments. These positive developments have been recognized and supported in the latest EC Enlargement Strategy 2014 - 2015 of 8 October 2014, in which the work of SEECP and RCC is fully supported.

The second part of the meeting focused on presenting the next phase of the SEE 2020 Strategy and briefing the Board on the main developments regarding the SEE 2020 framework and the progress made since the last meeting of the Strategy’s Governing Board in June.

The Head of SEE 2020 Strategy Coordination Unit, Sanjin Arifagic, spoke about the projects being planned in the SEE 2020 context, with a total value which is expected in a vicinity of EUR 17 million.

The Board was also informed about the importance of the justice and home affairs in the RCC SWP for 2014 – 2016, highlighting the need of addressing the main barriers at the regional level and EU enlargement process. Therefore, one of RCC’s priorities in the forthcoming period will be enhancing regional cooperation in combating serious and organized crime, fighting corruption and boosting integrity in public administrations.

The next meeting of the RCC Board is expected to take place in February next year.

Report on the activities of the RCC Secretariat_April_September_2014