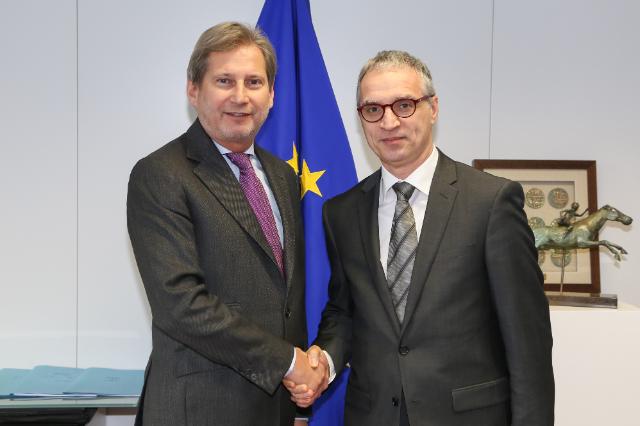 The European Commission will continue to strongly support the activities of the Regional Cooperation Council (RCC) to enhance regional cooperation and promote European integration in South East Europe (SEE). This was confirmed during constructive meeting between RCC Secretary General Goran Svilanovic and the Commissioner for the European Neighbourhood Policy and Enlargement Negotiations, Johannes Hahn, held in Brussels on 5 February 2015.

Mr. Svilanovic and Mr. Hahn discussed the future activities of the RCC on fostering bilateral and multilateral relations in the region, closely linked with the enlargement strategy, the Berlin process, economic governance and connectivity, with a special focus on the implementation of the regional growth strategy SEE 2020, which aims to create jobs and prosperity in SEE.

Svilanovic thanked the Commissioner for all the support so far and stressed that the region was moving forward with the implementation of the SEE 2020 Strategy.

Commissioner Hahn reiterated the European Commission’s commitment to continue supporting the work of the RCC, highlighting that regional cooperation is a key step for assisting bilaterally and multilaterally the region’s economies on their EU path.

This was the first  meeting between the Commissioner and RCC Secretary General since Johannes Hahn assumed the post of European Commissioner for European Neighbourhood Policy and Enlargement Negotiations in November 2014.