Better cooperation between the RCC and the OSCE 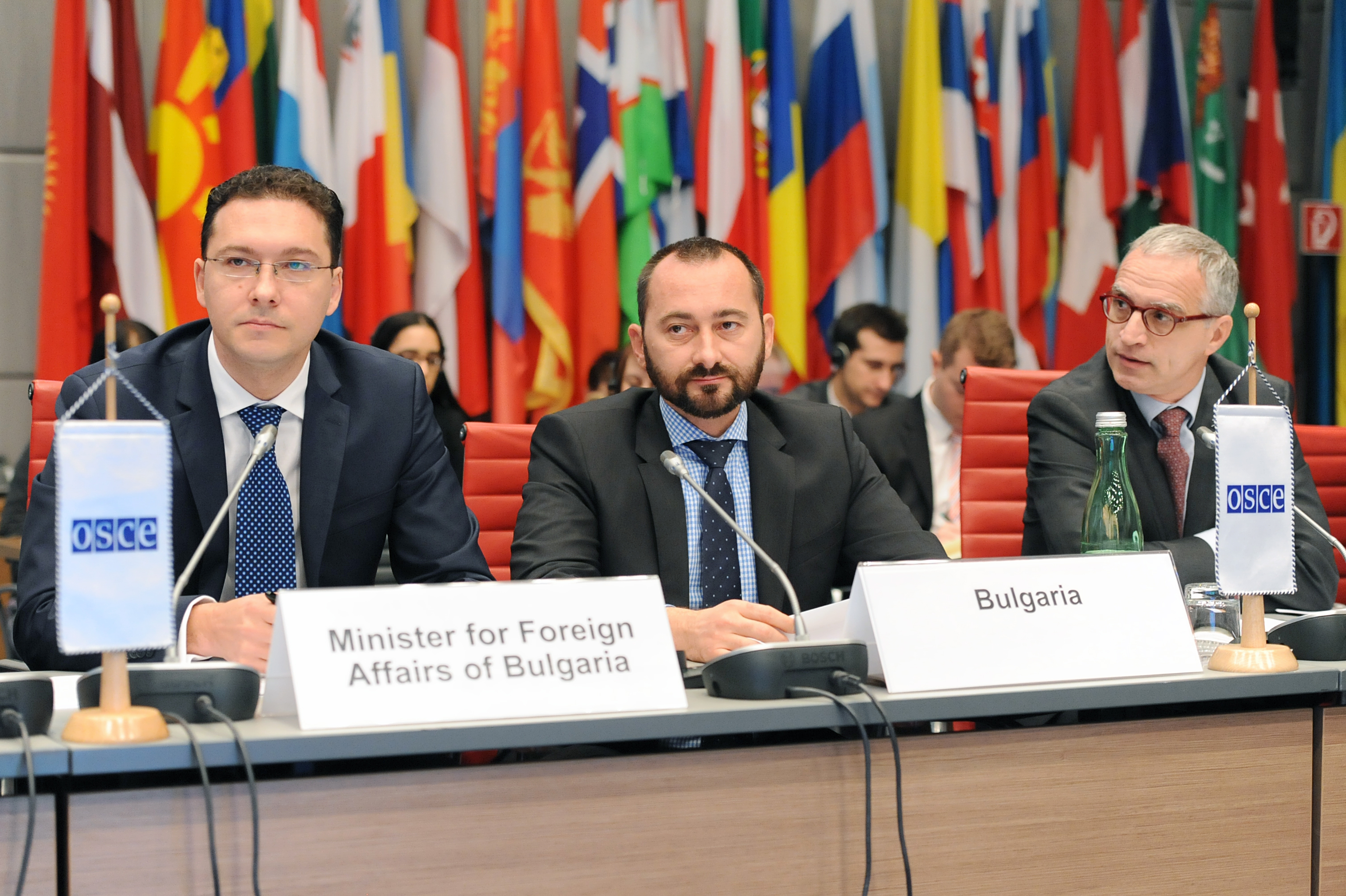 RCC Secretary General Goran Svilanovic (first on the right) and SEECP Chair in Office, represented by the Bulgarian Foreign Minister, Daniel Mitov at the meeting of the OSCE Permanent Council in Vienna (Photo: OSCE/Micky Kröll)

Vienna/Sarajevo, 29 October 2015 - Ways and means for better cooperation between the Organisation for Security and Cooperation in Europe (OSCE) and the Regional Cooperation Council (RCC) were discussed today at a meeting of the OSCE Permanent Council in Vienna. This was the first time that the RCC was addressing the Permanent Council jointly with the South-East European Cooperation Process Chair in Office, represented by the Bulgarian Foreign Minister, Daniel Mitov.

The RCC Secretary General spoke at length about the current activities of the Regional Cooperation Council with a special emphasis on the priorities which can lead to greater regional ownership and especially growth, competitiveness and employment with the rule of law and security as pillars of prosperous societies. Mr Svilanovic said that the RCC is committed to boosting inclusiveness, responsiveness, efficiency and fairness in good governance as a crucial element for economic growth. “We have focused on the improvement of effective public services, building institutional capacities on anticorruption in SEE, and regional cooperation in the area of justice.” He also emphasised the importance of justice and home affairs especially when related to the fight against serious and organised crime, strengthening police and judicial cooperation in criminal matters, and migration management issues.

Climate change was another crucial point since South East Europe is vulnerable to climate change - as vividly illustrated by catastrophic floods last year in Bosnia and Herzegovina and Serbia. “Given the geographic and economic interconnections in SEE, said Svilanovic, “the RCC has focused on providing a concerted regional approach towards climate resilient growth, ensuring greater gains than the ones that unilateral interventions can offer on the national level. Functioning and effective green growth policies are firmly embedded in RCC’s SEE 2020 Strategy, and can both increase assets and jobs, and also help to meet EU environment and climate requirements”.

RCC Secretary General also presented the organisation’s work in the security policy area, especially the efforts to develop the Regional Platform for Countering Radicalization and Violent Extremism which is being formed under the political umbrella of the SEECP and in close coordination with the EU and the USA. This platform will map the current anti-radicalization efforts and develop a Matrix of Counter Terrorism activities in the region; establish a regional web platform on counter-terrorism hosted and maintained by the RCC; develop radicalization monitoring tools and also strengthen cooperation between prosecutors and law enforcement in the region.

Today was the first such presentation of RCC activities to the OSCE Permanent Council since 2013 and is a part of the regular practice of presenting RCC’s activities to international organisations.
Secretary GeneralPolitical