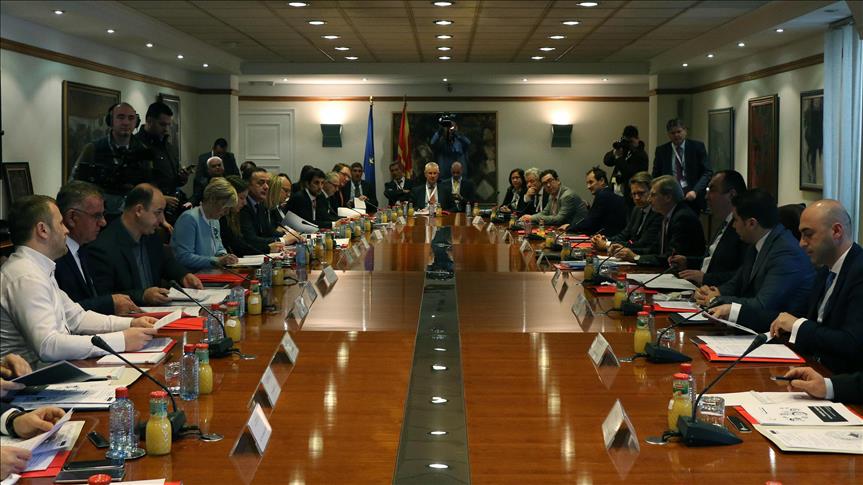 RCC took part in the meeting of ministers of foreign affairs of the Western Balkans six in Skopje on 9 February 2017. (photo: Anadolu Agency)

Svilanovic: RCC to contribute making the region prosperous and stable
SKOPJE/SARAJEVO, 9 February 2017 – “It is of paramount importance to ensure further progress and reforms in the region, as they are irreversible processes triggered by the EU accession aspirations. Regional Cooperation Council (RCC) is looking forward to continuation of close cooperation with you in making this region prosperous and stable,” said RCC Secretary General Goran Svilanovic, addressing the Western Balkans six (WB6) ministers of foreign affairs in Skopje today.
The meeting participants – foreign ministers from the region, European Commissioner for European Neighbourhood Policy and Enlargement Negotiations Johannes Hahn, Italian Undersecretary of State for Foreign Affairs Vincenzo Amendola and RCC Secretary General – exchanged views on the situation in the region and the Berlin Process, focusing on the prospects and possible deliverables for the 2017 Trieste Summit as well as on the future of the Berlin Process after 2018, and the potential of WB6 format discussions.
“Expectations from the upcoming Trieste Western Balkans Summit are very high.  Connectivity, anticorruption, innovation and technology transfer, which are some of the topics of the Summit, if approached adequately at both, national and regional levels, can greatly contribute to sustainable economic development, but also boost the enlargement process for the Western Balkans,” said Svilanovic.
Underlying the crucial importance of the Berlin Process for the region, Deputy Prime Minister and Foreign Minister of The Former Yugoslav Republic of Macedonia, Nikola Poposki, said he welcomes continued EU focus on connectivity as one of the means to achieve progress and further advance in the EU integration process.
Commissioner Hahn emphasized that the European Union has an interest for further integration of the region into the EU, and therefore will provide support for number of regional projects as better connectivity provides for political stability of the region.
Svilanovic shared organisation’s priorities and activities envisaged for the next three years, but also reminded of the RCC earlier successes in brokering an inter-governmental agreement  to prioritize mutual recognition of professional qualifications in construction and health sectors; preparing  and agreeing on regional tourism programme, currently under consideration  for EU funding;  managing to carve out a clear role for the RCC  to directly support the Chapter 23&24 reforms; and  the  RCC-commissioned independent market impact assessment revealing that the regional roaming agreement has already produced reduction in roaming costs for over 30% ranging up to 80%.
On the sidelines of the meeting agreements ensuring additional EU contribution in providing technical assistance and financing projects in the area of energy efficiency and renewable energy sources in our region, have been signed.
This meeting is a follow-up of the WB Six Ministerial meeting held last September in New York on the margins of the 71st Session of the UN General Assembly.
Secretary GeneralPolitical