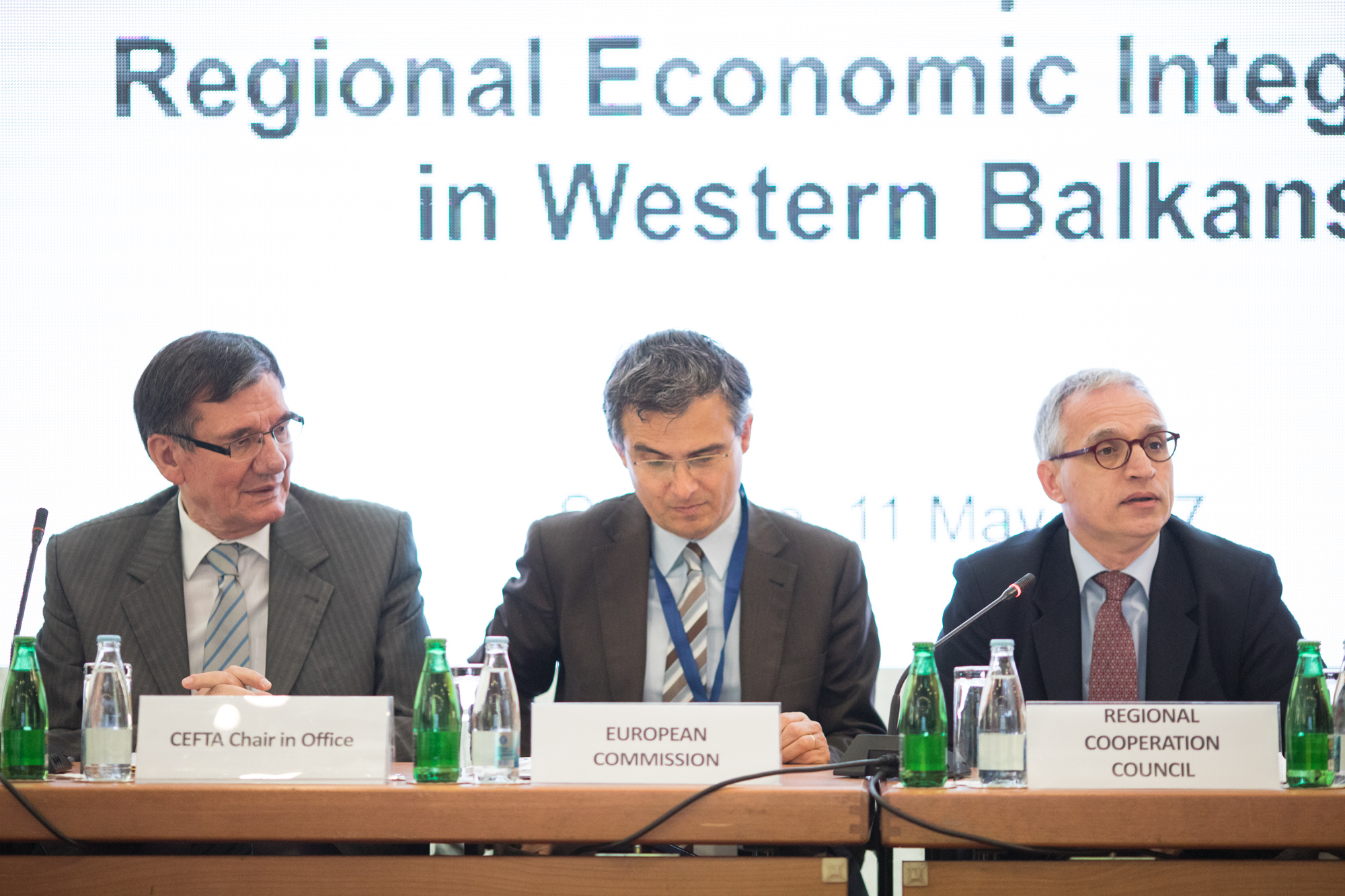 Workshop on Regional Economic Integration in Western Balkans, co-organized by the RCC, EC, and CEFTA, took place on 11 May 2017 in Sarajevo, BiH (Photo: RCC/Haris Calkic)

Sarajevo – Representatives of the Western Balkan (WB) six economies coming from ministries in charge of labour, education, trade, investments, digital agenda, foreign affairs as well as representatives of prime ministers gathered in Sarajevo today to identify joint economic integration initiatives and priority areas that could be presented at the Western Balkans Summit in Trieste, Italy on 12 July 2017.

Goran Svilanovic, RCC Secretary General highlighted both the importance and the complexity of the expected outcome of the Workshop. While addressing the participants of the Workshop, Svilanovic underlined that the present challenges including different EU accession progress stages in the Western Balkans, political backgrounds and the scope of topics to be examined at the meeting, could be seen as opportunities to come up with the core idea in which regional economic cooperation could be advanced to lead the region closer to the EU and also to better economic situation and prosperity of each participant.

“There is no doubt that the priorities of our region should drive and shape the process, determine its dynamics and format. The successful reduction of roaming prices, the progress in trade and transport facilitation, the growing regional networking among the private sector, the work towards building a regional touristic offer, etc. are among the many areas which prove there is an added value in the joint regional efforts. The level of your readiness and ambition will determine the format and commitments of the Trieste Summit Conclusions”, said Svilanovic, stressing RCC’s readiness to provide expertise and convening capacity to prepare an action plan that can indeed facilitate mobilization of efforts and secure high level political buy-in.

The meeting is a follow-up to meeting of the six Prime Ministers of Western Balkans in Sarajevo on 16 March 2017,   where they reaffirmed their commitments and set out guidelines on preparations for the 2017 Summit hosted by Italy, recognising the need to bundle the strengths as a region.

Bernard Brunet, Head of Unit at EC’s DG NEAR, said that the European Commission very much supports efforts by the six Western Balkans economies to deepen regional economic integration.

“This could include circulation of goods, services and capital, free flow of skilled workforce, a common digital approach and a dynamic investment space, as they are all important cornerstones of the EU accession process. European Commission hopes that ambitious action plan will be adopted at the upcoming Trieste Summit.”

By joining CEFTA ten years ago, the Western Balkans region benefited a lot, said Stanimir Vukicevic, Ambassador of Serbia, CEFTA Char in Office, to Bosnia and Herzegovina, adding that there was still a lot of room for improvement as the intra-regional trade flows hadn’t grown enough.

“To that end we at CEFTA hope that this cycle of boosted regional cooperation efforts would result in swift implementation of the additional protocols on trade facilitation and liberalisation of trade in services, as the CEFTA market represents a serious pool of around 20 million consumers.”

The 2016 Paris Summit provided an important road map to further strengthen regional cooperation, increase coherence and deepen integration driven by a clear EU accession perspective. The upcoming Trieste Summit is to build on the progress made leading towards regional economic integration to step up EU accession process.

This technical workshop, envisaged as a preparatory step towards high level meetings that are to follow prior the Trieste Summit, was organized and supported by the Regional Cooperation Council (RCC), Central European Free Trade Association (CEFTA) and European Commission (EC).