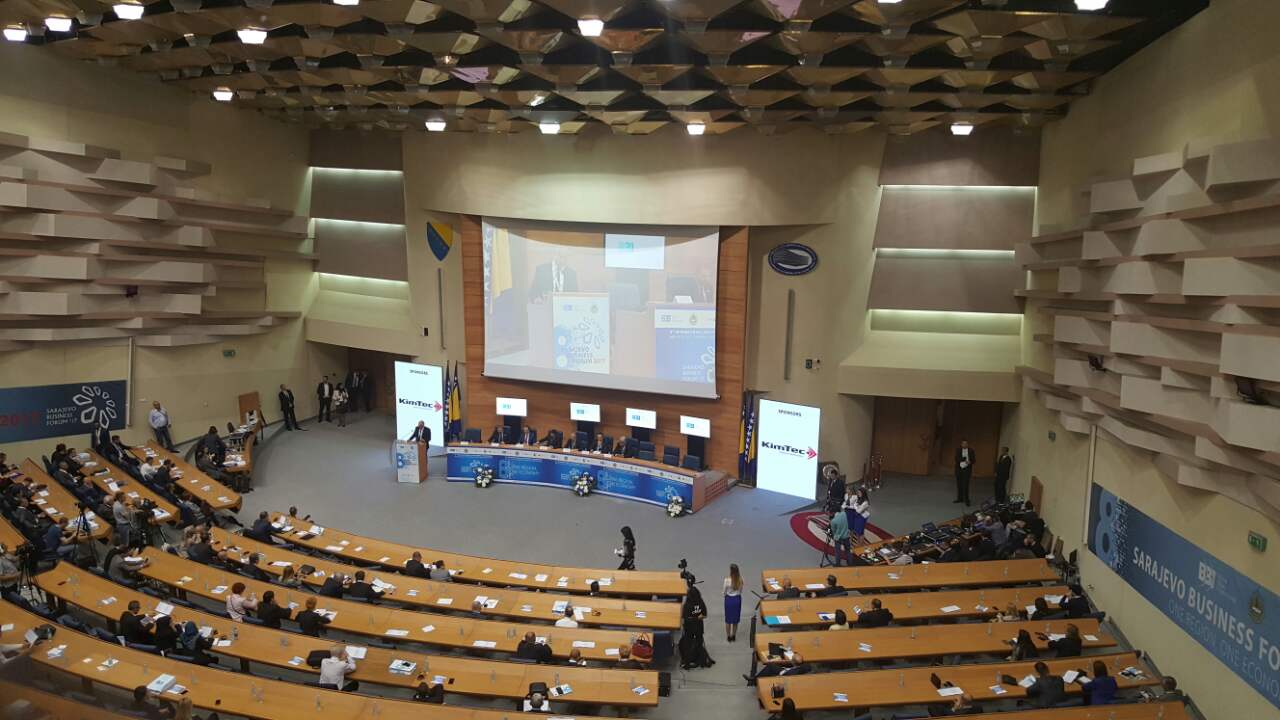 RCC hosted a panel "One Region, One Economy - Connectivity and Potential" at Sarajevo Business Forum 2017 on 22 May 2017. (Photo:RCC/Ratka Babic)

Sarajevo – The Regional Cooperation Council (RCC) hosted a panel "One Region, One Economy - Connectivity and Potential" at Sarajevo Business Forum 2017 (SBF 2017) today. This year’s edition of the SBF 2017 is being co-organized by the RCC.

The panel participants all agreed on a necessity for concrete and accelerated action in regional cooperation leading towards increase in investments, connectivity, competitiveness and overall economic growth. One of the keynote speakers at the panel, Stjepan Mesić, Former President of Croatia, underlined that small regional economies can do a lot, but cannot change the sizes of their markets. “SEE cannot afford to remain passive to international economic changes,” Mesic said, adding that they must reinforce their competitiveness by improving their infrastructure and logistics. “The EU association process is more important than the membership itself. The region must do more on cooperation and integration.”

Danilo Türk, Former President of Slovenia, in his keynote speech, advocated the stance of networking on wider scale, not limiting ourselves only to the connectivity concept in SEE, but considering other, surrounding regions. He added that the EU today understood that the way forward was through small steps and possibly delaying important political decisions, allowing economies to grow, being less burdened by the politics.

Jyrki Katainen, Vice-President of the European Commission, in his video address to the forum, said that they were looking forward to the Trieste Western Balkans Summit in July when regional leaders would confirm their wish to move towards regional economic area and announce concrete steps to be taken in the coming years. “This will finally deliver on your motto for a single investment destination, one region one economy.”

The One Region, One Economy panel also included Ismir Jusko, Minister of Communication and Transport of  Bosnia and Herzegovina; Morten Jung, EC’s Senior Advisor for Western Balkans Regional Cooperation; Edin Zećirović, State Secretary at Serbian Ministry of Civil Engineering, Transport and Infrastructure; and Ian Brown, Head of BiH Office of the European Bank for Reconstruction and Development , Bosnia and Herzegovina.

This 8th edition of the SBF hosts heads of states and governments, ministers, CEO’s of global companies, investment funds managers, heads of international organizations and media representatives. The Forum gathers about 1,600 participants from over 30 countries, and around 350 representatives of local and foreign media.

Sarajevo Business Forum is regional investment conference successfully implemented for the past seven years. The main objective is to attract foreign investors to the South East Europe by presenting investment potentials of the region, natural resources, skilled labour and the prospects of European integration.