Training of junior diplomats from South East Europe: crafting the future of the region 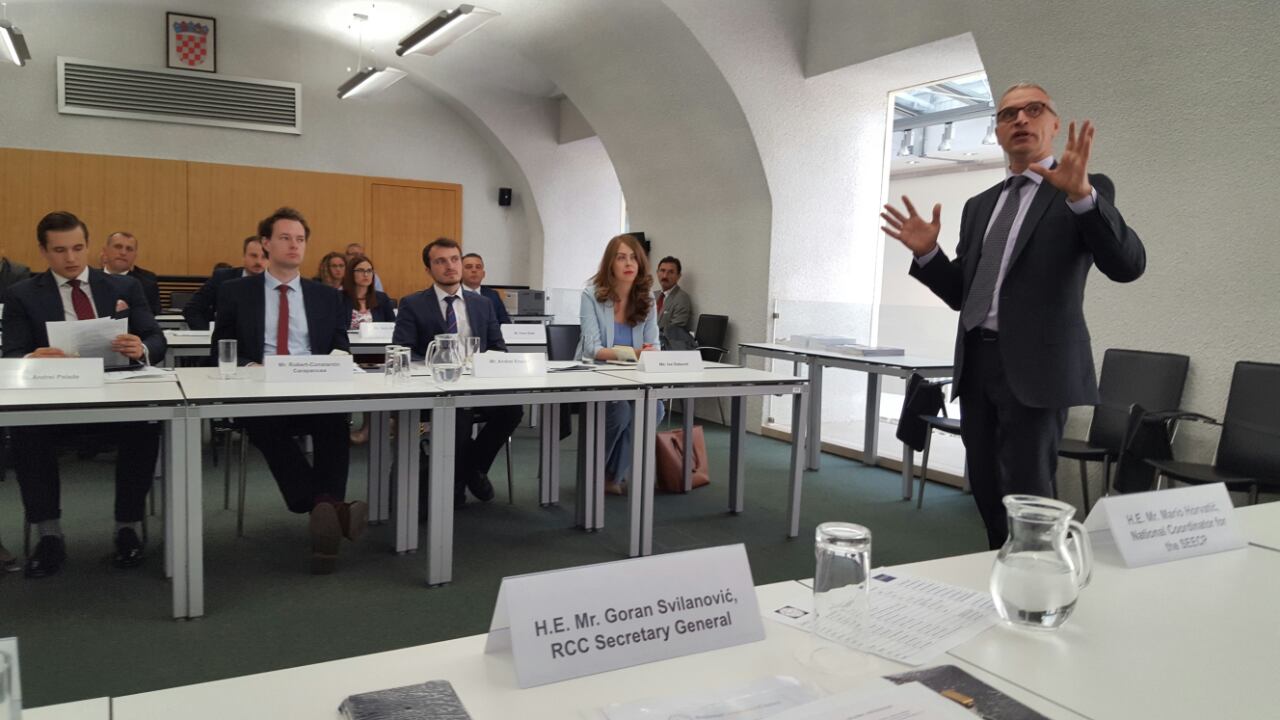 Zagreb – Goran Svilanovic, Secretary General of the Regional Cooperation Council (RCC) together with the host, Tomislav Lendic, Croatian Assistant Minister of Foreign and European Affairs (MFEA) in charge of Southeast Europe opened the 1st South-East European Cooperation Process (SEECP) Seminar for Junior Diplomats taking place in Zagreb from 11 – 15 June 2107.
Stressing the importance of regional cooperation Secretary General Svilanovic underlined that this is one of the instruments that provides added value in overcoming socioeconomic and other common challenges, and a pre-requisite to the EU accession, as it contributes to good neighbourly relations, stability and security.
Croatian Assistant Minister Lendic thanked the RCC for the initiative and welcomed junior diplomats to the training event expressing the hope that they would gain new insights and understanding of processes of regional cooperation in SEE as well as on European perspectives and interactions.
“There are a certainly many lessons to be learned from the Croatian experience in the EU accession process. These are all relevant experiences that could assist other region’s economies on their way to the EU and we are willing to share them with our neighbours in their path towards the EU.”
Ambassador Mario Horvatic, the SEECP C-i-O Coordinator presented the objectives and priorities of the Croatian SEECP C-i-O and the expected outcomes of the SEECP – RCC high-level events to be held in Dubrovnik at the end of June. He reflected on SEECP’s role and its main achievements in “building peace, confidence, and good neighbourly relations in our region”.
Presenting the role of the RCC in European architecture and the RCC’s mission in assisting and facilitating the European and Euro-Atlantic integration process of SEE,  Svilanovic pointed out that the regional cooperation in SEE has proven ability to adapt to the evolving needs of the region, where the RCC has a lead role in devising cooperation instruments, prioritizing areas of cooperation, ensuring that the political support and available resources are better channelled into promotion and implementation of needed reforms on the region’s way forward. Svilanovic also elaborated on recent regional developments and the political initiatives aimed at furthering economic cooperation in the WB and boosting the ongoing reform processes in the EU accession economies and the “RCC’s engagement in shaping a regional economic area in SEE”.
During the 4-day event the region’s junior diplomats will have an opportunity to discuss and actively take part in workshops on many topic pertaining to current diplomatic practices and developments: The EU in the World – Institutions and Interaction; State of Play on Integration and Relationship with the EU, Relations of Member States within the EU;   Communicating in the EU Context; Streamlining the Coordination: Role of Foreign Ministries in the Pre-accession Process;  Coordination of EU Affairs from a perspective of the member state; Lessons Learned from Croatia’s Accession to the EU and Croatia’s Experience in Fostering the Rule of Law by Negotiating with the EU and the country’s preparation for the EU Presidency 2020.
Numerous seminar speakers include representatives from ministries of foreign affairs coming from the host and current SEECP Chairmanship-in-Office – Croatia and other South East European economies, European External Action Service (EEAS) and European Commission.
The Seminar for junior diplomats, first of the kind within the SEECP framework, was organised by the Diplomatic Academy of Croatian MFEA and RCC. It gathers junior diplomas from the region.
PoliticalSEECP