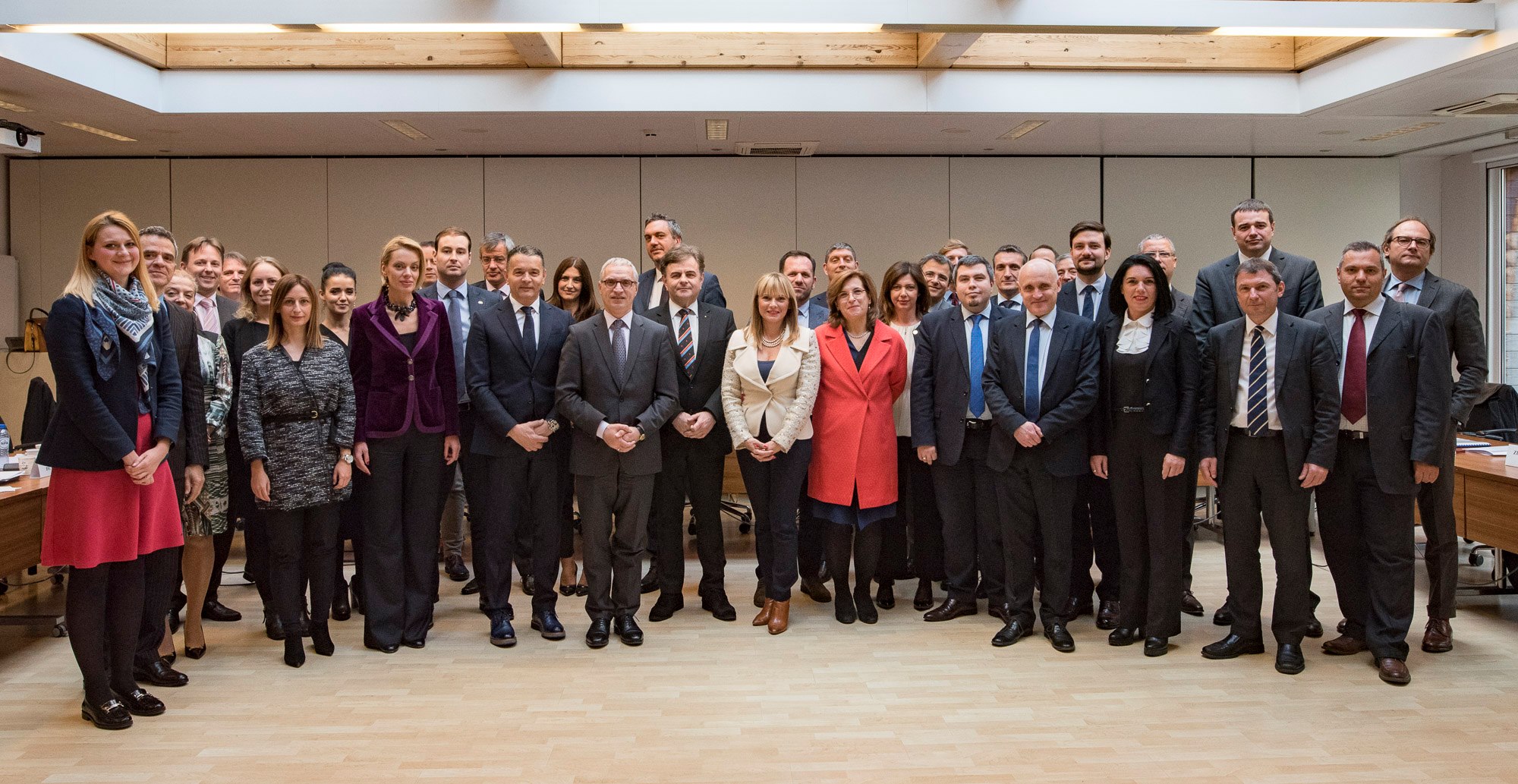 Participants of the first Meeting of MAP Coordinators, held in Brussels on 31 October 2017. (Photo: RCC/Jerome Hubert)

Brussels - Following the Trieste Western Balkans (WB) Summit and the endorsement of the RCC’s Multi Action Plan (MAP) for a Regional Economic Area (REA) in the WB6, the Regional Cooperation Council (RCC) and the Western Balkans Chamber Investment Forum (CIF), organized the first Meeting of the MAP coordinators that ended in Brussels today.

When it comes to implementation of MAP Svilanovic underlined that RCC’s next steps are to facilitate the negotiations on mutual recognition processes on professional and academic qualifications; drive forward the work on a single roaming space, aligned with EU’s model; co-organise an ambitious Digital Summit together with the German Government, EC,  and host Government; work to build consensus around regional investment reform agenda and develop a joint regional investment promotion initiative, with a focused set of investment outreach activities.

MAP coordinators representing the WB governments, together with representatives of the RCC, EU, CEFTA, CIF, The World Bank, and the EBRD reviewed progress on MAP measures which took place since the Summit until today.

The participants took note of the Guidelines developed by the RCC and CEFTA Secretariat, relating to monitoring and reporting on the MAP REA implementation, to ensure efficient management of the MAP process. According to the Guidelines the national governments involved in the implementation process through MAP Coordinators and Component Contact Points will be feeding back their results to the RCC Secretariat, who will be in charge of preparing the MAP REA implementation reports.

Marko Cadez, President of the Managing Board of WB6 Chamber Investment Forum (CIF) said that considerable growth potential of the region can be unleashed through closer economic integration, adding that in period between Trieste and London Summits progress in European integration would be used to both create additional space for economic cooperation in the region and unlock potential dwelling in the unnecessary impediments to trade and investments in the region. “Our joint aim is to transform our Region in which goods, services, investments, and skilled people move freely without tariffs, quotas or other unnecessary impediments, where trade is facilitated higher than World Trade Organisation Rules.”

On the operational side, the WB6 MAP Coordinators presented their programmes, activities and plans for MAP implementation to the end of this year and onwards in 2018. This created a framework of timelines, required stakeholder interventions and expected deliverables for the entire region, which is an important step in coordination and synergizing efforts towards efficient achievement of the MAP objectives.

Bernard Brunet, Head of Unit at the European Commission’s DG NEAR, concluded that there is a necessity to equip MAP coordinators with a solid overview of the wider picture and help them as much as possible, adding that the Commission was fully aware of the burdens region’s administrations are facing and the ambition of the different reform agendas to be undertaken.

“It is your MAP but you can count on EU’s support. The Commission, the RCC, CEFTA, and others, will continue to facilitate the horizontal processes related to MAP so that you can really focus on its implementation and deliverables. There is a need for increase of national efforts on REA. EU stays committed to MAP, expecting clear results by the end of the year.”

The meeting was followed by the business-to-government (B2G) meeting, aiming to maximize the MAP benefits and its implementation inclusiveness through structured dialogue with private sector, bringing for the first time together the MAP coordinators and the WB6 CIF Managing Board.