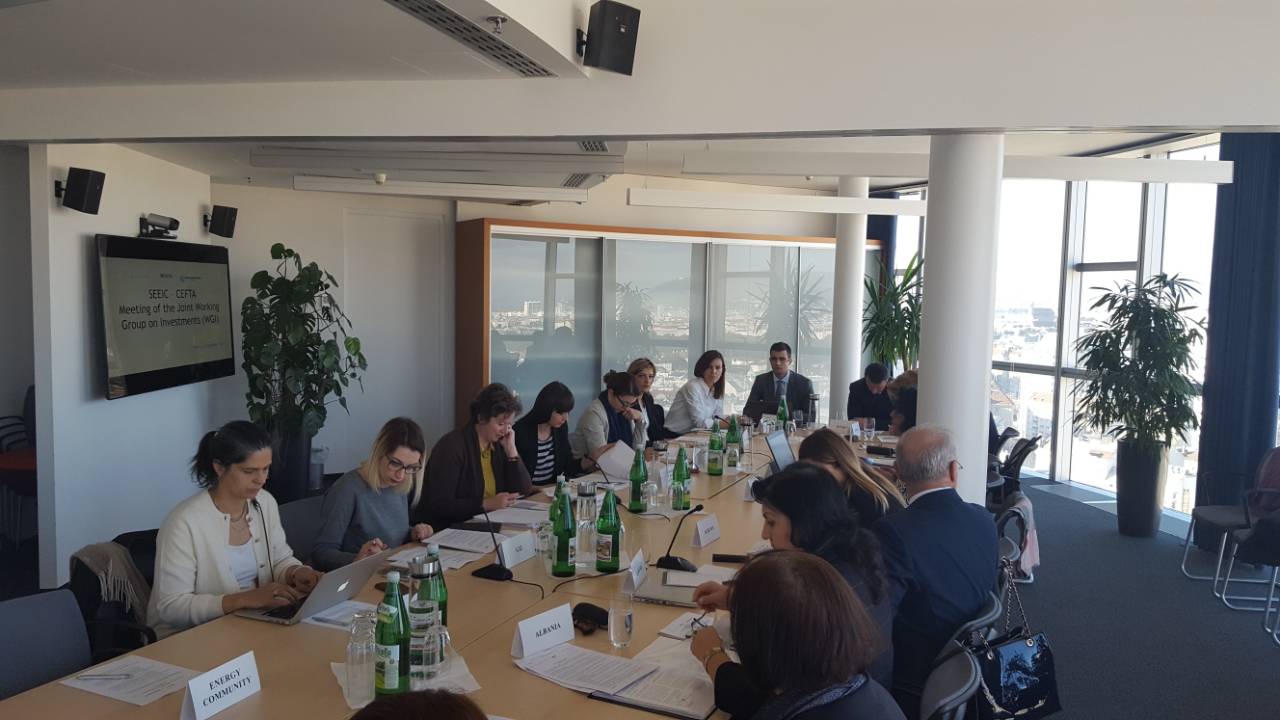 Vienna - The Western Balkans Six (WB6) Multi-Action Plan (MAP) for Regional Economic Area (REA) in the area of investments’ policy reform was in the focus of the regular meeting of SEEIC-CEFTA Joint Working Group on Investments (WGI), organized by the Regional Cooperation Council (RCC) in Vienna today.

Welcoming the participants on behalf of the RCC, Maja Handjiska Trendafilova, the South East Europe (SEE) 2020 Strategy Coordinator briefed the participants on the recent RCC-convened first meeting of newly appointed MAP Coordinators, where governance, coordination and monitoring aspects of the plan were discussed.

The meeting hosts, RCC and the World Bank Group elaborately presented detailed activity plan envisaged for implementation of the WB6 MAP REA in the area of investments’ policy reform and promotion, that includes the timelines and deliverables expected until the next WB6 Summit in London in 2018.  This activity plan also reflects on the actions and responsibilities needed to be undertaken on the national level by relevant ministries and other national authorities.

“Development of regional investment reform agenda holds significant potential for regional economic integration in the Western Balkans. In that regard, we need to identify existing foreign directs investments (FDI) in the region, compile them in a comprehensive database, together with the barriers to investments existing on ground, so that we could design appropriate policy reforms to improve our region’s investment climate. These policy reforms will constitute the backbone of the regional investment reform agenda, which we are going to, jointly as a region, propose to our Prime Ministers for endorsement at the 2018 WB6 Summit”, said Dragana Djurica, RCC Senior Expert on Competitiveness, adding that the reform activities need to include promotion of investment opportunities in the region, to achieve its full potential.

Ivan Nimac, Head of Vienna Office of Trade and Competitiveness, World Bank Group, while presenting Regional Investment Policy and Promotion Project, pointed out that there was an obvious need for greater convergence of regional investment policies and alignment with EC standards, in order to unlock the region’s investment potentials.
„This is a complicated process, but it should result in concrete national policy reforms and targeted investment promotion, involving development of a model for regional promotion, and targeted action with increased effectiveness.”

Representatives of the WB6 Chamber Investment Forum (CIF), also established in Trieste at the WB Summit, presented their vision and potential role of the private sector in implementation and monitoring of WB6 MAP in terms of investment policy and promotion.

The RCC  used this opportunity to report on the work done under the regional Working Group on Mediators and Workshops on International Investment Agreements (IIAs) and Investor-State Dispute Settlements (ISDS), as important components of the investment policy, and presented the means of merging this work with that of the WGI.

The meeting, hosted by the RCC and the WBG, convened in its usual composition, gathering delegates from relevant ministries coming from the SEE Governments committed to the SEE 2020 Strategy, but also representatives of  Chamber Investment Forum (CIF) of WB6, Deutsche Gesellschaft für Internationale Zusammenarbeit (GIZ), and United Nations Commission on International Trade Law (UNICITRAL), and video contribution of European Commission's Directorate General for Neighbourhood Policy And Enlargement Negotiations (DG NEAR) representative. The Group provides a valuable forum for regional dialogue for harmonisation of investment policies and for development of joint promotional efforts.