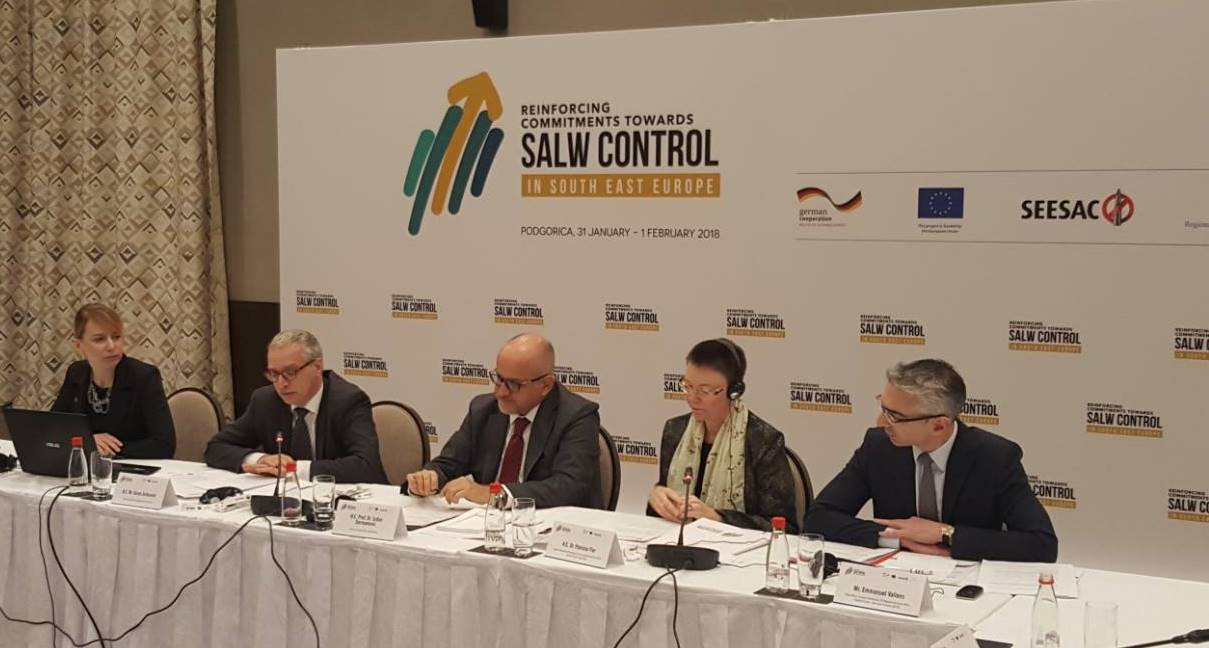 The Joint Statement represents a formal reinvigoration of the SEE authorities’ commitment to combat illicit trafficking and proliferation of SALW and their ammunition, as part of the overall process of EU integration. The Deputy Ministers fully committed to elaborate on a Roadmap on SALW for the Western Balkans, under the auspices of SEESAC and the Federal Republic of Germany, preparing it for adoption at the upcoming Western Balkans Summit within the Berlin Process due in London later this year.  The Roadmap shall precisely define objectively verifiable measures and targets devoted to small arms and light weapons control in order to comprehensively prevent, pursue and prosecute illegal possession and misuse of guns in the region.

The event, organized by the South Eastern and Eastern Europe Clearinghouse for the Control of Small Arms and Light Weapons (SEESAC) under the auspices of the Regional Cooperation Council (RCC) and Federal Republic of Germany, was opened by the host, Srdjan Darmanovic, Minister of Foreign Affairs of Montenegro.

Minister Darmanovic expressed Montenegro’s commitment to join the international community efforts in the fight against key security challenges in Europe and praised the efforts of SEESAC in the area of SALW Control. Welcoming the intensified engagement of the international partners in the region, he underlined that “a holistic approach is needed along with intensified regional cooperation, data exchange and capacity building” in order to efficiently address the challenges posed by illicit firearms trafficking.

Goran Svilanovic, the RCC Secretary General in his address commended the progress achieved in SALW over the last few years, particularly concerning adoption and implementation of national legislation, better coordinated cooperation and continuous confidence building, adding that the issue of SALW control remains one of the key challenges in security cooperation in the region.

“The previous meetings of the SALW Commissions have emphasized the need for standardization of approaches in combatting illicit traffic of firearms, the systematic collection and analysis of data in support of policies. Therefore, the RCC highly appreciates and supports the idea of producing a Roadmap for the Western Balkans on SALW, under the auspices of the South Eastern and Eastern Europe Clearinghouse for the Control of Small Arms and Light Weapons (SEESAC) and the Federal Republic of Germany, to be adopted at the London Summit in July, within the framework of the Berlin Process”, said Svilanovic, adding that the  RCC’s support will be invaluable in the process of defining policy tools aimed at ensuring a proactive and strategic response to the challenges we face.

Patricia Flor, Federal Government Commissioner for Disarmament and Arms Control at the German Federal Foreign Office reaffirmed commitment to the stability and security in the Western Balkans region, announcing intensified engagement and support in dealing with the issue of SALW control, as one of the pressing issues in security cooperation.

The meeting provided an opportunity for participants to elaborately discuss challenges that authorities in the region have faced in SALW control and the progress achieved in addressing them, as well as for identifying the needs and ways forward in strengthening SALW control.