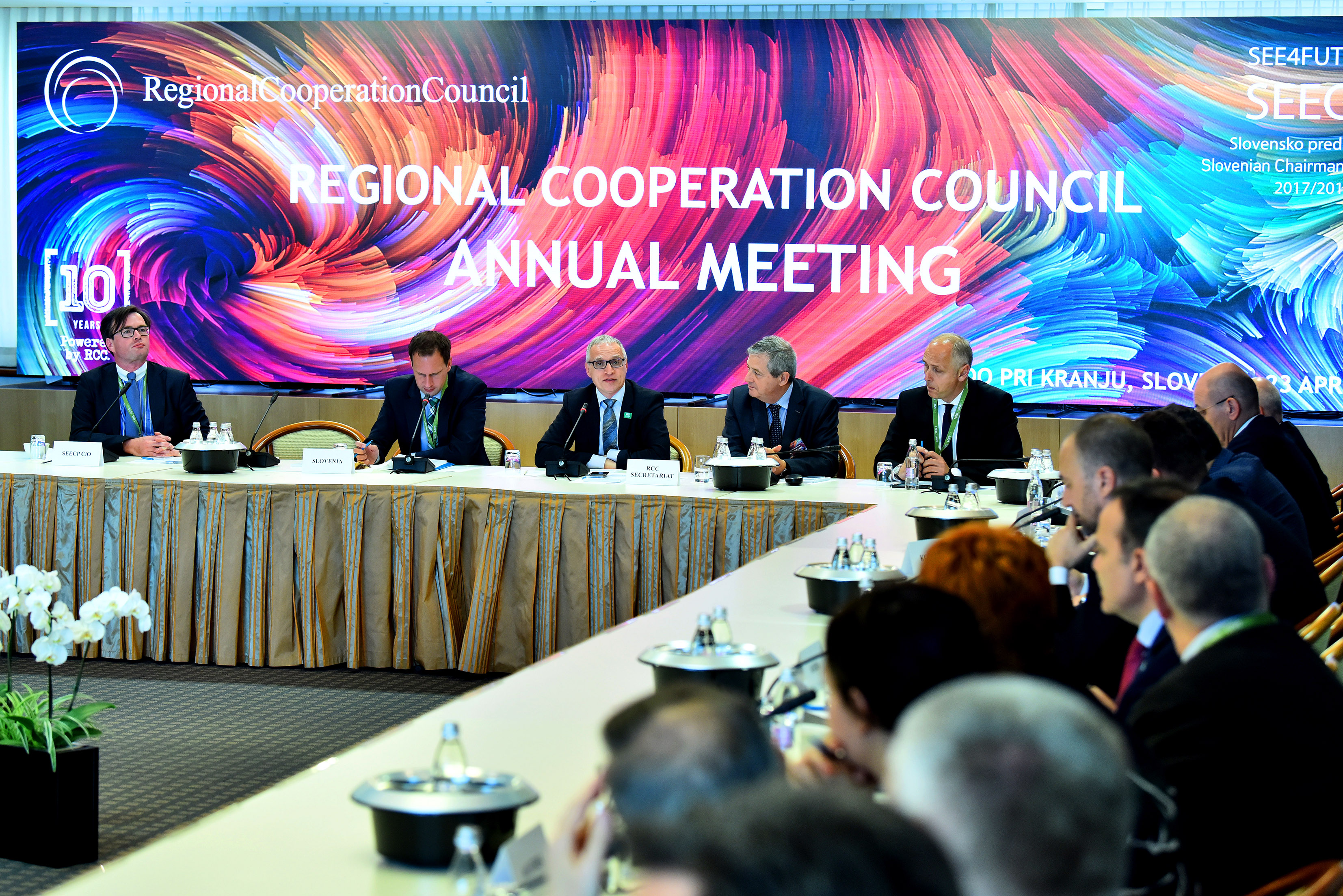 Brdo pri Kranju – The 10th Annual Meeting of the Regional Cooperation Council (RCC), held in Brdo pri Kranju today, endorsed the RCC Annual Report 2017/2018 and the nominations of Majlinda Bregu as the next RCC Secretary General for the term 2019-2021 and Igor Luksic for the term 2022-2024.

The meeting, co-chaired by the RCC Secretary General Goran Svilanovic and Matej Marn, on behalf of the Slovenian Chair of the South-East European Cooperation Process (SEECP), discussed developments in regional cooperation in South East Europe (SEE) within the RCC framework, as well as challenges ahead of the organisation.

While presenting the Annual Report, Secretary General Svilanovic said that this last edition of the Report will show the uplifting life of the RCC in the period 2017-2018, a path supported by a robust and efficient Secretariat.

“It has been my honour to serve as the Secretary General of an organisation that is truly regionally-owned and forward-looking. We would have never been able to walk this long path towards regional ownership without firm support of respective governments and ministers of all SEECP participants.”

“I am grateful for your guidance and readiness to help us confronting doubts and challenges with a strong commitment and resolution to keep up the vision of stronger, better connected and more vibrant region.”

Secretary General Svilanovic congratulated Bregu and Luksic on their nominations for the role of the RCC Secretary General, and wished them every success in their future work. He expressed readiness to assist the incoming Secretary General during the transition period, to ensure a smooth transfer of duties.

The RCC Secretary General thanked the Slovenian Chair and all the RCC participants for their support and contribution to enhancing regional cooperation in SEE through the RCC over the past almost six years.

While presenting the activities of Slovenian chairmanship of SEECP and announcing the final high-level SEECP events, Marn congratulated the RCC on 10 years of hard and committed work and great results it achieved so far. He thanked Secretary General Svilanovic for his two excellent mandates in this role.

“RCC grew to be truly regionally-owned organisation with an important role in areas of our common interest. During the Slovenian Chairmanship of SEE cooperation process we worked together to strengthen regional cooperation, bringing us closer together, to live up to the past year’s motto – SEE for the future.”

The Annual Meeting was co-organized by the RCC Secretariat and SEECP Chairmanship-in-Office of Slovenia. It is held back-to-back with the SEECP Meeting of Foreign Ministers and the SEECP Summit.