Svilanovic: Notable progress achieved in the implementation of Multi-Annual Action Plan on Regional Economic Area in the Western Balkans 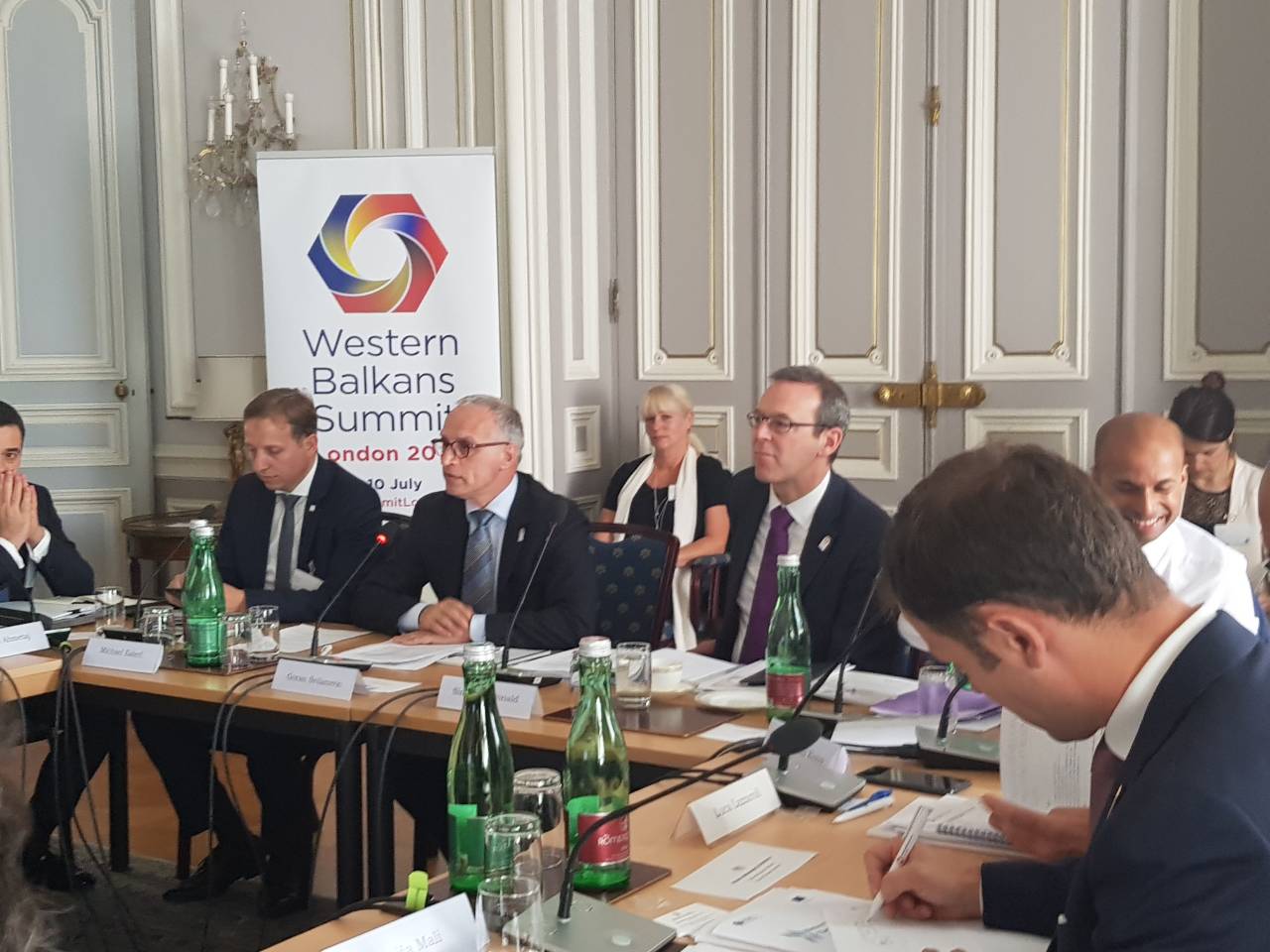 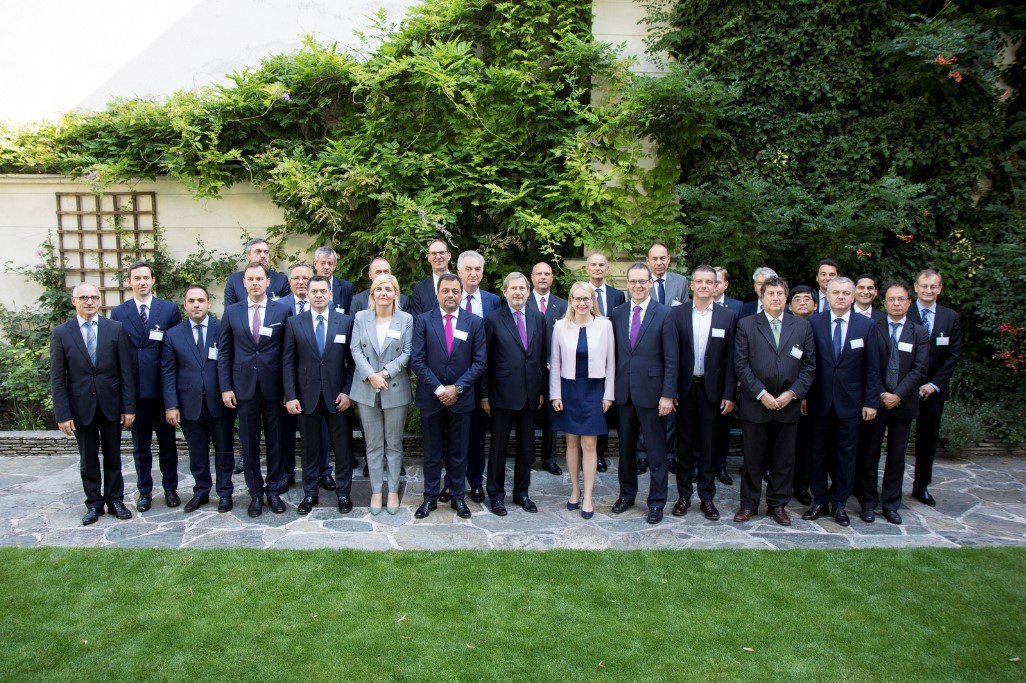 Participants of the meeting of the Ministers of Economy of the London Western Balkans Summit, held in Vienna, 4 July 2018 (Photo: RCC/Maja Handjiska Trendafilova)

Vienna – Secretary General of the Regional Cooperation Council (RCC) Goran Svilanovic presented key results of the implementation of Multi-Annual Action Plan on Regional Economic Area (MAP REA) at the ministerial panel dedicated to this topic of the Economy Ministers’ Meeting of the London Western Balkans Summit held in Vienna today.

Secretary General Svilanovic said that notable progress has been achieved in a year of the MAP REA implementation in all four segments of the Plan: Trade, Investments, Mobility and Digital Integration.

“Let me list some of the results: Endorsement of the Regional Investment Reform (RIRA) Agenda including a set of policy areas to be subject to reform and joint regional investment promotion agenda; Reached agreement to open negotiations on a Mutual Recognition Agreement (MRA) on Professional Qualifications for selected professions as well as endorsed principles for the Model of Automatic Recognition of Academic Qualifications in the Western Balkans (WB); Launched Digital Agenda for the Western Balkans and established structured high-level regional political dialogue on digital transformation of the region. And finally, something that we have been working together with our partners from CEFTA - CEFTA Additional Protocol 5 on trade facilitation entered into force. These are just highlights of many processes initiated within the MAP REA that are to yield desired results in the coming future”, said Svilanovic while chairing the ministerial panel session ‘Regional Economic Area - Progress and Way Forward’.

Svilanovic concluded that although the region has seen significant progress, there are still many tasks ahead of it, such as liberalization in trade services, RIRA promotion and implementation, finalizing negotiations on mutual recognition agreement on professional qualifications and agreeing upon models for recognition of academic qualifications, lowering roaming costs for full coverage of WB six (WB6) consumers and advancing in implementation of WB Digital Agenda. These are just several points and the full list of actions before the region is much, much longer.

European Commissioner for European Neighbourhood and Enlargement Negotiations Johannes Hahn in his welcome address thanked the RCC for its dedication and commitment in 'sheparding' the implementation of MAP REA.

“Regional Economic Area (REA) in the Western Balkans is a fundamental aspect of regional cooperation and key contributor to stability of the region. However, it is also an integral part of the EU integration process and catalyst for economic growth. REA has the potential of a game changer for region, as it is practical preparation for participation of the region in EU single market. The Commission will continue to closely follow up its implementation in the future. “

The success stories and the crucial role of MAP REA in economic cooperation and progress on four MAP focus areas has been presented at the panel, enabling exchange of experience and best practices between the economies and institutions/organisations participating in the meeting.

The meeting was informed on the results, as outlined in the Annual Report on MAP REA implementation, that is to be presented at the Western Balkans Summit in London next week. The meeting Chair issued Chair's Conclusions that welcome the progress made in implementing the MAP REA and the priority areas for 2018/19 outlined by RCC and CEFTA Secretariat on each of the four pillars.

The Conclusions confirm “the transformative potential of the REA, recognizing the importance of regional integration, and reaffirming the strong commitment to establishing the REA and to strengthening economic ties among Western Balkans economies and with the EU”, adding that REA is based on full regional ownership, with significant role the RCC and CEFTA Secretariats played in regional coordination and monitoring. They also entail a detailed overview of MAP REA achievements and next milestones.

The meeting was co-hosted by the UK’s Permanent Under Secretary and Head of the Diplomatic Service at the Foreign and Commonwealth Office, Simon McDonald and Austrian Minister for Digital and Economic affairs, Margarete Schrambock. It built on the achievements of previous Berlin Process Summits, the recent European Bank for Reconstruction and Development (EBRD) Western Balkans Investment Summit, and the Skopje Digital Summit. The meeting coincided with the start of the Austrian Presidency of the Council of the European Union, which will have as a priority a credible enlargement perspective for the Western Balkans but is also held in the eve of the upcoming Western Balkans Summit in London on 10 July 2018.

The Multi-annual Action Plan (MAP) for a Regional Economic Area (REA) in the Western Balkans Six (WB6), endorsed at the Trieste Summit of 12 July 2017, puts forward a strategic joint agenda for the Western Balkan economies to further regional economic cooperation with a view to unleash the potentials for growth, create conditions for better, transparent and predictable investment climate and improve the overall economic competitiveness of the WB6 economies. The actions introduced in the MAP REA are expected to be implemented until 2020, with some extensions until 2023, focusing on four key components: Trade, Investment, Mobility and Digital integration.