RCC Board meets for the 35th time 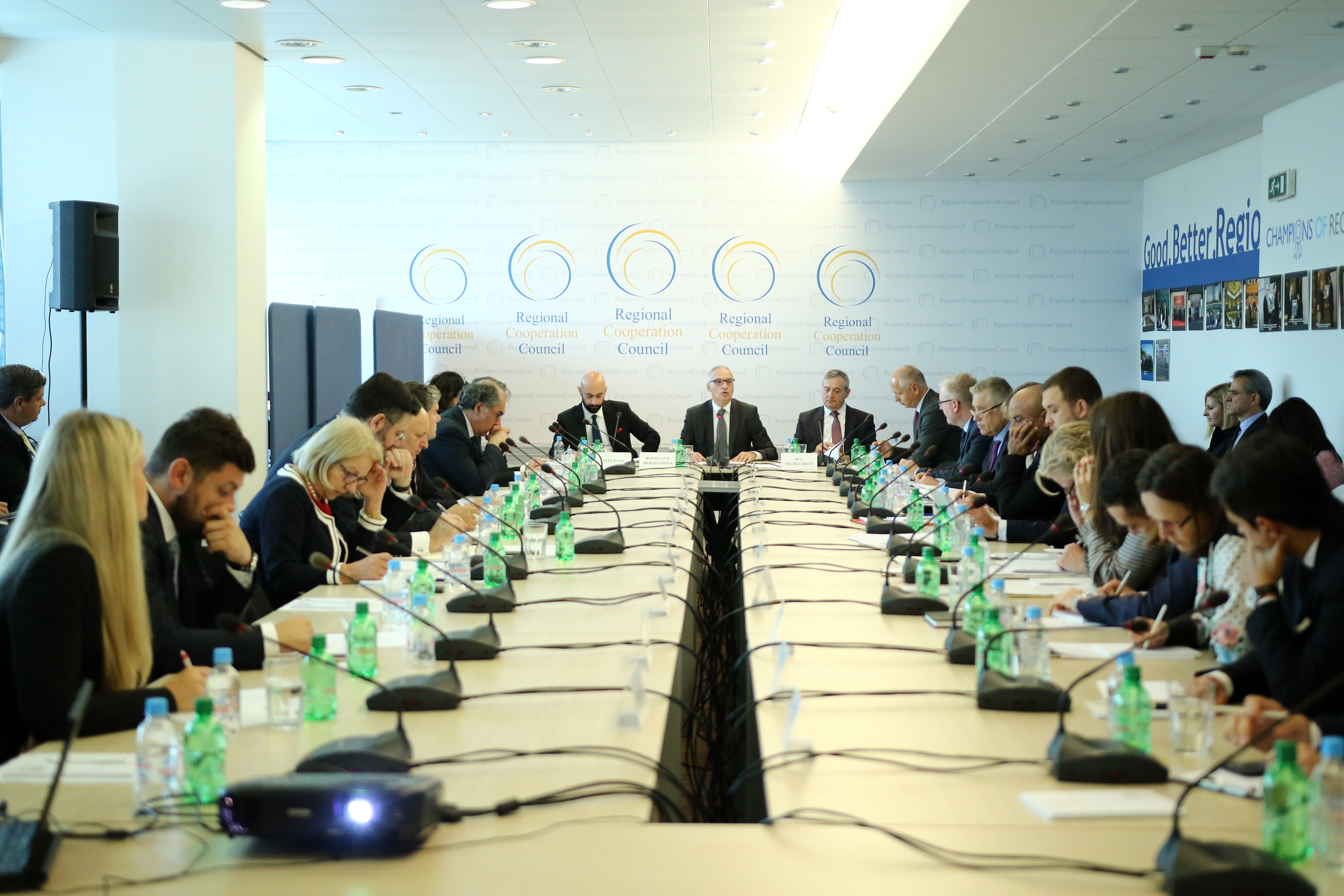 Sarajevo – The Board of the Regional Cooperation Council (RCC) met for the 35th time at the organisations’ Secretariat in Sarajevo, Bosnia and Herzegovina today.

Before moving to the formal meeting agenda the outgoing RCC Secretary General Goran Svilanovic used the opportunity to address the Board the last time in this capacity. Svilanovic reminded the present of the achievements of the region and the challenges it faced in the previous six years of his mandate adding that during this time the RCC has frequently been praised for its regionally-owned nature and activities on regional cooperation with various partners and stakeholders in the region and beyond.

“If we continue along this path of mutual respect in pursuing a greater cause of our regional cooperation, it would be quite easy to predict that RCC’s 15th anniversary will adhere to the irreversible progress in the Euro-Atlantic integration and socio-economic recovery of the region. The number of new jobs created will overpass the number of those who have no other dream but to leave their country and the region. Still, this is not RCC’s success only.  We would have never been able to achieve this without your firm support, without a clear guidance of the EU, your respective governments and support of all our regional partners”, said Svilanovic and thanked the Board for their support and understanding throughout his mandate.

In addition to the regular items of the Board meeting agenda including Report of the Secretary General on the activities of the RCC Secretariat for the period 15 March 2018 - 15 October 2018, and the briefing on the Coordination meeting between the South East Europe Cooperation Process (SEECP), RCC Secretariat and the EU, Board also reached a decision on mandating to the SEECP Chairmanship-in-Office  (SEECP C-i-O) to sign the Agreement on the Assumption of Duties with the new RCC Secretary General, Ms. Majlinda Bregu. The SEECP participants, at the meetings in Brdo pri Kranju in April 2018, in the framework of the Slovenian SEECP C-i-O approved the appointment of Ms. Majlinda Bregu as Secretary General of the RCC, starting from 1 January 2019 to 31 December 2021 and of Mr. Igor Luksic as Secretary General of the RCC, starting on 1 January 2022 until 31 December 2024.

The current SEECP C-i-O Bosnia and Herzegovina that has taken over the Chairmanship from Slovenia, has presented its priorities and activities to the Board, stressing importance of the informal meeting of the SEECP Ministers of Foreign Affairs in early September, which was an excellent platform to exchange views about how regional cooperation can contribute to making the region economically competitive, attractive and resilient, well-governed and evermore stable.

Furthermore the Board adopted the RCC Secretariat’s budget for 2019 and agreed on the dates of the RCC Board meetings the following year.

In line with the already established and very useful practice, the end of the meeting was reserved for a brief presentation of a regional partner. This time the RCC Board heard about mission and activities of the Integrative Internal Security Governance (IISG).