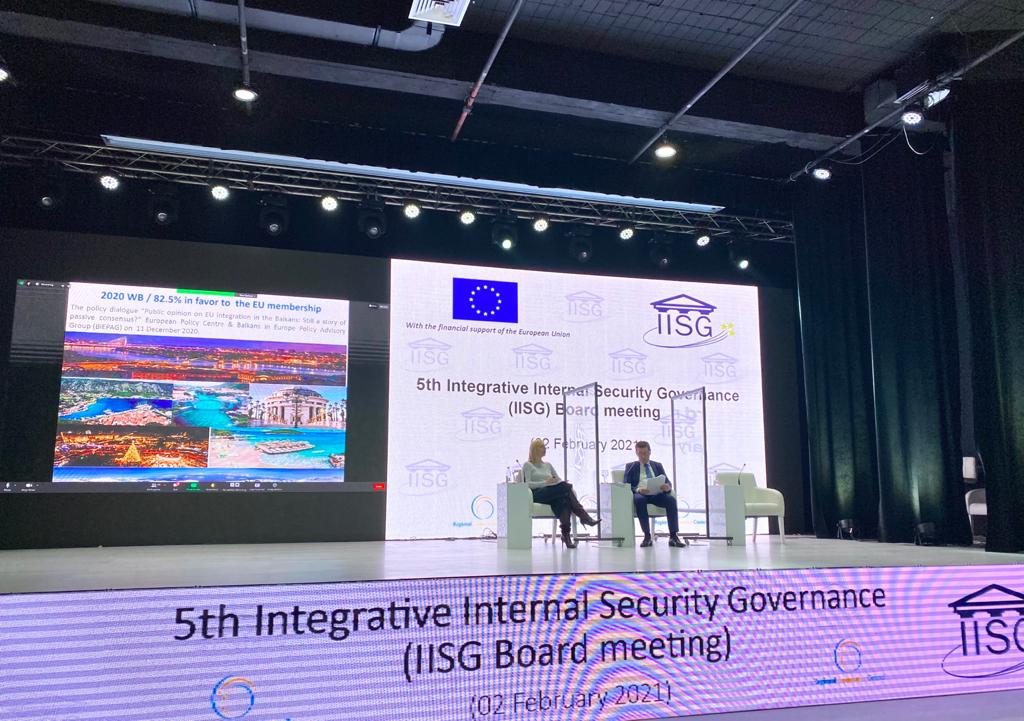 5th meeting of the IISG Board was held for the first time under the RCC umbrella in Sarajevo on 2 February 2021 (Photo: RCC/Emina Basic)

Sarajevo – The Western Balkan interior ministers adopted the annual work plan and the two methodologies of the Integrative Internal Security Governance (IISG), and also approved the membership of seven new IISG partners at the fifth meeting of the IISG Board held for the first time under the umbrella of the Regional Cooperation Council (RCC) in Sarajevo today.

“Security in the Western Balkans will be stronger with clear and firmer EU perspective. We are pleased to have Integrative Internal Security Governance (IISG) under the Regional Cooperation Council umbrella as confirmation of the regional ownership. Western Balkans and the European Union are partners and we should be together in this long process facing one of the biggest challenges of our times,” said Majlinda Bregu, RCC Secretary General at the opening of the meeting.

The ministers expressed their gratitude and appreciations for all the work the RCC and the IISG team have done in such a short notice. “Indeed security matters. This is especially important for enlargement because you will be contributing to Europe’s collective security,” said Maciej Popowski, Acting Director-General for Neighbourhood Policy and Enlargement Negotiations at European Commission’s DG NEAR, who was chairing the Board meeting.

Olivier Onidi, Deputy Director-General for Security, Directorate-General for Migration and Home Affairs also addressed the participants and expressed his satisfaction to have the IISG platform, adding that this regionally owned mechanism will help in building up further integration in a very important filed of security.

All new members (France, Italy, United Kingdom, FRONTEX, OSCE Mission in Bosnia and Hercegovina, the Deutsche Gesellschaft für Internationale Zusammenarbeit (GIZ) regional office in Sarajevo and Migration Asylum Refugee Regional Initiative (MARRI) Regional Centre) shared their gratitude for joining the IISG and expressed their support towards the Western Balkans, its security and the future EU integration of the region.

”We can say that the transition phase of IISG has been completed and we are ready to work together with our partners from Western Balkans and the world. Today IISG Secretariat is a team and all of us are fuel to establishing peace and security of the region,” concluded Agron Sojati, Head of the IISG Secretariat.

The meeting gathered 70 participants in two sessions. The next IISG Board will take place in July 2021.

The IISG has been initiated as part of the EU’s decisive action to improve cooperation with the Western Balkans on security issues. The concept enables a coordinated, aligned, and sustainable effort in the major fields of internal security governance reform on part of the EU and all relevant international donors of external assistance. As of 4th April 2020, IISG was merged with and under the RCC which will coordinate one of the most important agendas of the region: security. More information