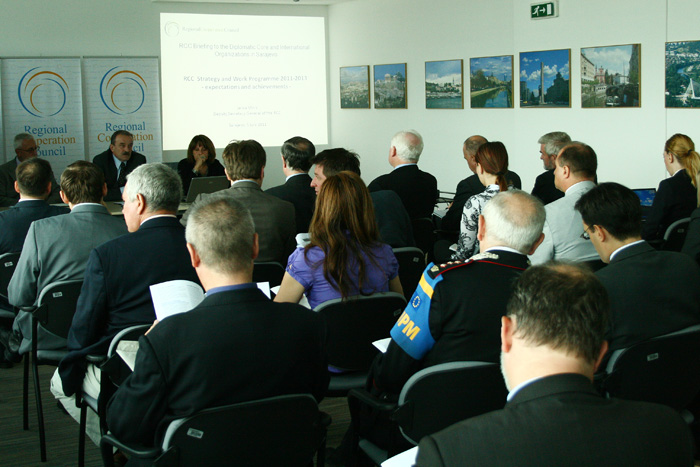 RCC Secretary General recalled a series of praises the organization received by RCC members as well as SEECP heads of state or government and ministers of foreign affairs last week in Budva, who endorsed his Annual Report on regional cooperation in South East Europe 2010-2011.

“The regional cooperation in South East Europe is on an evident rise, with the RCC being recognized as a leading platform guiding the cooperation”, said Biscevic.

“The time is now ripe to translate positive trends into irreversible processes and include a wide range of stakeholders – governments, businesses, parliamentarians, civil society, think tanks, etc. – into design and implementation of concrete regional projects of a large-scale, transnational nature, especially in the field of transport infrastructure.”

The RCC Secretary General commended a successful cooperation with the outgoing SEECP Chairmanship-in-Office of Montenegro and announced tomorrow’s visit to the RCC Secretariat in Sarajevo of the SEECP Chair, Serbian President Boris Tadic.

Finally, he congratulated Croatia on finalizing negotiations for the European Union membership and expressed satisfaction that such a development would serve as an impetus to other countries of the region to further reforms and speed up their European integration.

The briefing gathered around 20 representatives of the diplomatic community in Sarajevo.

The Annual Report of the RCC Secretary General on regional cooperation in South East Europe 2010-2011, outlining the achievements more in detail, is available HERE.