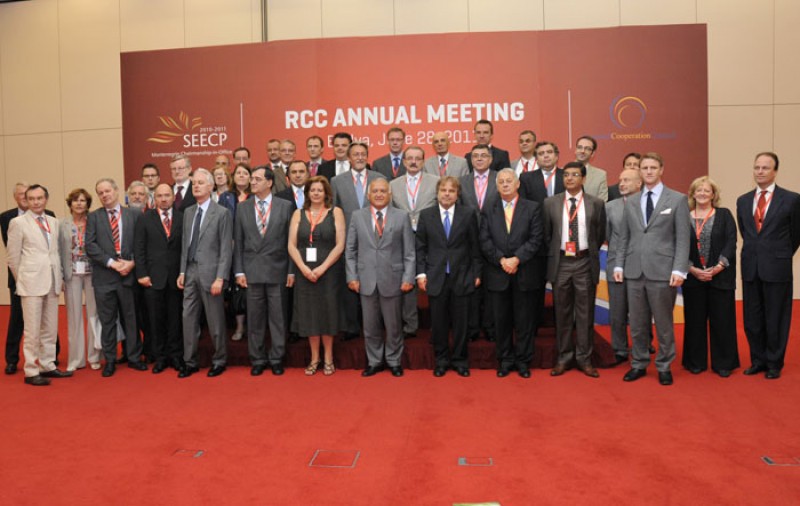 Participants of the third RCC Annual Meeting held on 28 May 2011 in Becici, Montenegro. (Photo: Courtesy of Montenegrin Government)

Bregu: Western Balkans needs to switch its development trajectory from ...

Bregu: Pandemic created a common awareness that at least for now humankind ...

Bregu: No brilliant regional plan can succeed without strong political ...

interview/article
My “whack a mole” questions on Innovation, Op-ed by Majlinda Bregu, ... 19 Feb 2020

The third Annual Meeting of the Regional Cooperation Council (RCC) was held in Montenegrin town of Becici near Budva, on 28 June 2011. It will be co-organized by the South-East European Cooperation Process (SEECP) Chairmanship-in-Office of Montenegro and the RCC Secretariat.

The RCC Secretary General, Hido Biscevic, presented the organization’s Annual Report on regional cooperation in South East Europe 2010-2011 with emphasis on the results achieved in the implementation process of the RCC Strategy and Work Programme 2011-2013. The report was endorsed by the meeting participants, who also exchanged views on developments in regional cooperation in South East Europe within the framework of RCC and challenges ahead.

The RCC Annual Meeting meets at the level of Senior Civil Servants or above. It is open to other countries, international organizations and partners as guests upon request to and/or the initiative of the Secretary General.

Agenda of the meeting is available HERE.

The 2010-2011 Annual Report of the RCC Secretary General on regional cooperation in South East Europe is available HERE.

Press Release on this event is available HERE.

Address by RCC Secretary General Hido Biscevic at this meeting are available HERE.

Address by Minister of Foreign Affairs and European Integration of Montenegro, Milan Rocen, is available HERE (in Montenegrin only).

Video from the event is available HERE.