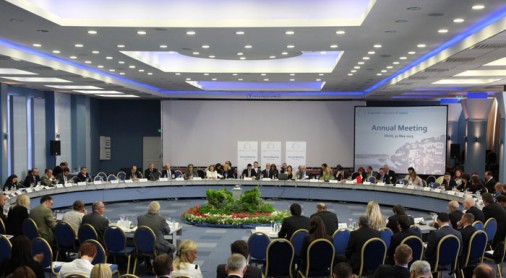 The Annual Meeting of the Regional Cooperation Council (RCC), was held in Ohrid on 30 May 2013. It gathered representatives of the 46 participants of the organization.

The RCC Secretary General, Goran Svilanovic, presented the organization’s Annual Report on regional cooperation in South East Europe 2012-2013 and the RCC Strategy and Work Programme 2014-2016. The report and the strategy were endorsed by the meeting participants, who also discussed developments in regional cooperation in South East Europe within the RCC framework.

The event was co-organized by the South-East European Cooperation Process (SEECP) Chairmanship-in-Office 2012-2013 of The Former Yugoslav Republic of Macedonia and the RCC Secretariat.